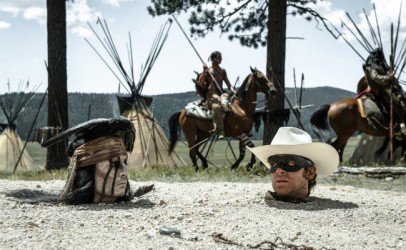 The MPAA is a joke. A bloody, laughable farce. This film is  proof that a PG-13 rating is completely meaningless. The villain cuts the heart out of a law enforcement officer, and eats it! Hundreds of Comanche get mowed down with machine guns (the Comanche tribe should sue for libel- no band of Comanche was ever so stupid as to make a frontal charge against massed infantry). If ever there was an R-rated movie that bribed its way into PG13, it would be The Lone Ranger.

Your summer blockbuster fiasco is here. If this film is recalled at all, it will be as a screaming example of the stupidity of film-making by the decrees of corporate committees and focus groups. It’s a movie that tries to be a lot of genres- comedy, western, superhero film, action- but fails to commit to anything, and that ultimately amounts to nothing. How I loathe this film such that I will call each strike observed.

Tell me if you know this story: a Southern cavalryman, the noble agent of the social order of Dixie, is gunned down, along with his comrades-in-arms, by treacherous criminals. He is thought dead by his enemies. At night, he rises, puts on a mask, and dresses in white. On a horse he rides the land bringing terror to the corrupt forces of crime and order alike- masked justice, vigilante justice.

Ironically, the inspiration for the Lone Ranger was Bass Reeves, the first African-American US Marshal. Bass Reeves was a slave who beat up and escaped his master, mastered the way of the gun with training from the Seminoles, raised ten children in Confederate Texas, became a lawman in Indian territory, served as a deputy for 32 years, made 3,000 arrests (including his own son), and killed fourteen men in gunfights, all while sporting one of the most impressive mustaches ever worn by a human being. There have been five films made about the fictional Lone Ranger. There have been no films made about the historical life of Bass Reeves.

Strike 1: The film is supposed to be The Lone Ranger, not The Lone Greenhorn. Inexperienced district attorney John Reid (Arnie Hammer) returns to bring civilization and law to frontier Texas, near Comanche territory. He accompanies a posse that sets out to retrieve the odious fugitive Butch Cavendish (William Fichtner), only to see his fellows and his brother slaughtered in an ambush. Â Strike 2: hero rule #483: I will never assign the task of scouting to the most alcoholic, womanizing member of my posse/team/taskforce, as said person has obviously been bribed by my enemies and is setting up a trap for the rest of us.

Strike 4: The Lone Ranger is aversive to the idea of vigilante justice (wtf?), despite the original character being famous for using silver bullets and silver revolvers. While he argues with Tonto, train baron Cole (Tom Wilkinson) makes moves on the Ranger’s love interest, Rebecca (Ruth Wilson). Strike 5: There’s also gold-hearted brothel madam Red Harrington (Helena Bonham Carter), peacocking Captain Fuller (Barry Pepper), and Chief Big Bear (Saginaw Grant), a.k.a Chief Crying Indian. Give me a freaking break. Strike 6: This movie isn’t very good to Chinese people either. At least Disney had the sense to leave African Americans alone for a change. Strike 7: This film is also saddled with not one, but two annoying boys who act insufferably.

With this film, Gore Verbinski has exhausted and erased any credibility he might have earned from The Ring and Pirates of the Caribbean. The only thing he gets right is the stunt choreography. The CGI is horrible, and he should have sued either the Moving Picture Company, Match the Motion, or Industrial Light and Magic. Strike 8: You’d think that with three CGI companies that someone would have gotten the effects to be less than egregious. The worst part is the animation of the creatures- those phony buffalo will be haunting my dreams tonight. Verbinski doesn’t edit his film well, the film is at least a half hour too long, and it jumps abruptly from trying to develop one theme to another without any internal consistency. Strike 9: This film is bloated with briefly addressed subplots that are spurious and underdeveloped. Strike 10: Right from the beginning, the film uses the narrative-framing device of a young boy talking to an aged Tonto (Depp in a ridiculous and horrible aged suit that would shame an Austin Powers film). From that first scene it was obvious that this movie was going to be a shambolic crap-herd.

Demerits for everyone that acted in this film. Strike 11: I am bored with Johnny Depp- another phoned-in performance where thinks that ladling on the quirkiness is the only ingredient for acting. Strike 12: Also, Depp commits dramatic plagiarism- his entire tone and diction is stolen wholeheartedly from George Farmer’s performance as Exaybachay in Dead Man. Stupid Fucking White Man. I suppose since nobody saw that film, you can just take your recollection of that and re-do it. Strike 13: Arnie Hammer is annoying and dislikable; the script may have minimized his opportunities to display confidence or charisma, but he squanders even those minimal chances. Carter is a bland log with a bad hair dye. Tom Wilkinson is less threatening than George Zimmer of the Men’s Wearhouse. Bryant Prince and Mason Elston Cook aren’t the first child actors that I’ve wanted to shoot, but they are the latest. William Fichtner does a leprous villain, which is one more knockoff from Dead Man, this time from Lance Henriksen’s Cole Wilson (who was far scarier with fewer lines).

Hans Zimmer flubs the soundtrack, attempting to evoke hints of Ennio Morricone, but going largely nowhere, before reluctantly (almost sheepishly) breaking out the William Tell Overture. Like everybody else, you get the sense that he didn’t put his heart into this project. Supervising Art Director Jon Billington gave us a movie ostensibly in Texas, that never looks like it’s in Texas- it’s all Monument Valley and Grand Canyon. The makeup team is garishly overdone. The visual effects teams should be ashamed, especially the creature effects team, for what little they have managed given the budget and time they were allocated.

There are two teams that deserve credit: the Foley team, and the stunt directors/choreographers. The stunts were well blocked; the sounds had a creative range. They are the pearls amongst the manure of this movie. 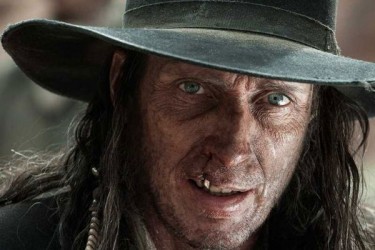 Strike 14: This film has a disgusting moral vacuum at heart. The protagonist is consistently mocked for refraining from the abject violence that swirls around him. Devotion to law and non-violence are treated as comic, rather than heroic characteristics. Strike 15: The film blithely and lightly handles the genocide of the Comanche people. The Indian Chief dies in the hands of the briefly startled cavalry captain. Never has the slaughter of hundreds seemed so perfunctory. Disney keeps trying to make the Holocaust funny, but they just never succeed the same way Spielberg has.

Strike 16: This film cribs poorly from earlier, superior westerns. You have the trains as metaphor for progress of Once Upon a Time in the West. You have theme of the dead greenhorn taught to pursue revenge by a Shaman, used in Dead Man. You have the theme of ‘life/nature out of balance’ of Koyaanisqatsi; there’s the big shoot out at the meeting of the transcontinental railroad, like in Wild Wild West. This movie steals ineptly from the Western flop of the 90s- smart idea there, Bruckheimer.

Final kvetches: Strike 17: You should never trust a film that only uses a character’s signature catchphrase for the purpose of making fun out of said catchphrase. Strike 18: Earlier, I mentioned how this film insulted the tactical intelligence of the Comanche warriors; Texans should also be angered by this film as it depicts Texas Rangers as a bunch of dumbasses (single-file into a canyon- seriously?). Strike 18: I never knew that silver ore could be such a soft, absorbent cushion to land upon. Strike 19: Tonto is overfeeding that dead crow that he uses for a chapeau. Strike 20: Non-scabby/leprous bandits would be refreshing. Strike 21: Heroes are immune to shrapnel and debris. Strike 22: Being three feet away from an exploding bundle of dynamite will knock you down and singe your clothes so long as you have a part involving more than one scene. Strike 23: Horses enjoy drinking beers and eating scorpions. Strike 24: horses have no compunctions about jumping off of burning barns and speeding trains, because their legs are made of invulnerable rubber. Strike 25: No silver bullets were fired during this film. Strike 26: Comanche children would not have heard of a Wendigo, unless they heard it from an Ojibwa (Wendigo is an Algonquian monster). 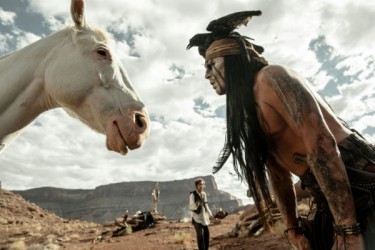 I would like to strike Gore Verbinski 26 times with a blunt tomahawk for making this misbegotten quagmire of a film.

However, I will give the director due credit for addressing the important role of vampire cannibal rabbits in the history of West Texas. Anglophilic Hollywood has long shied away from the depiction of cannibal vampire rabbits in the Old West, but Verbinski had the sensitivity and taste to deftly portray this often-overlooked aspect of the West.

Fair Value of this Film: -$12.00– Do you want to know what you can do with the money it would cost to see The Lone Ranger? You can rent Once Upon a Time in the West, Dead Man, Bury My Heart at Wounded Knee, Koyaanisqatsi, and Wild Wild West, and you will have a much better time. At least Wild Wild West featured giant mechanical spiders, and it also had characters that went against racial stereotypes.