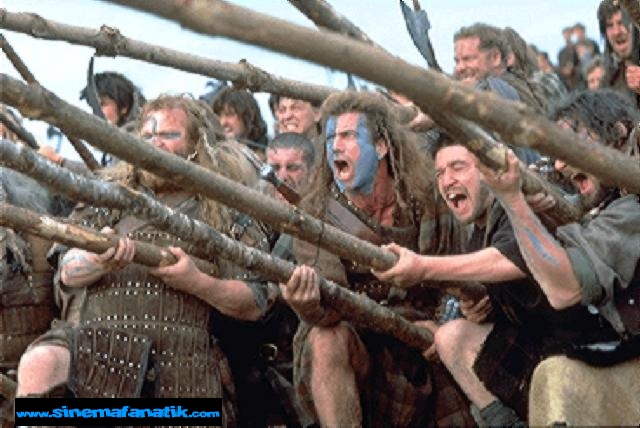 Braveheart is the partly historical, partly mythological, story of William Wallace, a Scottish common man who fights for his country’s freedom from English rule around the end of the 13th century. From IMDB.com

Mel Gibson stars as Sir William Wallace, the only man in 14th century Scotland without facial hair or a mullet. He also speaks four languages and is the best fighter in Scotland. You probably want me to get back to the mullets. Man, does this movie have them! From snot faced young boys to the King of fucking England, history shows that mullets once dominated the fashion scene of the British Isles. To further differentiate his character, Gibson has real long, clean, girly hair – but alas no Mullet. However, he does this weird thing where he pulls the front part of his coiffure back as if he were trying to ape a mullet. As if his hair thinks that they are filming another Lethal Weapon and just can’t get rid of that mulletous feeling. In other words the hair wants to be a mullet, but Gibson is saying no. It is an interesting struggle to watch as the rest of the three-hour blood-fest unfolds.

It turns out that Braveheart is as historically accurate as Bruckheimer’s Pearl Harbor. Which, considering that they were both written by Randall Wallace is no surprise. I am sure it turns out that R. Wallace is related somehow to Sir William Wallace and he felt he was doing some sort of an honor to his family. I’m sure he got married in a kilt, too. If not, then he definitely got a hard on when he wrote the part about “outlawed tunes on outlawed pipes.” Scottish pride motherfucker – yawn I think it becomes fairly clear to anyone that watches Braveheart that you are in fact watching a cartoon. W. Wallace, Hamish, (Brenndon Gleeson) Morrison (Tommy Flanagan) and the rest of their macho buddies kill one hundred people each. At least. It would be like watching a Schwartzeneggar movie with a dozen Arnolds on screen all the time killing everything and everyone in sight. Totally gratuitous and a little silly. All of the battle scenes in Braveheart are rad and awesome and will blow you away, but are also totally fanciful. Plus, if you pay attention to what the extras are doing in the background while Gibson is eviscerating a Brit in the foreground, you see a bunch of Renaissance Fair enthusiasts bashing each other with their cudgel sticks. A little more attention to detail would have been welcomed.

There is a love story that is mostly unbelievable. Again, the writer wrote Pearl Harbor so this should be no big surprise. In a typical stupid, sloppy Hollywood fuck up, they have young ten year old William Wallace and even younger five year old Murron exchange a flower at Wallace Senior’s funeral. Then, twenty years later when Wallace suddenly waltzes back into the bog, he tells Murron, “I’ve always loved you.” The thing is, that young Wallace left the day after his father’s funeral to travel around Europe with his ugly uncle Argyle where he becomes much smarter than the entire population of Scotland put together. In other words, the last time Wallace saw Murron, she was five years old. As a viewer, you are expected to buy this stupid romance. Especially considering that the love between Wallace and Murron is pretty much the impetus behind the whole story. Wallace becomes Braveheart only after Murron’s death. The setup makes no sense. I mean, would it have killed the writer to say something like, “When I left, you were just a wee lass who used to wipe her boogers on me burlap tunic and pull the pigtails of me mullet. Now you are so bloody hot that not only do I want to fuck you in half, but I’d like you for me wife, as well.” But no, we get cornball, Hollywood crap. And we are just expected us to swallow it. I couldn’t. The unbelievably of Wallace keeping a flame going for a five year old just tainted the whole rest of the movie for me. I mean, even if she was a hell of a five year old You get my point. And, Wallace and Murron have the least compelling sex scene in the history of film. Somehow they get naked in front of a waterfall on their honeymoon night and she has her back to him and he grabs her shoulders Even my dog looked confused. Kevin Costner would have considered it really hot. Plus, there was an overly obvious fifteen-year age gap between Gibson and Catherine McCormack who played Murron. Ham fisted I tell you! It felt like the writer had the most conservative Norman Rockwell masturbators in mind when he penned that scene. Does anyone really believe that little fucking kids would fall in love like that?

Once Murron dies, the movie gets pretty good. Like I said and as you know, there is tons of bloodshed and carnage. At one point Gibson drives a spiked hammer through a Brits helmet, and blood even squirts on the camera lens. Gnarly! Wallace delivers some pretty rousing speeches which sound a little too much like something Patrick Henry might have said, but the Masons in the US are all from the Scottish Lodge, so who knows? I am a sucker for that kind of thing. Freedom, honesty, bravery, etc. Thank God I can sit around in my boxers with a can of High Life watching it on the TV instead of having to live it.

I watched Braveheart at my Mom’s house. She’s got a huge flat screen TV and a surround sound system that breaks glass. The sound is particularly good. Yeah, the operatic bagpipes got real old after thirty-four seconds, however the battle scenes sounded great. The photography looked nice, too. However, on my Mom’s TV, Erkel reruns look really fucking cool.

Typical crap plus a making of documentary where Gibson says some things about the movie. He loved Scotland, the crew was great, vomit. I tuned out and watched my dog chew on his bone.