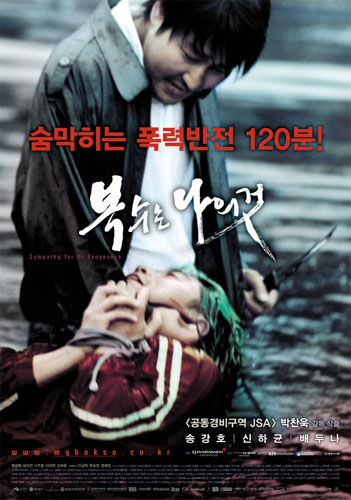 One of our Danish Readers, Steen, was nice enough to send me a… uh… legitimately purchased, fully licensed copy of this DVD, which is unfortunately not available in the U.S. So firstly, thanks to him. Everyone should learn from Steens noble example and send me free stuff. P.S. Steen, Jonny says that a certain… genre of film that is illegal elsewhere is still legal in Denmark and he wants you to hook him up.

So on to Sympathy for Mr. Vengeance. Its one of the darkest films Ive ever seen, and certainly the darkest comedy Ive ever seen. Its best to be surprised by each event as it pushes the story into darker territory and expands the misery of the characters, so Ill describe one of the earlier scenes. We see a group of boys franticly beating off with ears pressed against the wall, listening to the moans of the woman next door. One says, This is great! Pan through the wall to the terminally ill woman, writhing about her bed in agony. Pan to hear deaf mute brother, happily slurping noodles with his back to the whole scene. Funny, huh? It gets much worse.

The rest of the story involves the brothers increasingly disastrous attempts to save the sister, and two, ice blooded campaigns of revenge, reminiscent of Serpents Egg by Japans Kiyoshi Kurosawa (if you like this, see that, if you like that, see this). Sympathy also reminded me of the Coen’s The Man Who Wasnt There, because both films are driven by the idea that decent people, making sensible decisions in difficult circumstances can create a web of evil. There is only one malicious group of minor characters in Sympathy. Everyone else acts sympathetically, yet they wind up murdering, kidnapping, torturing and mutilating innocent people. Its The Man Who Wasnt There taken to the extremes of Titus Andronicus. And played for laughs.

Making a laugh-fest out of this story might seem inappropriate to some, but I found it to be the perfect approach. One function of humor is to cope with our unlimited capacity for creating and enduring misery. Moreover, the film portrays the absurdity of our behavior and perhaps even our existence. You can either say look how fucked we are, Im going to listen to Morrisey and cry in bed, or look how fucked we are, I might as well find some humor in it. Im disposed to the latter.

Sympathy for Mr. Vengeance sounds like the work of a director hoping to grab international attention with shock value, and perhaps even is that to an extent. Yet, as with films by folks like Haneke, Noe and Miike, I was somewhat surprised to find the work of a very skilled filmmaker. Parks film is beautifully photographed and composed, very well acted, well scripted and well plotted. The guy is just an excellent filmmaker. So its not surprising he received accolades at Cannes this year. Perhaps many talented young filmmakers are drawn to the extreme dark side of life because its inadequately explored in cinema historically. In any case, writing this film and others like it off as shock entertainment would be foolish.