Yeah Man. The Getaway is a good fucking movie. Ruthless
to its core and never dull. You’ll like it even more if you forget the
basic plot structure, as it was just a frame for our man Peckinpah to
hang another of his gloriously violent and beautifully misanthropic
canvases upon [Ed Note: Apparently, Peckinpah and leading man McQueen
had some serious disagreements about the film, leading to Peckinpah
eventually “disowning” the finished product after the studio decided to
back McQueen]. Maybe it’s just me, but I’m sick to tears of the whole
noble-criminal thing, and even though this film came out a few years
before I was born the idea of a criminal making “one last score” is
stale, stale, stale. Career crooks are fucking cheater assholes, plain
and simple. So do what I did and just get past that part. And if you
are able to, you will be handsomely rewarded with a superb movie about
a strained but worthwhile and important relationship (at least from the
perspective of the two protaganists), and the price that must be paid
to maintain it. 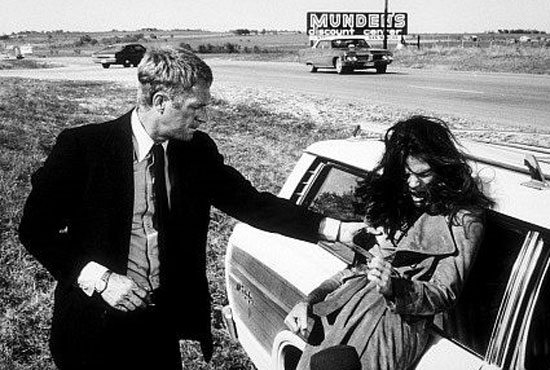 Steve McQueen stars as Doc McCoy, a con who just can’t take
being locked up anymore, especially after the parole board rejects him.
He essentially has to hand his wife Carol (Ali MacGraw) over to one of
the most powerful crime bosses in Texas, Jack Beynon (Ben Johnson), for
only someone so totally corrupt would be able to talk any sense into
the state parole board. Of course, now Doc owes Beynon; criminal hi
jinks ensue. But I’m getting ahead of myself, for Peckinpah is simply
the master of sequences like this. First of all, the opening credits
are just revolutionary (thank you Freddie). Essentially, while the
credits are playing, Doc is getting rejected for parole. However,
running concurrent and slightly backwards is a great montage of
Doc trying and failing to cope with prison life. After all is said and
done, the viewer wants nothing more than for Doc to be let out. The
tension is intense. Also good–as well as subtle and daring–is what
happens when Carol goes to bargain for Doc’s release with Beynon. Not a
word about her having to fuck him is mentioned, but the scene is played
so well, that when he asks if she could use a drink and she accepts,
explaining tahe she could “really use one,” you know exactly what the price is going to be.

I really can’t go on much further without mentioning Al
Lettieri. He plays Rudy, the main bad guy. What a performance! Consider
all the sophistication, preening and cool that McQueen brings to the
screen. Now consider its antithesis. That’s Lettieri. A brooding,
swarthy, beast of a man who is so pure in his wicked vulgarity and so
joyfully crude in his dealings that you can’t help but root for
him–just looking at him makes you smile. Truthfully, the swinging yang
to McQueen’s fussy ying. After a bank heist goes wrong, Rudy tries to
double cross Doc and Carol by killing them and stealing the money.
Actually, he probably wouldn’t have killed Carol; rather, Rudy would
have enslaved her. Keep reading. Anyway, Doc is too weary to fall for
Rudy’s plan and he gets the drop on his former partner, shooting Rudy
at least five times. Earlier though, Rudy made a big stink about not
wanting or ever needing to wear a bulletproof vest; of course, in
reality he’s wearing one. So even though Doc keeps squeezing the
trigger until he sees blood, he doesn’t critically wound Rudy. He fucks
him up real good, though. This necessitates one of the more twisted,
depraved and outright bizarre films-within-a-film I’ve ever seen. 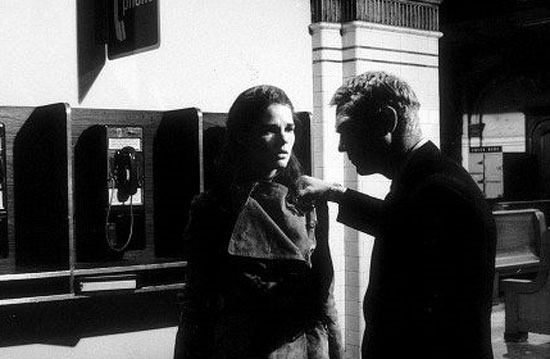 Basically using the raw hated he now has for Doc, Rudy painfully
picks himself up and drives to a veterinary office. There he meets
Harold and Fran Clinton (Jack Dodson and Sally Struthers,
respectively), waving hello with his big gun. Over the course of the
film, Rudy simply terrorizes poor Harold while simultaneously seducing
Fran–right in front of the husband! At one particularly demented
point, Harold is tied up in a chair and forced to watch as Rudy sucks
on a chicken wing while Fran is playing with the kidnapper’s gun. Going
so far as to point the thing at her own husband and go “bang.” Rudy,
while Fran is rubbing up against him, sardonically grimaces at Harold
with a “sucks to be you” look that is one of the better expressions
ever captured on film. Eventually, Rudy finds Harold dead in the
bathroom of a hotel; Harold has hung himself. Rudy’s reaction? He
shrugs, lights a cigarette and takes a shit. While the man is hanging
there!! Al Lettieri gets his own banner.
(Argh! After a google search, there does not seem to be any images of
Lettieri on the web. if anyone finds one, please pass it along). Sure,
McQueen kills him in the end, but I mean, McQueen kills everybody
in the end. See the director. Still, I wouldn’t have minded if Rudy
would have gotten the money, for he had already gotten the girl.

I mentioned it briefly above, but one thing that separates The Getaway
from the chaff of most crime sagas is Peckinpah’s fantastic use of
tension. Anxiety permeates the movie in the best sense. You know how in
Jaws the darkest, scariest parts are when there is no shark, but
rather the knowledge that soon there will be a shark? The same
narrative apparatus is at work here. For instance; Doc and Carol have
been running all over Texas with a leather bag containing $500,000 in
stolen money. They’re about to hop a train to El Paso. Doc is busy
ditching the car and Carol is left to wait for him in the station. She
grows weary of holding the bag, decides to put it in a locker, and
falls victim to the old “let me help with your bag,” key-switcheroo
grift. Doc shows up and they ID the thief. For the next ten minutes,
Doc is in pursuit of the man and the re-stolen money. I almost chewed
my finger off in anticipation. I mean, I knew Doc was going to
get the money back and I also knew that he would do so in a violent way
(again, Peckinpah: Doc elbows the man in the face until he’s
unconscious) but the means to that end, the nervous waiting, was much
more satisfying than the payoff. And that’s hard to do.

Also of note is a sublime cameo by none other than the great
Slim Pickens at the end of the film immediately after the trademark
Peckinpah cartoonish shooting gallery climax. Pickens has a truck and
Doc and Carol force him at gunpoint to drive them “quietly” across the
border. And while he doesn’t get to deliver any “Well, I’ve been to one
world fair, a picnic, and a rodeo, and that’s the stupidest thing I
ever heard come over a set of earphones” caliber lines, he does manage
to quip, “I’ve been in trouble with the law, too, you know.” And that
line expertly softens the film. Not in a any sort of copout way, but
rather in a delicate, gentle, almost soothing fashion. One that works
well; the perfect ending, really, for the film finishes with a sense of
playfulness that the now deceased Rudy alone had been bringing. A sense
of playfulness that is the only excuse, and indeed the payoff, for such
a spastically violent film. Good show all around. And yes, Ali MacGraw
makes that face almost the whole time. Especially when McQueen is
bitch-slapping her. Which he does. A lot.