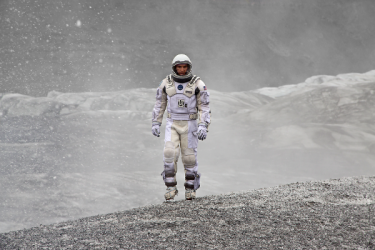 Fair Value of Interstellar: $22.00. In this instance, Christopher Nolan’s strengths outweigh his weakness as a film-maker, producing a dazzling and intriguing film that stands as a worthy heir to other hard science fiction classics such as 2001: A Space Odyssey and Contact.

Praying to the Alien: Cooper (Matthew McConaughey) exists in a dreary eco-dystopia that’s equal parts the nightmare of Ayn Rand and Richard Dawkins. Instead of meeting his calling as an astronaut, he is farming corn in a dust-stricken plain of what was New York. America has reverted into a luddite socialism in the wake of world war three, even as dust storms ravage the sky, and a bioweapon called ‘the blight’ gradually kills off all of the food crops.

Cooper’s tracking of a magnetic anomaly leads him onto the discovery of an area-51 type secret NASA base, under the leadership of Professor Brand (Michael Caine). Of course, our corn-fed everyman is going to be recruited for a dangerous mission despite being a disaffected washout. There’s a worm-hole near Saturn that may be an attempt at contact by an alien civilization. Or possibly it will lead to habitable planets that humanity can flee to. Anyways, it’s up to McConaughey, Collette (Anne Hathaway), Doyle (Wes Bentley), and Romily (David Gyasi) to check it out. Their mission is constrained by fuel, oxygen, and communications lag. In many ways, this is a very realistic science fiction film, if you can get past the hand waving of the quantum physics aspect. But honestly, you pretty much have to fandango on the corpse of actual physics to justify faster than light travel, so who cares?

Meanwhile, on Earth, time and desperation stretches on. Cooper’s daughter Murphy (Jessica Chastain) eventually replaces Professor Brand, as relativity means decades for earth, while McConaughey remains tan and unaging. It’s a race against societal collapse to attempt to collate the data from the expedition into physics which supports the ability to evacuate a large population to a habitable planet.

Orson Scott Card, eat your heart out: Nolan’s film, along with it’s attendant monologues and over-hammering of themes, reminds me of the science fiction of Orson Scott Card, at least from the era before Card degenerated completely into a homophobic Mormon crank. There may not be subtlety, but there is beauty and imagination at work. One of the strongest highlights of the film is when one of the crew gives a passionate speech about love and choosing to follow intuition instead of science. Ordinarily, such a speech would win over the cast. In this instance, though, it causes the rest of the crew to recognize the irrationality of their comrade, and choose instead to go for the next most logical option. Yes, the female character is the one who gives the speech. Why do you think I’m comparing Nolan to Orson Scott Card?

The Beauty of Tesseracts: Quantum physics and relativity is a great gift to science fiction, one that has rarely been utilized. Nolan’s excursion into the weird realms beyond our space is not as vibrant as that of Kubrick’s ‘Starchild’ sequence from A Space Odyssey, instead becoming another set of Escher-esque recursions, reminiscent of Inception.

Final View from the Event Horizon: This is the difference between Kubrick and Nolan: Kubrick had the confidence to let his cinematography do the speaking for him. Nolan makes sure to underline his every point with dialogue. They’re both good film-makers, but Nolan doesn’t trust the ability of the audience to deduct the plot. The result is a film that is A Space Odyssey for people who don’t like ambiguity, enigma, or mystery. I imagine sci-fi fans will eat it up, just for those reasons. In the end, Interstellar does not qualify as a ‘hard’ science fiction film, but it does a great job of pretending to be such. This is a fun, exciting ride, suggesting that Hollywood has gotten the hint from Cuaron’s Gravity: audiences do want to see reasonably intelligent and complicated science fiction films, especially when the complexities of the science are grounded by simplistic and straightforward emotional dynamics.