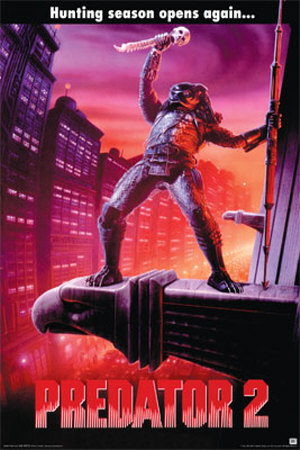 Silent. Invisible. Invincible. He’s in town with a few days to kill.

Entire Story in Fewer Words Than Are in This Fragment:

Predator interrupts a multi-way drug war; is a pussy.
Homoeroticism:
There are a few good lines, although we are denied anything like a trip to the bathhouse.  This is 1990, by which time naked women had began creeping into our action films.  Sure enough some skank is caught riding a drug kingpin’s Linus and he, not she, is punished with death.  Glover does, however, accuse his sarge of “ripping off my dick and shoving it up my ass,” in a moment of wishful thinking.

As you might know, I’m a stickler here.  With rare exceptions, I want to see them die and be sure they are dead, and this movie is loaded with borderline calls, partially because it often pusses out on gore and mayhem.  Given my tight strike zone, the tally of 24 probably doesn’t convey how violent this film really is.
Novelty Death:

That kingpin who is caught mid coitus is unfortunate enough to be hung upside down by a rival  gang of voodoo practicing Jamaicans who then cut out his heart, although we only see them slitting open his torso.  Naturally Predator decapitates, skins and hangs everything in site, but most of it is implied because this Stephen Hopkins thinks his puffy directing pants entitle him to use such esoteric  devices as “implication.”  One scene where we see the shadow of Predator removing a skull and spine from a victim reminded me of “M.”  Not really.

Among his other talents, Predator is also a walking sampler.  He rips a kid saying “do you want some candy?” and plays it as he is moving in to kill Bill Paxton who, to his credit, responds with “let’s dance.”
Was there a stupid chief?
There was a stupid everything!  A stupid sarge who answered to a stupid chief who was under the thumb of stupid Fed, Gary Busey.  Busey plays an ingenious air force scientist who leads a crew that makes themselves invisible to the infrared vision of Predator by donning suits that do not allow their body heat to escape.  They also use flashlights when executing this brilliant strategy so Predator sees the lights and kills them anyway.  In any case, 60% of all of Danny Glover’s screen time involves one superior or another yelling at him to start playing by the rules and minding his own business.

The usual drug war nonsense.  There is arguably an anti-violence message mixed in because we learn that Predator only attacks those who are armed and travels to points of conflict when visiting earth.  He even encounters this little boy who has one of those vagina guns they give kids now that’s painted bright orange and he doesn’t kill the kid for being such a little fairy.

Well, there’s some pretty cool stuff.  Even in the worst outings, Predator and his gear look awesome.  As I’ve said, there are a lot of cop outs when it comes to violence.  There’s no way the film lived up to the script.  Then there’s shit that just don’t make no sense.  What’s the point of Predator’s stupid code of honor and only attacking the armed, when he is completely impervious to most of our weapons?  It’s like taking pride in only beating women with acrylic nails or something.  In fact, Predator is generally kind of unmanly.  He spares even a well armed woman because she is pregnant.  Again, would you refrain from beating your wife or girlfriend merely because she was with  child?  Also, towards the end he is hanging off a ledge and winds up falling because he can’t do a fucking pull-up.  I think this one might have been a girl Predator.

In spite of it’s flaws, this film has some nice moments and is reasonably fun to watch.  Alien really did kill Predator, who would be just about due for a proper revival if not for being tapped out by that AVP crap.