BEST OF THE BEST

A team is not a team if you don’t give a damn about each other.

There’s a kind of inner strength you never know you have…until it’s ALL you have.

Enough pull-ups can, and do, conquer centuries of tradition.

Because the film came out in 1989 rather than 1985, there isn’t as much blatant gayness as there are subtle intimations of it. Alex Grady (Eric Roberts) is 40 years old and lives with his mother so hes likely a closet homo. We rarely see Sonny, the Italian, wearing a shirt and the training montage has as much sweat and grunting as anything youd find in Rocky III. The core of the homoeroticism is best defined by the unusual tension between Tommy and Alex that develops throughout the movie a fruity tension. Always coming to each others emotional and physical aide during the months of training prior to the tournament, their relationship culminates in a rather steamy incident during Gradys fight. After dislocating his shoulder, Grady ignores the pleas of his coach (James Earl Jones) and urges Tommy to pop it back in so he can continue the match. He screams, Pop it, Tommy! Pop it, Tommy! Pop it! Pop iiiieeeeeeaaaaaaaaah!!! as Tommy straddles the flaccid appendage and thrusts it into place with a passionate groan. Unfortunately there was no time for them to cuddle afterward, not with the tournament still on the line. Hell, I didnt even realize I had a boner until I stood up to make another drink.

Absolutely nobody dies during the film but its revealed to us, via several flashbacks, that Tommys older brother was killed by the feared captain of the Korean National Tae Kwon Doe Team in a previous tournament. The appalling lack of murder was partially assuaged with a bar fight that would make Patrick Swayze grow his mullet back.

Not so much bad as it is downright silly. Ok, its pretty god damn dreadful even without Eric Roberts shamelessly overacting at every turn. Basically, the U.S. National Karate Federation picks five of its top fighters to face off against five of Koreas finest Tae Kwon Doe masters in a full-contact tournament. Why? To prove that with a little grit and determination, America can rectify the catastrophe of the Korean War by beating the filthy little slopes at their most sacred and enduring practice. Before I go further, apparently were supposed to just bend over and accept that James Earl Fucking Jones is qualified to coach the national karate team. The guy is pushing 300 pounds for gods sake! Hed sooner explode his femur than execute anything resembling a roundhouse kick. Anyway, the Americans have three months to prepare themselves during which they take grueling jogs around the track and do dozens of crunches in between long periods of laying around complaining.

The team consists of a single father and part-time mechanic (Alex), a dumb Italian from Detroit (Sonny), a Buddhist who meditates in orange sweats and a poncho (Virgil), a bigoted redneck (Travis), and a Korean-American kid from Fresno (Tommy). Their opponents are five identical men who have done nothing but study Tae Kwon Doe together their entire lives. The most important thing to mention here is that Travis is played by Chris Penn. Yes, flabby-assed droopy-lipped Chris Penn (R.I.P.) who is somehow more unbelievable in his role than James Earl Jones. Although he pisses away any credibility the movie mightve had in terms of realistic martial artistry, Travis happens to be the most entertaining character because he embodies what real Americanism is all about laziness, cultural insensitivity, arrogance, and a red-hot love for country music.

Realizing that they have no chance against the Koreans, the Federation hires a white woman (Wade) with a degree in Eastern Philosophy to strengthen the minds of the Americans while James Earl Jones sees that their muscles are well-oiled when they jump rope. Conversely, we see the Koreans train by breaking shit, doing butterfly kicks, smashing bats across their shins, and ridge-handing tree trunks in the snow. In one of the more preposterous scenes, and there are many, Wade tells the team that in the event of a tie, the fighters will have to break a stack of concrete plates to determine a winner. This way of deciding things is referred to as, Eastern Rules. The team looks on in disbelief, utterly perplexed as if theyve never broken so much as a coffee mug in their lives. Are you kidding?! These are Americas best fighters?? I had to break wooden boards to get my fucking green belt when I was nine! This movie is retarded. On that note I should mention there is a brief training segment where Tommy is demolishing a punching bag while wearing a red leather jacket thats virtually identical to the one Michael Jackson wears in Beat It.

Travis insults Asian cuisine, or white rice, one day while the team is eating lunch, then proceeds to mock Tommys beveled eyes and his small penis. Later, he gets in Tommys face and asks if hes afraid.

Travis: I think youre scared. So what about it? You yellow?

Another one-liner worth mentioning occurs just before the massive bar brawl where Travis steals the local tough guys ladyfriend for a dance. Tough guy wants some action but Tommy steps in to prevent a fight.

Tommy: We dont want to fight. Were out of here.

Tough guy (referring to Travis): I want his balls!

Travis: Yeah I thought you were missin a pair, asshole!

Barring the whole Korean War angle, the training sequences and final tournament amount to nothing more than clumsy propaganda. The Koreans are portrayed as ruthless, inexorable machines that will stop at nothing to ensure Americas dishonor while our boys are shown as real men with real feelings who, despite their differences and concealed lust for one another, pull through to become team players. In the climactic tournament, which is hosted by Ahmad Rashad of all people, both Virgil and Sonny get their asses handed to them while Travis manages to squeeze out a draw. Take a moment and imagine Chris Penn throwing labored karate chops and back kicks and youll sleep better at night. Sadly, he comes up short in the brick-breaking contest because obviously hed never had any practice in his complete martial arts career or ever in his life. 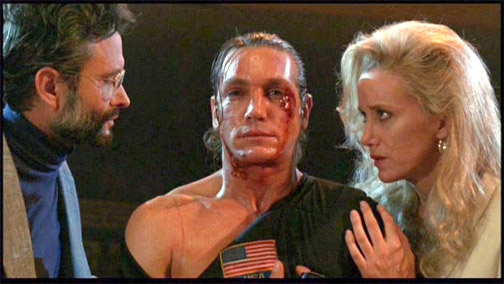 Alex, despite his gimpy shoulder, comes back triumphantly to win the fight because thats what Americans do. We win. But the real politics unfold during Tommys battle with Dae Han, the renowned and eye-patched Tae Kwon Doe guru who killed his brother, i.e. America. After a long and bloody slugfest Tommy predictably reduces Dae Han to a helpless, staggering pulp. He flashes back to his brothers death, looks Dae Han in the eye, clenches his fists, readies the vengeful deathblow, and doesnt deliver. Time expires and he loses the match, effectively losing the tournament by one point. After the Koreans are crowned champions and given their medals, Dae Han quietly limps over to Tommy, strings the medal over his neck, apologizes, and offers himself to be Tommys brother. Everybody hugs, Eric Roberts cries, and roll credits. What the fuck?

America can kill anyone and anything on this planet but we choose not to because we are merciful.