Home / Reviews / Movies / BRING ME THE HEAD OF ALFREDO GARCIA

BRING ME THE HEAD OF ALFREDO GARCIA 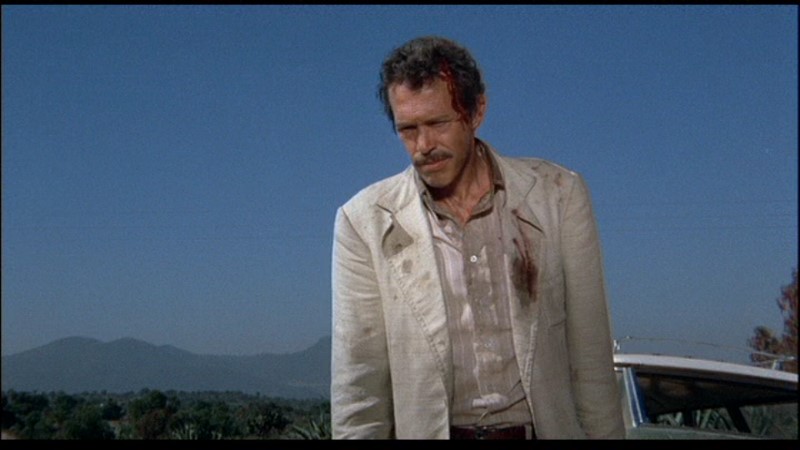 There is little question, at least for me, that Bring Me the Head of Alfredo Garcia is Sam Peckinpah’s most twisted film. But I also maintain it is one of his least understood and one of his best. It is also his most autobiographical. Roundly rejected by almost all critics (the great Ebert alone seeing it for what it is, “some kind of bizarre masterpiece”) as pure vulgarity, perversion and violence (so?), this much maligned gem should be doing laps in your DVD player shortly after you finish reading this here review, whether or not you’ve already seen it. Like many great films, Alfredo Garcia is at heart a struggle against formalism, that actually vile and actually disgusting process whereby all of us are forced to behave in ways we simply don’t want to. Nasty stuff, to be sure. The end result, according to Peckinpah? Death, and lots of it.

Warren Oates doesn’t star as much as he oozes in this truly post-modern western. Oates is Bennie, a broke-down American piano player of the lowest order who spends his time split between a nightly gig at a grungy Mexico City whorehouse and trying to figure out how to love Elita (the stunning Isela Vega), a singer/hooker who’s premiere amore is none other than Alfredo Garcia. Before we meet these two, we meet El Jefe and his pregnant daughter. El Jefe is a seriously wealthy landowner, who after literally forcing the name of the father out of his daughter, ponies up $1,000,000 to the man that will bring him the head of Alfredo Garcia. What is so fantastic about this, the opening scene in the film, is that you the viewer are convinced you are watching something set in 1890. And then Boom! As soon as the reward is offered cars explode out of El Jefe’s gates and men board airplanes. It is obviously taking place in those damn seventies. This was no doubt Pechinpaw’s way of explaining just how vile and fucked the modern world is; it is indistinguishable from from 19th century Mexico. That’s bad. Enter Dobbs and Sappensly, two seriously swinging dudes who happen to have a real hard on for the money, if not each other. In fact, at Bennie’s whorehouse, Sappensly elbows a woman in the face so hard she goes unconscious. Her crime? Trying to touch his dick.

Dobbs and Sappensly explain to Bennie that they are looking for Alfredo Garcia, an old friend of theirs, and they would very much appreciate it if he could help them out. Bennie feigns ignorance, but it is damn obvious that he knows exactly whom they are talking about. Shortly, Bennie confronts Elita about the whereabouts of Alfredo Garcia since she just spent three days sequestered with him. She explains that Alfredo died. Bennie then goes to see Dobbs and Sappensly at their hotel. Now, the penthouse the two are in, along with a bunch of other guys, is actually the most amazing part of the film. Looking much more like something out of Kubrick’s mind than Peckinpah’s, the men sit around with their pants off getting their feet washed by various women. There’s two boss guys sitting at desks in the very back smoking pipes and tending to you can only guess what sort of business. Non-legal, to be sure. Plus, one of the walls is this gorgeous orange color and pure, actual seventies camp. Quite unlike more modern faker attempts. Bennie tells all present that he can get Alfredo Garcia’s head for them, no problem. They offer him $1,000. He demands $10,000. They say yes.

In Bennie’s mind, he’s just won the lottery. Alfredo’s head is his ticket to Easy Street. All he has to do is dig it up and cut it off (with a four foot machete that he purchases, I might add). In another truly great scene, after Elita has drunkenly seduced him, Bennie announces that they are taking a little road trip. Elita, too hungover and beautiful to move, then gets her ass snapped by Bennie’s rolled up towel before she reluctantly and literally tumbles out of bed. The two are off and we are treated to one of the most natural, beautiful and heartfelt scenes in all of cinema (read what Ebert quoted Kristofferson saying in the above link). Elita and Bennie renew their love for each other and after she gets over the initial shock that he’s going to cut her first love’s head off, she accepts Bennie’s plan to start life again. What really sets this scene apart is how truly desperate the two are to escape their respective stations and how powerless they are to do anything about it except fulfill the meaningless demands of some asshole rich dude. I mean, Alfredo is already dead, right? Anyhow, their desperation is universal in scope and quite moving. Suddenly, as the viewer, you are convinced that delivering the head of a dead man is the right thing to do.

Things don’t go so smoothly as they get to the tiny hamlet where Alfredo is buried. For one, they get stuck into a motel so shitty, that not only is there a urinal in the bar, but Bennie can only compare the dump to Fresno, California. Shudder. Then, they get double crossed, whacked in the head with shovels and buried alive. Elita doesn’t make it, but Bennie does. Moreover, he now seems born again. Born again as a Peckinpah killing machine! From here the movie goes from twisted to just plain fucked up. Bennie’s first order of business is to not only kill the men who killed his love, but to get Alfredo’s head back. Which he does, quite Ruthlessly I might add. In fact, he kills one of the guys outright and only seriously wounds the other. Then, standing over the injured man, he finishes him off, declaring while squeezing the trigger, “It just feels so good!” He reclaims the head–which he now only refers to as “Al”–and shoots his way down to El Jefe’s sprawling hacienda. Killing another fourteen people along the way. At this point he’s got Al in a picnic basket and even after El Jefe hands him a million bones in a briefcase, Bennie is much more interested in keeping his new found friend (as well as continuing the killing spree). Many more people are gunned down before Bennie finally gets his, going out in an honest to goodness blaze of glory. The film ends with a close up of the smoking barrel of a gun. Ah, Peckinpah.

At root, I have a feeling that Bring Me the Head of Alfredo Garcia is Peckinpah’s “fuck you” to Hollywood. A big, blistered, head-in-a-gunnysack middle finger, if you will. Or maybe I just like to think that. On a larger scale, it is an attack–again–on formalism. Bennie’s only hope for a better life is to fulfill the arbitrary wishes of some insane rich man. He hates what he has to do, but it is all he can do to survive; to thrive. Needless to say, I highly recommend this movie for it has everything a movie can. Some of the sweetest loves scenes imaginable, blazing guns, car chases, snappy dialogue, and yes, at the end when Bennie completely snaps, the scenes with him talking to his new friend Al–a severed head in a blood-stained sack covered in flies–is simply remarkable. I mean, he talks to Al, he gives Al tequila, he makes Al take a shower, he apologizes to the fucking head when the road is bumpy and Al falls from the front seat onto the floor. And it all makes perfect sense; depraved, mad and beautiful sense. If the seventies were a high water mark for American cinema, Bring Me the Head of Alfredo Garcia exists as the buoy floating on the top. For few films that got everything so weirdly wrong, get everything so wildly right. Bravo Sam, bravo.