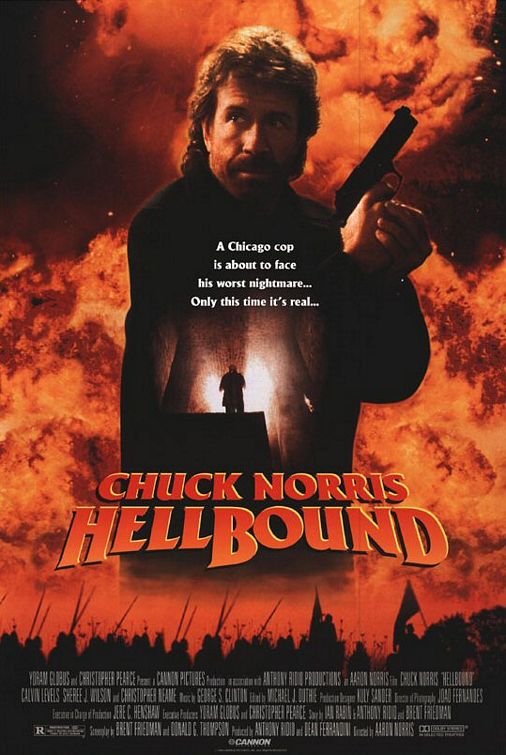 Well, it begins in the 12th century, jumps to the 50s and winds up with Chuck Norris fighting Demons in Present Day Chicago and then chasing them to Israel, so I guess the answer is no.

I made sure it was small enough that it would be difficult to read, so that I could highlight it, as it is worth more than one look. A Chicago cop faces his worst nightmare only this time its real

Could I trouble you to take a dump on the direction?

Sure! I think the director is making reference to Rashomon with an early shot of medieval soldiers taken from behind some bushes. Perhaps hed be glad that I noticed if not for the fact that I noticed with tearful, derisive laughter. Actually taking time to think about it, which I realize I shouldnt really be doing, its worse than it seems because the scenes near the beginning of Rashomon establish obfuscation and doubt, whereas the primary message of Hellhound is that Satan is bad. So the reason for using the shot is a dim hope that someone will spot the similarity, but not the pointlessness? The whole opening sequence is really very AK heavy, but its prefaced by these retarded titles. So, like, you can practically see the guys life laid out in the first 30 seconds. He watched the Star Wars movies hundreds of times, then read somewhere that Kurosawa was a primary influence on Lucus, so hes trying to be influenced by Kurosawa too. How cute! Also, the director is Chucks brother. You think Im taking this too far, I know. But look at the creative journey of Aaron Norris for yourself:

Who Produced the film?

What an odd thing to ask, unless you already knew that this was a later production from the 80s Action conservatory that was Cannon Films.

Did the film lift any one liners from Crocodile Dundee?

It sure did. Norris, upon trading punches with a baddie. Do you call that a hit? Thats a hit! That is an actual line in a movie with five credited writers.

So this is a film from Chucks Christian period?

How does it express the layers of depravity that underlay religious fundamentalism?

The most unintentionally profound scene comes when the Son of Satan emerges in Present Day Chicago. He turns up in a cheap motel with a hooker he has hired, though he is not interested in her sexually or in any other way whatsoever. She trots around the screen in some nice lingerie, she showers, she is hot. Her presence does nothing to advance the plot. Then she is righteously thrown out of the hotel window to her death, not by the agent of good (Norris) but by the agent of evil (the devil guy). Its like Jimmy Swaggart on purpose. She is immoral, but the audience is invited to indulge in her immorality, though with plausible deniability, then to see her disposed of for the crime of arousing them. Yet, the agent of her demise is also evil. Enjoy the harlot, enjoy her punishment, but none of it is on your hands. The level of sickness here is akin to the mythical snuff film. I get my rocks off. She is dead and damned, and if it all blows up, the evil producer takes the fall while I remain clean and sanctimonious. Even though I just came in my sweatpants.

Arent you reading too much into this?

You said the same thing when I made the Kurosawa observation and you were wrong then. This is a movie made by fundamentalists meant to represent their agenda. It lingers on a hot hooker who is in the movie for absolutely no reason whatsoever. And I mean, like there is not even an ostensible purpose for her being there. Then she is thrown to her death by the spawn of Satan. Find some other way to make that all add up.

OK wiseguy, explain that over there.

Was there a stupid Chief?

Yes. The casting call must have been for women who look like Jewish, lesbian college professors. They put her in a police uniform several sizes too big for her. All coincidence.

Exchange that Chuck actually has with his black sidekick:

Chuck: Do you know where the University is?

Black Sidekick: I dont know, and I dont give a shit.

Not the kind of thing Id normally chime in on.  However. 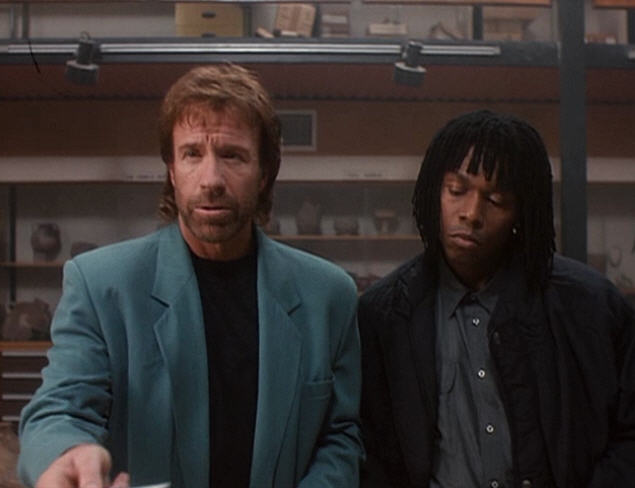 Chuck delivers a nice fatal backbreaker in silhouette. Otherwise, its pretty slim pickings. The son of Satan does throw a priest from a train, but its done in a lame, cut-away fashion because they blew their whole budget on Kurosawa allusions during the opening five minutes.

I mean I was too drunk to really do a proper corpse count, but I wasnt bored with the film. This is mostly due to the fact that it is unbelievably bad, but in the Cannon tradition, its also put together well enough to kind of hold your attention. So its not as arduous as some of Seagals 90s Inaction, for example. The refusal to work with homosexuals hit the wardrobe and stylist departments pretty hard. Thats a pretty unconvincing beard 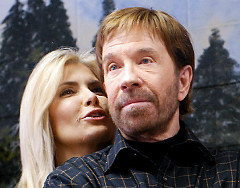