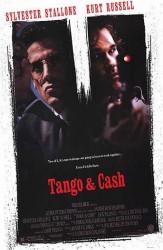 Two of L.A.’s top rival cops are going to have to work together… Even if it kills them.

Not only do Russell and Stallone shower together at one point, but they look at each other’s cocks while naked. And then talk about each other’s cocks. We see both of their asses for way too long. It is really inexplicable. Take a movie like American History X, which has a bunch of nudity in a prison shower. Hell, It even has gay gang-rape. Far less gay than Tango & Cash. An entire generation of American men were left extremely confused about their sexuality as a result of Tango & Cash. I mean, Kurt Russell goes into work topless. And he’s a cop! I don’t even know what else to say…

Before I fell asleep, like three or four people had died. This movie has lots of instances where bullets do everything–like stop a semi-truck, or shoot holes into a semi-truck hauling gasoline only to reveal it is actually hauling cocaine!–but kill people. No, I didn’t rewind it when I woke up to see what I had missed. I think they killed four people at the end. So what’s that? Like seven or eight dead bodies?

Fucking terrible. Like, basically unwatchable. Seriously, McBain was actually more compelling. Let’s just take the opening scene, since it is the only scene of the movie I really remember. Honestly, I think I got a concussion from how lousy this movie was. OK, first scene. Stallone is chasing these two guys who are driving a semi-truck out in the desert. He gets warned by presumably the “stupid chief” that he is out of his jurisdiction and he had better let the highway patrol handle it. What does Stallone do? He speeds up and passes the truck, stops in the middle of the highway, gets out of his car, aims his .38 and begins firing at the semi. Now, he doesn’t kill the driver after shooting through the windshield at least twice, but the truck stops so hard (ten feet from Stallone) that both bad guys fly out and land at Stallone’s feet. Sly then of course says, “Glad you could drop in.” He then pulls out handcuffs and asks, “Do you like Jewelry?”

Then, the highway patrol shows up and they call him Rambo. To which Stallone responds, “Rambo’s a pussy.” Oh, Stallone’s character, Tango, is supposed to be the smart, literate one of the two. Honestly, watching Stallone try and act intelligent filled me with anguish. Then, after the “stupid highway patrol” can’t find anything but gasoline in the tanker truck, Stallone, like I said, just hauls off and shoots the tanker. Only instead of exploding, a bunch of coke comes pouring out. I know I talked about this two paragraphs ago, but Christ! That was the dumbest thing I have ever watched. There is a great scene in the otherwise totally forgettable Showtime where Shatner is showing Murphy how to be a TV cop. He cuts into a bag of “coke” with a knife and then rubs some on his gums. While Murphy is nodding admiringly, De Niro says, “How do you know that’s not cyanide?” Exactly. So, how about making sure it is cocaine and not, oh I don’t know, gasoline, before you fucking shoot it? Whatever, man…

Now, you would think that would be enough dumb-assedness for one scene, but, right after all the cops start tasting the coke that is pouring out of the side of the tanker, THE BAD GUY DRIVES BY IN A LIMO!!! They are out in the middle of the desert, and the bad guy and his three main henchmen all happen to be in a limousine? Get the fuck out. Seriously, fucking leave. Did adults work on this movie?

The insane part is that Tango & Cash goes downhill from there. I could spend thirty more pages detailing it, but I don’t get paid for this shit.

“I’m going to put brown sugar in your ass.”
That of course is one man talking to another man.

Russell refuses to believe that a Chinese guy who tried to kill him doesn’t speak any English. How he comes to this conclusion is never made clear. Anyhow, he goes into the room where the prisoner is being held, throws the chinese guy on the floor and puts a folding chair across the dude’s neck, and then straddles the chair, choking the prisoner until he starts speaking English. So, torturing prisoners is cool, as long it is one of them lying chinks? I’m pretty sure that right there is message. The legal system is corrupt to the point where Tango and Cash wind up getting convicted for murdering an FBI agent.

I’m going to take a second on this point. Tango and Cash both walk into a room at the same time and find a dead FBI agent who has been shot. Five seconds later, maybe six seconds, a bunch of other FBI guys walk in and arrest Tango and Cash for the murdering the FBI guy. I believe they are all inside a big warehouse at the time. On like the fourth or fifth floor. In the middle of the night. Don’t bullets make loud fucking bangs? Who did Tango and Cash have for a lawyer? Lionel Hutz? Oh, why am I even bothering? From there the movie becomes like gay Kafka.

More like Novelty Life. At one point, inside the prison, the head bad guy (Jack Palance by the way) and about thirty bad guys watch as Brian “I’ll Tell You About My Mother” James (he played like five different bad guys on Knight Rider) has the two dipshits tied up. They are then lowered one by one into vats of water. Oh, the water has 110 volts of electricity flowing through it. And they survive! And they get dipped like many, many times! It wouldn’t have been any more stupid if he had tortured them with a guillotine. Sigh…

Was There A “Stupid Chief?”

You bet your ass there was. Your sweet, oily, rock-solid ass.

What I am going to say at this point is certainly open to debate and probably requires much research and a better forum, but here goes; Tango & Cash is responsible for the “No Fear” movement, as well as the “Bad Boy Club” phenomenon that swept the US during the 90s. Maybe not solely, but I seem to remember all the dumb-ass jocks at my high school, the kind of guys who would wear border patrol hats in Southern California because they thought racism and bigotry were fucking funny and cool, suddenly all started writing “FUBAR” on the back of their jacked-up Chevys just after this movie was released. Of course, these same jocks never understood that the “Bad Boy Club” was like the gayest thing, like, ever. Or did they…?

Oh yeah, “FUBAR,” a legitimate piece of lingo emanating from WWII meaning, “Fucked Up Beyond All Recognition” is one of the two big running jokes in Tango & Cash. The other joke is Russell’s constant assertion that he is going to sleep with Stallone’s sister. Cause he’s gay and he would never do that. That’s why it was funny. Get it?