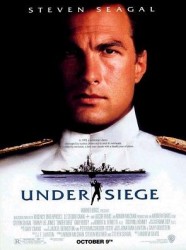 OK. I have to go into stupid chief mode here:

Chief Schulte: Seagal!! Get in here!

Chief Schulte: You mind telling me what the hell you think you’re doing?

Seagal: Why, what do you mean?

Chief Schulte: You know damn well what I mean! You made an 80s Action movie about the fucking Navy with barely any homoeroticism?

Seagal: I was never much into seamen, Chief.

Chief Schulte: You’re a good action star Seagal, but you’re a loose cannon. What you’ve done here is a total breach of 80s Action protocol. Why, in the fuck, when a playboy bunny arrives on the ship, does the camera deliberately pan down to a lingering shot of her ass? And instead of having the girl killed, you wind up… kissing her?

Seagal: Well, Gary Busy did show up in drag for no apparent reason.

Chief Schulte: That’s the only thing keeping you on the force son. But he was the villain. Are you saying there’s something wrong with repressed homosexuality manifesting itself as fascistic bullying? That’s what made our country great!

Chief Schulte: Look Seagal, just tell me you wanted to see the guy with lipstick, so I have something to put in my report to Commander Cale. Otherwise, he’s gonna have your balls.

Seagal: Maybe he should just join the Navy.

Chief Schulte: Damnit Seagal! Why do I put up with you?

Seagal: Because I get results.

A robust 52, mixed in with many a beating and a few maimings, my favorite of which involved a table saw. My only real complaint is the absence of Seagal’s trademark bone snaps.

Seagal is the unquestioned master of the novelty death. I was debating between the I-beam impalement and the bare-handed larynx removal when Seagal got to the head bad guy, Tommy Lee Jones.

One of the many innovations of 80s Action is the corpse kill. You kill a guy, then kill his corpse. The bad guy’ kills the Captain of the ship by shooting him squarely in the head, then shooting his corpse in the heart a few minutes later. Just for fun. Seagal’s genius is that he will pull out an entirely new method for killing the corpse. Rather than shoot you, and shoot your corpse, Seagal might snap your spine, then throw your corpse down an elevator shaft. In the case of Tommy Lee Jones, Seagal beats his man, slices him up with a knife, pushes his eyeball back into his brain (Jones is still alive at this point) then drives the knife into the top of Jones’ skull, right up to the handle. The corpse then gets thrown headfirst through a monitor and electrocuted. You know those scenes where it looks like the bad guy is dead, but then he gets back up and musters one more cheap shot? You don’t see any of those in Seagal flicks.

When the bad guys are taking over the ship, one seamen tries to fight back. The bad guys gun him down, then gun down another guy who’s just standing there. Jones bellows, “Let this be a lesson. If you resist, we will kill you and we will kill the man standing next to you.”

As this was critically praised as Seagal’s best film, I feared that Corpse Count and Novelty Deaths would be sacrificed for trivialities such as plot and/or character development. But as shown above, this is not the case! The story holds together pretty well, the acting’s pretty good, there are several genuinely funny lines of dialog, and Seagal rips out a man’s larynx with his bare hand. This is the perfect “couples” 80s Action film.

I wish Seagal had quit Hollywood at the apex of his career and run for office. He’s what the left in this country really needs: a badass who punches bullies in the nose and then pushes their eyes back into their brains (yeah, I know, he’d have to push really far) instead of forking over the lunch money, then crying about it to mamma. The political themes of Seagal’s work can be summed up by an exchange of ideas he has with villain-Busy. Seagal encourages a young soldier to occasionally question authority and think for himself. Busy says that Seagal “hates America.” Seagal blows Busy up with a shell the size of my couch.

We joke around about it, but seriously, it’s pretty striking how the militantly right wing films of this genre are uniformly super, super gay, while commie Seagal is usually Out For Pussy. The evidence is more overwhelming than I ever thought it would be.