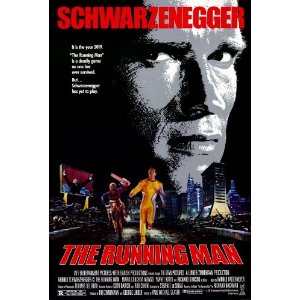 A game nobody survives. But Schwarzenegger has yet to play.

Whoa doggy. As I have indicated elsewhere, Arnold Schwarzenegger is gay. He is not a gay, he is gay. It is like when Orthodox Jews discuss Moses. Moses was not a prophet, he was prophecy. So, any film the Governator appears in, induces many, many boners. That said, The Running Man is as homoerotic as almost any film ever made. Examples littered the screen. In the first action scene, Arnold grabs a prison guard by the balls and then smiles. His One-Liner was, “Give you a lift?” Which is Austrian for, “Your cock feels sweet in my hand.” Arnold also sports a bear-beard (as does Sven) for a little while that makes him look gayer, somehow. More bear-like. Also, just before the prison riot breaks out, it was clear to me at least that the prison workshop was the direct inspiration for the classic Simpsons gay factory sequence. All that was missing was the C&C Music Factory tune. Honestly, they could have called this flim, “The Rutting Man.”

Like a few other 80s Action classics (most notably Commando), the homosexuality refuses to be confined to just the sweaty beefcake imagery and makes its way into the actual dialogue. At one point Arnold picks up some lady’s lingerie and says, “Edward?” When Killian (Richard Dawson) first sees Richards (Arnold) he proclaims, “Hello gorgeous.” Then, “Is he beautiful?” When they actually meet, Killian’s first words are “Hello cutie pie.” Followed by, “You’ve got talent, you’ve got charisma and you’ve got balls.” Killian forgot to mention Richards’ sweet, sweet rectum. Arnold’s friends are bitching about the underground and the satellite uplink. Arnold shouts, “If you guys don’t shut up, I’m going to uplink your ass–then you’ll be on the ground!” OK, fine, he actually said, “then you’ll be underground,” but his accent is so thick that we hear “on the ground.” Watch it and see. And I dare you to try and keep your pants on. The number one 80s Action chick Maria Conchita Alonso is bitching that the network lied and said that her and Arnold were boyfriend and girlfriend, to which Schwarzenegger responds, “We can straighten that out–I’ll strangle you for the home audience.”

A pretty healthy 42 human beings were shot, sliced, strangled, electrocuted and blowed up real good in The Running Man. Also, and Erich will disagree with me here, but the opening scene of the film is Arnold balking at firing into an unarmed crowd of 1500 people during a food riot. Later on we see scenes from the “Bakersfield Massacre” and learn that between 80–100 people got it. What I find odd is that most people only remember the various “Stalkers'” deaths. Sub-Zero getting choked out with the barbed wire, Buzzsaw getting his nuts sawed off, Dynamo getting killed by a fire sprinkler in his tighty-whities, Fireball (Jim Brown!) getting blown apart by a flare and then Killian getting launched through the exploding billboard. But where do all the other deaths come from? The afore mentioned prison riot/jailbreak provides about half and the ending, when the “underground” storms the TV station provides the rest. I should mention that during the jailbreak, one guard dies twice. Look for it.

The Running Man is really two movies. One is only concerned with how many One-Liners Arnold can spout off and the other about near-future fascist America. For his part, Arnold is not concerned with the all-encompassing fascism. He is in standard 80s Action mode. In other words, when he says he’ll be back, he means it. The Running Man is based on a short story by Richard Bachman (AKA Stephen King) which I have read numerous times. It is wildly different than the movie. Is the book better? Yes, but it is also extremely different. In the book, The Running Man takes place all over the US and goes on for several weeks, with average everyday folks calling the networks with tips of the contestant’s whereabouts in exchange for cash (see America’s Most Wanted). In the movie, Ben Richards is wrongfully misconstrued as the “Butcher of Bakersfield” and is supposedly given a chance to earn his freedom (or a “trial by jury,” one of the show’s great prizes) if he runs around a devestated city for three hours.

Another huge element to the plot is the existence of the “Underground” and their burning desire to get to the network’s satellite uplink so they can broadcast “the truth.” Mic Fleetwood is the leader of the Underground. The Underground is headquartered like four feet from the satellite uplink, yet they can’t find it. The Underground was just really stupid (and absent from the rather nihilistic book). Also really stupid was the fact that Arnold and his friends (one of whom was the great Yaphet Kotto, but he dies) are running around aimlessly trying not to get killed by the Stalkers. However, the friends seem more interested in finding the relays that will point them to the satellite uplink. Arnold is furious with them and keeps yelling, “This way!” But, like, where was he going? Like, why not look for the relays since you are trapped in a game zone anyway? And why would an extremely violent game show that has dudes with chainsaws, flamethrowers and a dude who can shoot electricity in high enough voltages to kill people, leave their satellite relays just lying around like that?

The dumbest parts of the film involvedmagic cameras. I call them magic, because Arnold and his friends are CONSTANTLY chattering on about the Underground and finding the satellite uplink while they are “running.” Yet somehow the cameras miss that. Of course the cameras do pickup all the witty One-Liners Arnold says to the Stalkers as he offs them. At one point, Maria Alonso finds three corpses in an abandoned locker room. Turns out they are the three “winners” from last year’s season. Fireball is in the room with her when she makes this discovery. Arnold then kills Fireball in the same room and the cameras show that, but not the corpses. Even dumber, is at the end when the Underground finally makes its pirate broadcast, they use the footage from the locker room showing the three corpses. Sloppy shit. Funnier: one part shows a big billboard ad for “Tonight’s Episode” of The Running Man. I had to freeze the picture, but the ad shows Yaphet Kotto getting sliced open by Buzzsaw a day before he got sliced open by Buzzsaw. Really, some terrible filmmaking. Though, the Jesse Ventura workout video was inspired. And way gay.

There are so many One-Liners in this movie I don’t even know what to do. Arnold exclaims, “I’m not into politics.” Richard Dawson (who was really an evil prick in this film) says, “Get me the Justice Department — Entertainment Division.” Arnold tells Killian and the home audience, “Here is Sub-Zero, now Plain-Zero!” This exchange after Arnold puts a chainsaw through a man’s balls, “What happened to Buzzsaw” “He had to split.” Right before Arnold kills Jim Brown with a flare, the former asks, “Need a light?” And how could I leave out bodyguard Sven saying, “I’ve got to score some steroids,” which he managed to pronouce, “I’be gotch tuh scow shum steroids.” And how could we forget Arnold yelling at Dynamo, “Hey Christmas Tree! Hey Light Bulb!” The list goes on and on, however, I feel the best One-Liner came not from Arnold, but from my man Yaphet Kotto, “I don’t want to be the only asshole in heaven.”

Easy one. Arnold to Killian: “I live to see you eat that contract. But I hope your leave room for my fist. Cause I’m going to ram it into your stomach and break your spine!” Say it really loud while doing your best Arnold impersonation. Comedy gold.

Dynamo, mid-rape, in his underoos. I mean… come on!

This is maybe the only notable thing about The Running Man. It takes a harsh line against big business and the military, both of which seem only to be populated with murdering liars. That’s not 80s Action! That’s some hippy-bullshit. Of course at one point Arnold does tell Yaphet Kotto to “stop trying to teach the Constitution to the street punks.” But in actuality, The Running Man was pretty Verhoven-esq in it’s message. Using some on-the-nose satire, it delivered little zingers like telling people it is good to “turn in a family member” (something that Dr. Laura exhorts her callers to do often). I’m sure Arnold got scolded by his Republican friends for this one.

No. But there was a jet pack.

Since Arnold was forced to wear a yellow jumpsuit for most of the film, they had to double stack the beginning with gratuitous shots of his biceps and chest. Sixth-grade memories, especially regarding what is “rad,” rarely stand the test of time. Maria Conchita Alonso literally disintegrated during Clinton’s inauguration. Dweezil Zappa: bad actor.