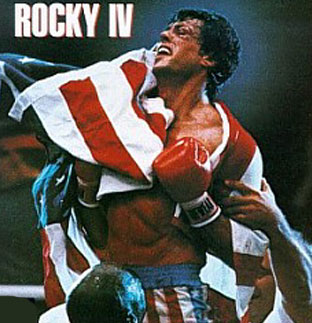 No matter how short he is, Rocky can’t lose.

Very high. Watch a recent Lenox Lewis bout. Then watch Rocky IV. The big difference you’ll notice is that while Lewis actually boxes, Sly, Carl Weathers and Dolph Lungren are much more concerned with waxing their chests and oiling their seriously ripped torsos than they are with technique. It’s off-putting, actually; they look varnished. Plus, in one of the endless montages that make up the 4th Rocky, we get treated to a scene from Rocky III where Carl Weathers is wearing a half-shirt and short shorts and running down the beach. Next to Rocky. They’re both smiling. My girlfriend was convinced they were going to fall into the surf and start making out. For some reason, we see this scene three times. And the two of them are always hugging and wearing white sweaters and stuff. Furthermore, although husband and wife, Ludmilla (Brigitte Nielson) and Ivan Drago (Lundgren) look like brothers. Brothers who like to fuck each other. And finally, Dolph is just so dreamy…

Only one death. But if one of the aspects that make 80s Action so satisfying is the exaggeration of violence, then Rocky IV is a champ. Stay with me.

Ivan Drago (Lundgren) beats Apollo Creed to death twenty seconds into the second round. Then, the Soviets have Drago hooked up to this punching strength meter thingy. My girlfriend and I were watching Shark Week and we learned that the pressure exerted by the jaws of a great white is in the neighborhood of six hundred pounds per square inch. Ivan Drago punches at two thousand, one hundred fifty pounds per square inch. Get it?

Most ridiculous and exagerated of all, he Grand Finale/Show Down/Cold War fight features fourteen minutes of straight punches to the heads of both Rocky and Ivan, before they get to the twelfth round where Stallone beats a man both genetically (typical Soviet superman) and physically (roids) superior to him [Ed Note: Better actor, too], then gets an ovation from none other than Mikael Gorbachev. For reals. Point is, if a real human being got struck by any one of the hundreds of blows that the two fighters mercilessly landed on each other’s skulls for thirty-six minutes straight, that person would make Mohammed Ali sound articulate. It was like watching a live-action cartoon of two beefy, sweaty, greasy gay men beating each other.

Tremendously bad. I wasn’t prepared for how lousy and frankly dull Rocky IV is. When I was ten years old, I’m sure I thought this shit was dope, but I was probably too dumb back then to realize that the robot/lover Rocky buys Paulie is retarded. Also, almost nothing fucking happens in this movie. Like three things. Creed dies, then we get treated to the worst music created during the 1980s (and that is saying a lot), while endless montages of the previous three Rockys, as well as flashbacks from Part IV (remember that we’re forty minutes in at this point!) play over and over and over again. In the end, Rocky defeats Ivan Drago just because Americans are winners and commies suck. He even manages to bring glasnost to the masses. The End. Oh, and if by miracle of miracles there were no saccharine-sweet montages or hyperbolic fights to endure, we got to watch constant sermonizing by Rocky about the importance of loyalty, the burdens of friendship, and the steadfast, albeit dopey, nature of the boxer’s “warrior” mentality. Add it all up and you have a movie worse than Rambo. Shudder…

Drago, after mortally wounding Apollo: “If he dies, he dies.”

If we could have just shown those silly Soviets an inarticulate Italian stereotype speaking from the heart back in the late 40s, all this Cold War nonsense could have been avoided.

No. But many were prevented, thanks to Rocky.

That making promises to your friends is good, even if they die as a result, because then you get to defeat communism. And anabolic steroids. And height deficiencies. And speech impediments. And your nagging, naysayer wife. Etc.