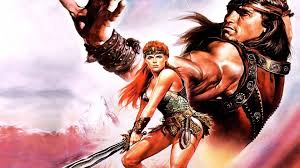 “A woman and a warrior that became a legend.”

Brigitte and Arnold kill many, many people.

Is lesbianism homoeroticism? These are the questions that will keep me from writing for legitimate (i.e. paying) publications. Anyhow, Red Sonja features more women in short skirts than any other 80s Action movie. Nielsen’s character is supposed to be some sort of man hating dyke, but through the extreme power of her maternal instinct and sword fighting capabilities, Arnold “King of the Gays” Schwartzenegger, eventually beds her in a field. Least gay movie of Arnold’s Career. He goes so far as to wear pants through the whole thing.

A very healthy 65 on screen murders. While other 80s Action flicks might have more death, please remember that there are no guns in Red Sonja. Only one crossbow death, even. Almost all of the carnage comes from the end of Nielsen’s or Arnold’s swords. Plus one guy’s main weapon is the business end of an elephant’s thigh bone.

On two separate occasions, a foe is decapitated and said head flies through the air, end over end. The penultimate bad guy gets his mortal comeuppance by getting crushed to death with a giant stone disk. The novelty element lies in the fact that he had about fifteen seconds to get out of the way of the disk, and instead just chose to lie there and get his crush on. Similar to the steamroller scene in Austin Powers. Except without all that intentional humor.

“I’m no mercenary. Nobody pays me. And if I think somebody owes me something, I take it!”

“I will tell the future in your entrails, red woman!”

Boy, it has all the trappings of a bad film, but I still like it. Mostly because of the comic relief between the prince and Falkon. Still, I should have no business liking this movie. Here’s some reasons why:

However, the movie does have some redeeming qualities. For instance, the set and overall production design is really good. Including the costumes. One guy gets beaten down with a leg of mutton. OK, so that’s it. But it does have lots of fighting. And we all love fighting, right?

Not much, except for no matter how “liberated” a modern woman is, she needs a good man.

This is lovemaking the way Joseph Goebbels intended. Serious, Arnold and Brigiite could have chosen to populate the world with Aryan super-babies. Instead, she chose Stallone, and shorter, darker, more well spoken babies. Also, this is probably the only Swcharzenegger movie besides Stay Hungry that Arnold has not starred in.