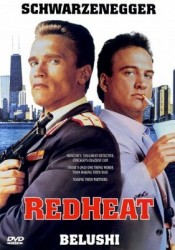 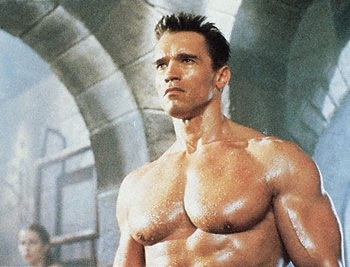 In Indian movies, sex is represented by dancing. For a variety of reasons, Bollywood considers onscreen sex taboo, much the same way we consider gay sex of any kind taboo. Especially back during the last year of Reagan’s presidency, and double especially up on the silver screen. Since writer/director Walter Hill was unable to show two hours of nonstop man-on-man ass-fucking, he decided to represent his and the cast’s secret passions with fighting. Why didn’t he choose dancing to symbolize the physical act of love like his Indian counterparts? Would you sit through Schwarzenegger and Belushi dancing for two hours?

If you watch carefully you will notice that in practically every scene, Schwarzenegger grabs hold of the person he is talking with. And not in his typical, gubernatorial manner either. With one exception, everyone Arnold touches is male. Honestly, the violence is simply too standard and unimaginative for there to be any other explanation other than flirting and foreplay. Shootouts represent the actual intercourse, and getting hit by a bullet is like a money shot. Even my girlfriend (who is being a saint and suffering through countless hours of macho-drivel while we compile this Guide) commented on the fact that throughout the entire film, Victor, the bad guy, was able to kill everyone he was shooting at with ease, but at the climax, nine feet away from Arnold – who is about three feet wide – he misses. Obviously, missing one’s target means premature ejaculation or some sort of erectile dysfunction. And you simply have to see Belushi and Schwarzenegger arguing about whether or not Arnold’s owning a pet parakeet is feminine or not to understand the mega-gayness of it all.

Red Heat opens with possibly the most fully homoerotic twenty minutes in cinematic history. Think I’m exaggerating? The first scene is in a bathhouse! Some will argue that since it was a co-ed bathhouse, the homoeroticism is absent. I say bullshit; all those nude chicks were actually hardcore steroid freaks whose breasts had dropped and whose nuts had been sucked back into the body. Present are guys lifting weights naked… Arnold is also totally nude, of course. As in we are treated to a nice ten-second shot of his ass. Needless to say that within thirty seconds he is “beating up” other guys. He even frolics in the snow with two big bears. After the nude-fighting, the “partner” actually tells Arnold that he noticed the both of them are circumcised. For reals! The bad guy Victor then shoots Arnold’s “partner” dead and Schwarzenegger is so shaken up he can’t attend the funeral. He can, of course, swear revenge. Using the “violence as a substitute for man-love” metaphor, the above means that Arnold caught his “partner” in bed with the bad guy, and now he wants a piece of that sweet, sweet ass for himself. Additionally, remember that when Arnold gets to his hotel in Chicago, he turns on some porno where a woman is clearly getting fucked. He then starts shaking his head “no.” I’m not making this up. Red Heat = gayest of all.

23 dead. Mostly by the bad guy. Arnold definitely did not get to kill enough people in this one.

Arnold and Jim just sort of loudly bumble from one scene to the next, falling deeper and deeper in love. Their blooming romance might be sweet for them and Director Hill, but man does it bore the audience. Anyhow, Red Heat absolutely sucks.

None are really good. Which is weird since Hill also wrote all of Bill Paxton’s lines in Aliens. Belushi busts a black guy and says, “You look like Marvin Hagler. I lost money on Hagler!” I suppose somehow you could misconstrue that as being funny.

A suspect shouts at Arnold, “Where’s your evidence?” Arnold of course just smashes him in the face and then throws him ten feet through the air. Then he rips the guy’s leg off. Which of course contained the evidence. And then I think the guy dies like two seconds later.

Belushi’s character is constantly making anti-Soviet cracks to Arnold. Trouble is, they all suck. The dumbest part is when Arnold explains that Red China doesn’t have a drug problem because when Mao took power, all of the drug dealers and drug addicts were lined up in Tiananmen Square and shot in the back of the head. Belushi thinks about this for a second and says, “Naw, the politicians here would never go for it.”

Again, like all 80s Action, Red Heat just rails and rails against liberal judges who are soft on crime. Belushi makes a big drug bust where the guys not only have 30 guns, a few hundred grand in cash and a small mountain of cocaine, but one of the bad dudes starts popping off shotgun rounds (he of course misses everyone in the five-foot wide room). Belsuhi is disheartened to learn that all the bad guys walked the next day, “with a handshake from the judge.”

Belushi has to explain Miranda rights to Arnold. He does this by first bribing and then planting heroin on a prisoner named “Steak” (The great Brion James). Side-note; if you don’t still think I’m wrong about Red Heat using violence as a substitute for gay sex, why is James’ character named “Steak?” Continuing; Schwarzenegger can’t stand to see Steak talking about a lawyer, so he breaks the steak’s hand. In another scene, a wannabe street thug is bothering Schwarzenegger. Arnold asks the man, “Do you know Miranda?” When the man says, “Fuck you,” Arnold knocks him unconscious. Take that, stupid law!

A Russian dressed as a nurse gets shot six times by Arnold and when he finally dies, his wig sticks to the wall as the body slides down.

Soviets were exactly like us in their hatred of bureaucracy, stupid chiefs, and meddling left-wing judges. Jim Belushi is retarded. The fact that Arnold and Belushi did not get to make out during the last scene is something that will haunt both men to their graves.