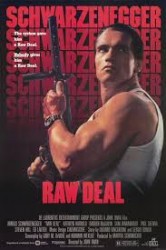 Omnipresent. Forget for a minute that Arnold actually goes into a gay bar and throws makeup on a guy’s face. Every Arnold movie is gay city. After all, the man is Adonis. However, the first twenty minutes of Raw Deal are bear season. Arnold skulking around the woods with a big red flannel tucked into his blue jeans and smoking big brown stogies. You tell me. Turns out he is a small town sheriff. You should see him in little policeman’s uniform. Rrrrr… Plus, he’s in a wife beater every chance he gets. Not only that, he never once sleeps with the leading lady. They sort of peck once, but not really. He’s got a “wife,” etc.

In perhaps my mostest favoritest scene in Raw Deal, Schwarzenegger throws some major compensation down hetero-way. While his character’s real name is Mark Kaminsky, he is impersonating a Florida gangster named Joseph P. Brenner. At one point a cop asks him what the “P.” stands for. Arnold loudly replies, “Pussy!”

Very high. The movie opens with a great and gory shootout. First we see this Tom Landry looking dude holding a rifle with a silencer so big he could shoot you in the ear and you still wouldn’t hear it. He then kills people at absurdly close range. Then one guy shoots somebody with a shotgun AND THEN pulls out an Uzi!!! At one point Arnold is in a convertible Cadillac with a bigger arsenal than he had in Commando, blasting “Satisfaction” by the Stones, speeding around a heavily guarded inner-city stone quarry (???) and killing bad dudes by the metric ton. He then of course goes into a private casino and shoots everybody. I would guess well over 50 onscreen deaths. Additionally, in one scene, he throws a craps table at a guy.

Define bad. It is much more absurd than bad. Honestly, I would wager twenty bucks that this movie was originally written for Charles Bronson and that Schwarzenegger’s star just happened to be rising. Of course, if any part of the movie began to soar too high, Arnold’s horrendous accent brings it all back down. “You rhe-memba duh caze. He muh-lested, muh-durd and meat-a-lated her!” Also worth noting is the fact that when Arnold comes home, his wife is blasting Wagner, drinking straight whisky and baking a cake that says “Shit” in white frosting.

A mob dude has a gun in the back of witness’ head. He has him facing a mirror. “You want to be a witness? Witness this.” He shoots the witness in the back of the head. The bullet then breaks the mirror.

Every single politician is corrupt. Especially the cops. Oh wait, that’s not so stupid.

Though he didn’t die, Schwarzeneggar kicked a guy’s ass with a cigar.

You don’t have to be a decent writer for Hollywood to buy your scripts. First, this is probably the only mob movie in history to have a country-western song play through the opening credits. Notable lines such as, “If you’re the best there is the wheel would have never been invented,” speak for themselves, but the characters who hear this drivel laugh. Unreal. Also, Arnold chastising Robert Davi for not owning a Jewish calendar is just beyond the realm of what is possible.