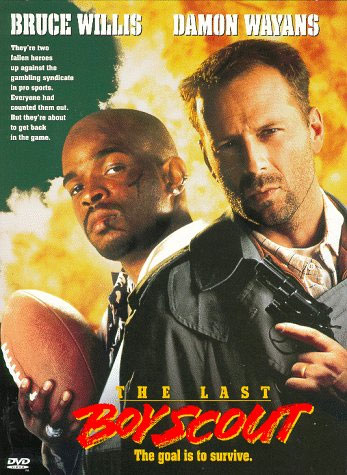 “The goal is to survive.”

Director Tony Scott and Producer Joel Silver have proven to be some of the most reactionary members of Hollywood over the past few decades, and this cock-fest is certainly no different. Misogyny, as practiced by these two titans of the industry, might not exclude the vagina altogether, but its subordinate status means that as an organ of power, the penis is more appealing, more potent, and far more deserving of screen time. Here, we don’t get the exposure we’d expect, nor do we see much of the naked male form, but the homoeroticism lies in the banter, which is shamelessly flirtatious at its most benign. The film opens with a football coach screaming at his sweaty players, “Open up the holes! Get in there like hogs! Like pigs!” And oh my how they oblige. Still, this is the Damon Wayans/Bruce Willis show, a couple of strapping gents who love each other so deeply that it’s all they can do to keep from tongue-kissing right there in the car. A sample of the dialogue:

“You ever play ball? You got a good build.” — Wayans to Willis

“Feel like I’ve been rode hard and put away wet.” — Wayans

“You don’t like women much, do you?” — Wayans to Willis

Wayans also asks Willis to hold his cock when he goes to the bathroom (Willis refuses) and when they first meet in a strip club (Willis is completely oblivious to the tits standing before him), Willis threatens to crush Damon’s nuts and stick an umbrella up his ass and open it. They bond, exchange sob stories, and risk their very lives for each other. Few are willing to go the distance for anyone they can’t later fill to the brim with bodily fluids.

The final tally of 26 was a great surprise, as I thought going in this would be more about football. Imagine my giddy delight when bodies exploded in every corner of the screen.

In many ways, it’s no worse than a dozen other Reagan/Bush-era action films that hated women and glorified death, but the finale gives this particular entry a whole new dimension. A corrupt Senator is about to be killed by a swishy assassin at a football game, but not if Willis has anything to say about it! He climbs the stadium lights to stop the murderous beast, but only after throwing a football several hundred yards to hit the Senator in the face so that he gets out of the way of the killer’s rifle. Just to ensure that things reach maximum ridiculousness, Wayans rides in on a horse, cops give chase, guns blaze, and as a capper, Willis dances a jig to celebrate his kill. How did we reach this point? The story concerns the owner of a football team and his attempt to legalize sports wagering so that billions of dollars can be made. The Senator is the last man standing in the way of such legislation, so he must be terminated.

Of course, the plan is working to perfection before Willis gets involved, so people die, including a young Halle Berry as a stripper, who has in her possession incriminating tapes that threaten to bring down the whole sinister plan. Moreover, we’re asked to accept Wayans as an ex-pro quarterback who was banned from the league for shaving points, and Willis as an ex-Secret Service agent who was drummed out of the business by that same nasty Senator. Add to all that nonsense a Stupid Chief (who actually yells, “The next time I see your ugly mug, I’m gonna put a bullet in it!”), at least two Talking Killers, and a scene where Wayans is thrown from a bridge and lands on a car, yet sustains no injuries. Fine, I think he had a bloody lip.

As usual, just bad dialogue rather than anything immediately following a kill, although Willis does say “And then some,” after being told by his victims that he’s a “real bastard.”

“I spilled my cup of warm piss.” — Willis

“Officer, there are too many bullets in this gun.” — swishy assassin, right before killing a cop

“I think I fucked a squirrel to death and don’t remember it.” — Willis

And of course, this silly exchange between Wayans and the Stupid Chief in the interrogation room:

Chief: “I could nail you for obstruction!”

Oh yes, let’s not forget Willis and his barrage of “Your momma’s so fat” jokes that came right before he slashed some dude’s throat.

Typically for the era, government is portrayed as evil and corrupt, but in a surprise turn, big business is no less wicked. Still, the film does endorse the idea that the cops (taxpayer funded) are overmatched and it’s better to leave crime fighting to the private sector (bounty hunters, P.I.’s, and the like). Other than that, the movie is somewhat apolitical, unless of course you believe it is a strong political statement to demonize and objectify women, highlighting their presence only if they are sucking cock or cooking breakfast.

One of the best, I’ll admit. A drug-crazed football star brings a gun onto the field and murders four players during his run for the end zone! After scoring the touchdown, he screams “Ain’t life a bitch?” and puts a bullet in his brain. Yeah, and it’s raining buckets at the time. There’s also the dude who is pinned between two speeding cars before receiving a “just-in-case” bullet from Willis. Then, to wrap it up in style, there’s the car that flies from the roof of a house, lands upside-down in a pool, and suddenly explodes. And of course, I’m always a pleased little boy when I get my standard “man on fire” sequence.

The line “Fuck you, Sarah…You’re a lying bitch and if the cops weren’t here, I’d split your face,” is, for an 80s Action Hero, a declaration of love.