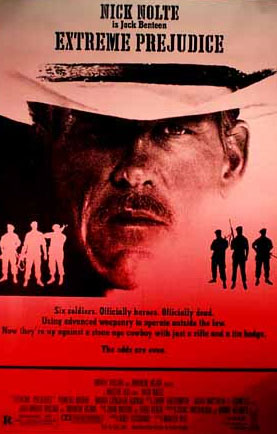 Not too high. I mean, of course, all the characters want to badly fuck each other, and they are all men, but it is not overt. No one takes his shirt off or anything. There are three naked women in the movie, but none of the men ever bother to have sex with them. One guy holds a machine gun on a naked woman. Plus, Nick Nolte, who is playing a tough as nails Texas Ranger, has a pink bathroom.

We counted 46 on screen deaths, which considering the massive amount of gunplay at the climax of the film, is way too low. Plus, there was lots of stuff where a guy fires 15 shots from a sub-machine gun into another guy’s chest at point blank range, and the victim only has three squibs, I mean wounds, to show for it. The count was low, especially considering that the movie Milius did before this one, Red Dawn, is in the Guinness Book of World Records for having the highest Corpse Count. [Ed Note: China gets nuked.]

3. This includes a rabbit turned into a bomb, a rat getting knifed, and the bad guy crushing a scorpion to death in his bare, evil hand.

Not too terrible. Rip Torn, who plays sort of a southern-fried Lao Tzu and Nolte’s father figure, gets killed off too early (now it’s personal), but not before quoting Woody Allen – “Only thing worse than a politician is a child molester.” There is this subplot where the “government” is robbing banks and killing people in broad daylight for some top secret but really patriotic reason. I feel that Milius just needed more of a military presence, so he concocted this totally unnecessary side story about a bunch of undead green berets who go on secret missions while acting like buffoons. Of course, it turns out that their leader has “turned.” He’s worked for the government for too long, etc. So now he’s running drugs.

The para-military crap does provide for the best comedy in the movie. In order to rob a bank, the pseudo bad guys blow up a barn on the other side of town. Of course, rather than just blowing it up, they have to drive a semi-truck laden with explosives into it. Just to convince any armadillos who happened to be lurking about. Then the phones at the police station get cut. The idiot deputy is like, “Gee, Sheriff, there was a big-ole explosion on the other side of town from the bank. I sent everyone over there. Why are these damn phones suddenly not working?” Anyhow, the faux-military dudes rob the bank and a black guy and a Mexican get killed.

At one point Nolte and Michael Ironsides are discussing how tough the latter’s soldiers are. He says of Clancy Brown, “Next thing you know he’s drinking orange juice with a fresh pile of ears.”

After shooting some random guy in the head point blank, the bad guys says, “I liked him, too.”

Stopping college kids from getting stoned and snorting lines is worth the deaths of 46 people and three animals. Somehow, it is all noble and justified.

Nothing is too novel, though seeing Nolte kill half-a-dozen guys with a pump action Winchester was mighty refreshing.

Friendship means nothing to the War on Drugs. Also, Tarantino’s coming along and destroying movies like this was as needed as Nirvana killing off Motley Crue.