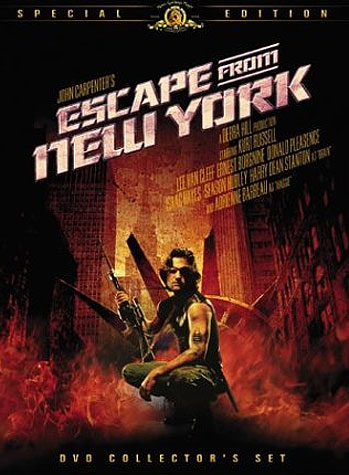 “1997. New York city is now a maximum security prison. Breaking out is impossible. Breaking in is insane.”

You really don’t want to fuck with Snake Plissken.

Negligible. Aside from the revealing tank top Plissken sports for half the movie, there is really (sadly) nothing homoerotic about it. Reaching here, he does say to Lee Van Cleef, “Call me Snake.” Er, not so good… Um, Oh! OK, as Snake is flying into New York Van Cleef asks him what he’s doing. Snake replies tersely, “Playing with myself. I’m going in.” Admittedly that’s more weird than gay. 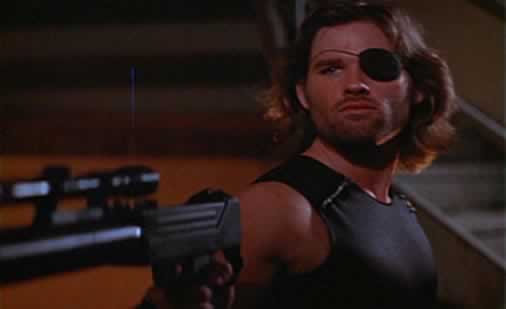 A respectable twenty-five people are mostly shot to death during the course of the film. One woman (Adrienne Barbeau) is run over and Ernest Borgnine gets killed by a mine. Oooh! There’s this big Wrestlemania-style fight sequence where Snake is going against this gargantuan barbarian looking dude and Snake kills him by hitting him in the back of the skull with a nail-studded baseball bat. Also, Harry Dean Stanton knifes a dude in the guts. Oh fuck! I almost forgot that Snake kills one baddie with a throwing star to the head!

With the inexplicable reversal of Snake first telling Van Cleef to call him “Snake” and then exhorting him to call him “Plissken,” nothing in the world is wrong with Escape From New York. I actually find it amazing how well this film holds up. Sure, the walkie-talkies and wrist locators are larger than most peoples’ computers nowadays, but aside from that, the production design is first rate all the way. I’ll always have a soft spot for dark utopian visions, and even if the idea of turning Manhattan into a maximum security fortress is beyond goofy, the idea that the Statue of Liberty is the Federal Police Headquarters rings very true. Russell, Dean Stanton and Isaac Hayes are all stellar in the lead roles (as is the always great Van Cleef) and Donald Pleasence is the creepiest President ever captured on film. True, Wolfowitz is creepier in Fahrenheit 911, but he’s not president. Yet. To reiterate, the sets, built well before the glossy onslaught of over rendered computer nonsense, are amazing. Rivaling (and pre-dating) even Blade Runner in their debased magnificence. Plus, the “crazies” act just like zombies, and we here at Ruthless heart zombies. Also, like, throwing stars!

Not a whole heck of a lot as director Carpenter is more of a “big picture” guy than a stickler for details but there were a few good ones. When the plan is explained to Snake by Van Cleef, Snake retorts, “I don’t give a fuck about your war. Or your president.” Which is sort of how I’ve been feeling since November. When Van Cleef implants the mini-bombs (please don’t ask) into Snake’s neck, Plissken tells him, “When I get back I’m going to kill you.” Then when Snake gets back Van Cleef asks if Snake is going to kill him now. Snake responds, “I’m too tired; maybe later.” But the best one-liner–which is really more of a monologue–belongs solely to Isaac Hayes. Right before the start of the ring-fight where Snake kills the giant with a club, Hayes warms the crowd up by exclaiming, “They sent in their best man. And when we roll down the 69th street bridge tomorrow, we’re going to have their best man leading the way. From the neck up. On the hood of my car!” Truly beautiful and truly Ruthless. Of course, Hayes gets shot 72 times in the chest by Pleasence at the end of the film, but it was still a great speech.

None at all. Quite the opposite of most 80s Action. Carpenter was one of the few directors working in the 80s who was concerned with the police state/big brother shit the Meeses of the world were busy cooking up for all of us. Even though the president must be rescued, the man is rotten to the core. A lying, sniveling and when given the opportunity, viscous dog. Some of my favorite parts of the film are when the police are just goose stepping around, looking like a bunch of SS. Ironically, the way they are dressed is how most modern SWAT units now report for duty. Of note, and slightly weird, is that the movie features not one, but two instances of an aircraft headed towards the Twin Towers.

It’s got to be the throwing star to the head, man.

Was There An Atomic Bomb Blast?

No, but part of the plot revolves around the US being at war with the Soviet Union and China and they are having some sort of arms summit. It was as important that Snake recover a cassette tape as it was that he recover the President. At the end of the film, the President is going to play the tape for the world, which will somehow change something important, but Snake switched the tapes. Instead of a political speech, we get treated to “Engulfed Cathedral” by Claude Debussy.

Kurt Russell, despite being a Republican nob, is pretty fucking fun to watch. I don’t understand why Carpenter seems to be producing more and more B-list films. The man has vision. Joe Alves, who also designed Jaws and Close Encounters of the Third Kind, rules. Adrienne Barbeau’s rack should be put into the Smithsonian.