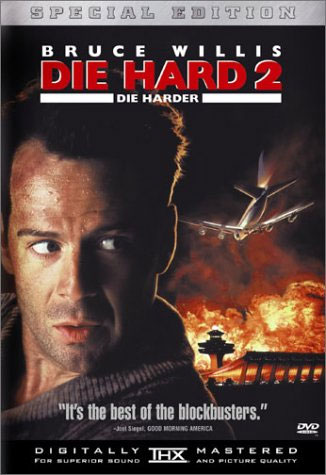 Similar to the first Die Hard in that there just isn’t very much blatantly homosexual going on. Once again, McClane seems genuinely worried about and attracted to his wife. He gets hit on by other women, one even offering to have his baby. In fact, McClane is so red blooded that when one woman does ask him to get a drink, he actually looks disappointed at the fact he is married–a sure sign of a straight man. The sequel takes place during Christmas in Washington DC, not Los Angeles. So it is too cold for Willis to strip down to his saucy little bloodstained wife-beater. So, I could have written that Die Harder is the least Homoerotic of all the 80s Action films except for one inexplicable scene. The head bad guy, Colonel Stuart (William Sadler) does his bad man karate moves totally naked. Yeah, you got it folks, he’s in his apartment fully nude and going through his moves. Is that supposed to be intimidating? Is he going to fight McClane in the buff? And of course, we only get treated to his backside for a good thirty seconds. His sweaty man ass… Actually, if you look real close you can see the bottom of his balls hanging below his butt-cheeks. I did, at least. Again, why he had to be naked, rather than say dressed in a little karate outfit, or even just a pair of jeans, makes no sense. Unless…

An interesting Corpse Count. McClane doesn’t get to kill as many people with his bare hands in this one. Don’t get me wrong, he kills loads of people, but most of them are through proxy, i.e. an exploding airplane does the killing, not the smoking barrel of his gun. So, counting the passenger plane that the terrorists force to crash, 283 people die in this movie. However, only 18 are actually shot, stabbed, bludgeoned or beaten to death. Kind of weak.

It’s not very good, Ill tell you that much. I think the biggest failure in this movie compared to the original is the bad guy. Lt. Stuart is just kind of an uptight dick. The film pretty much leaves it at that. There is no development, no real interaction between McClane and the bad guy like there was between McClane and Gruber. Also, the bad guy’s motivations are kind of foggy in this one. OK, there is some brutal South American General that is being extradited to the US and the Lieutenant is going to intercept the general. That’s the story right there. Not very interesting, I know So, I was never really engaged in the plot. Also, there is no good guy buddy for McClane this time out. Just a never ending stream of Stupid, Stupid Chiefs trying to put salt in McClane’s game.

Speaking of which, Die Hard 2 has way too many “cute” characters. From the insane lady who tases her little dog, to the wise-cracking stewardesses, to the fat Italian beat cop who refuses to rip up McClane’s parking ticket even though McClane explains he’s a cop, too, for the LAPD. “Oh yeah,” the pasta-tute retorts, “I was in LA once. Hated it.” Especailly too cute was the crazy hermit janitor, who apparently lives in the steam tunnels beneath the airport and listens to Hawaiian music and is just so crazy! Also, there is just some saccharine crap at the end… “We can use the fire trail to land (McClane just blew up the bad guy’s plane and there is a straight line of fire visible to pilots)! If they did it, we can do it.” Please. “We can do it,” should only be used in conjunction with female WW2 factory worker t-shirts. It is stupid whenever Rob Schneider says it in a Sandler film, and even more so, here, when everybody is all smiles even though about 300 people are dead.

None that really jump out. The best one is probably, “What sets off the metal detectors first? The lead in your ass or the shit in your brain?” But that is just weak when compared to the one-liner stars of the 80s Action Canon. And there are some really awful ones, too, that I guess are supposed to be funny. Here’s one, “Yeah, and I’m fresh out of chlorine.” So, for fun, try and figure out what the preceding line of dialogue was.

You know it. This is maybe the only category where Die Harder really excels. First of all, Detective Sipowicz (Dennis Franz) is the head of airport police and at one point he is telling Fred Thompson (yep, the actor turned US Senator who voted anti-union but still payed his SAG fees) that he wants to kick all the press out of the airport, but if he tries that then they would bring up the First Amendment and the ACLU would get involved. Calling Thompson a sympathetic ear is an understatement. At another point, one of the bad guys refers to a reporter as a “pinko commie stooge.” Another reporter, who is admittedly an arrogant asshole, gets tased for and while exercising his First Amendment rights.

While it is never explicitly sanctioned by the film, the General who is at the focal point of the plot is the “first victory in the War on Drugs.” Of course the military sees the ousting of a right wing murderer as a “threat to our way of life,” cause I guess the General is hard on the communists or something. And true, while McClane does everything in his power to stop Lt. Stuart before eventually killing him, the General, all of Stuart’s men and John Amos, he does so not because he hates Ollie North style fascism on American soil; all McClane wants is his wife back. Snore. Also, I don’t think there has ever been a stupider more interfering chief than Sipowicz. He tries to take McClane’s badge and gun at least three times, and is constantly chastising him for thinking independently.

Two good ones. At one point, John Amos gets sucked through the engine of a 747. That was pretty good. The best one though, was when McClane stabbed a bad guy through the eye into the brain with an icicle.

No. But two airplanes got blowed the fuck to pieces. One was piloted by Colm Meaney.

Man, are Stupid Chief’s stupid. Like, this is a plague or something. Also, anything related to the government, like the army let’s say, is not to be trusted.