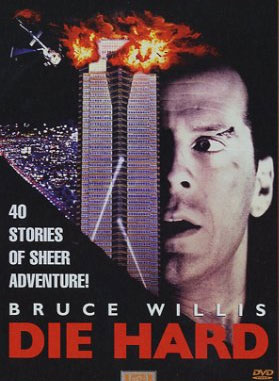 Not so much. Sure, Willis does conveniently spend most of the movie in a wife-beater before removing it for the finale, but that’s really about it. I mean, McClane is estranged from his wife and seems upset about it. And, even after he looks at her ridiculous 80s hairdo, he is still attracted to her and fights for her. Plus he is constantly looking at other women. Lots of the bad guys have long flowing hair, and they are German… I’m reaching here. Powell does tell Willis that he “still loves him,” but you can’t even really call that anything unless you are 12-years-old. Rambo and Schwarzenegger both get mentioned by name, so maybe Willis’s McClane character wants to be gay, but he script won’t let him. In summary, not much homoeroticism.

Even though by 80s Action standards the Corpse Count is low, director McTiernan makes each death count. The first one, and probably my favorite is when Willis fights, and eventually breaks the neck of, the penultimate bad guy’s brother. First of all the bad guy is this tall Blond tennis pro looking dude who is wearing a full sweat suit. He taunts Willis that since the latter’s a cop he won’t hurt him. Willis of course says, “That’s what my captain keeps telling me,” and then starts beating the man. Turns out the man is pretty strong, so they fight and fight until they burst through a door, roll down some stairs and then the bad guy’s neck snaps. So, Willis then straps the guy into a chair, puts a Santa Claus hat on him and writes, “Now I have a machine gun. Ho Ho Ho,” on the dead man’s chest with the dead man’s blood before sending the corpse down the elevator. If that is not shear homicidal mania, I don’t know what is. All in all, between 15-20 people get killed. But this murder spree takes two full hours. Good stuff.

Die Hard is not bad. I like it. Granted, I have probably seen it three dozen times. The star of the show is Alan Rickman as the devilish Hans Gruber. I like Hans because he is so totally cynical you can’t imagine he cares enough about anything to, well, care. But, he takes great pride in being, “an exceptional thief!” Plus, he’s funny. Like when he and his goons are making bullshit terrorist demands and he wants the nine members of the “Asian Dawn” released from a prison in Sri Lanka, his number two guy looks at him confused and mouths back, “Asian Dawn?” Gruber puts his hand over the walkie-talkie and says, “I read about them in Time Magazine.” He also tells the head of the Nakitomi Corporation that they both have the same tailor as Arafat.

I’ll admit that as I age the tough guy bravado exuded by McClane, the “everyman ass-kicker,” wears thinner and thinner. Also, some of the dialogue is pretty bad, especially considering that Die Hard is based on a book. Stuff like, “Smoke ’em if you got ’em” and “Kick some ass” don’t actually belong in an otherwise… “highbrow” would totally be the wrong word, but at times Die Hard is an intelligent film (I mean, hey the bad guys are stealing bearer bonds…). I just think in certain scenes, and in certain ways, it panders too much towards the idealized 80s (Reagan) everyman. Still, when the bullets are flying and the glass is breaking, few films are this much fun.

It can only be, “Yippee-ki-yay, motherfucker.” Now granted, there are some very good one-liners scattered throughout Die Hard. Like when McClane expresses shock that the Japanese celebrate Christmas, Mr. Takagi tells him, “Hey, we’re flexible. Pearl Harbor didn’t work out so we got you with tape decks.” The rad, and actually totally fucked up part of that one-liner is that Mr. Takagi was born in the USA!!! That dude would put himself in an internment camp! Also of note is the outright fascism displayed by the two FBI agents, Johnson & Johnson (“no relation,” which is itself a pretty funny one-liner as one guy is white and the other is black.) Anyhow, after agreeing that they can live with “20-25%” loss of hostage life, this exchange takes place:

Love it! Also, a lot of Die Hard, besides killing bad guys, is McClane and Powell’s struggle in the face of inefficient government bureaucracy. Like when McClane tries to call for help, the following exchange takes place.

Supervisor: Attention, whoever you are. This channel is reserved for emergency calls only…
John McClane: No fucking shit, lady. Do I sound like I’m ordering a pizza?

There are others, especially the ones from Hans (Takagi: “You’ll just have to kill me.” Hans Gruber: “Okay.”), but really, the greatest one-liner is “Yippee-ki-yay, motherfucker.” Just before McClane utters it for the first times, Hans, that elite European scumbag with his fancy suits and classical education is taunting poor old McClane, a working stiff brownbag kind of dude with stuff like, “…who are you? Just another American who saw too many movies as a child? Another orphan of a bankrupt culture who thinks he’s John Wayne? Rambo? Marshall Dillon?” See, snooty old, funny accented Hans isn’t just a thief, he totally hates America! Couple this with the fact that California is so weird and the Stupid Chiefs are so dogmatic and bureaucratic that all mcClanecan do is pick up guns and let both barrels blaze. “Yippee-ki-yay indeed, motherfucker!”

OK, fine, “Helsinki, Sweden” was a pretty good one-liner, too.

No real contenders here except for, “A hundred million terrorists in the world and I gotta kill one with feet smaller than my sister.”

Lots of it. Maybe it is because I just finished reading What’s the Matter with Kansas and am enamored with author Thomas Frank’s idea of the “plen-T-plaint.” Essentially, the “plen-T-plaint” is the never ending rightwing bitch-fest where every single affront to the normal, traditional American way of life is taken as more proof of the liberal conspiracy (al The Turner Diaries) that is out to destroy their lives and force their daughters to sleep with blacks and Jews. Everything makes McClane morally indignant. Blondes at the airport. Rap music. Businessmen doing cocaine (in 1988… yeah right), the Japanese, rich people, women using their maiden names, Europeans, European cigarettes, the bungling FBI, the bungling LAPD–everything just infuriates him. At the party, he takes a sip of some fancy wine and immediately puts it down. McClane wants beer. 1988 being the height of Reagan’s power and the beginning of his sickening hagiography, none of this should be a surprise. Grunty blue-collar types who only cared about baseball and Bruce Springsteen were very popular.

Also, the back and forth buddy crap between McClane and Powell is just too silly. They might as well have just gone, “Partner, I’m so blue-collar.” “No way buddy, I’m more blue-collar than you.” “Nuh uh, I’m a working stiff.” “Working hard for unappreciative Stupid Chiefs gives me a stiffy.” And the righteous outrage that Powell expresses every time the Stupid Chief so much as suggests that McClane is anything but a saint, is pretty transparent, too. Whatever, Die Hard is still lots of fun.

Well, while the death itself was pretty standard, Willis does chuck a dead body out of a 32nd floor window and onto the hood of a cop car.

No. But they did blow the fuck out of the FOX Building.

With a little good old American gumption, blood and sweat, you can concur any foe, no matter how snooty or incompetent.