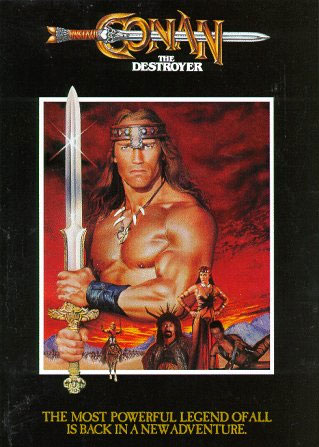 The most powerful legend of all is back in a new adventure.

Yo! This is the least gay 80s Action movie of all… I’m sure even if the movie were like a more typical example of repressed 80s Action man-on-man love and desire, the very presence of Wilt “20,000 Women” Chamberlin would tilt the balance back towards at least bi-sexual. Maybe even bi-curious. But, I’m telling you, even though Arnold walks around in his tight little underoos most of the film (it’s a comfort issue) Conan the Destroyer has almost zero homoeroticism. Sucks…

I counted 66 on screen deaths. Now, considering that the first Conan had 83 visible murders, it makes you wonder why they wouldn’t pump it up a bit more for the sequal. Not only that, but if Erich were reviewing this movie instead of me, he would only count about 40 deaths. Reason being is that Grace Jones whacks people in the head with her stick. I assume they die, since they never get up. Erich would choose to feel different. Pretty middle of the road at any rate. 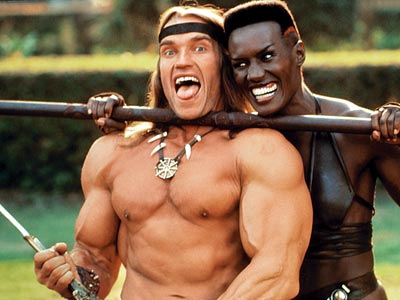 Oh, it is terrible! Wow, I watched this one and The Barbarian back to back and while the first Conan was a clunker, it had redeeming qualities. The Destroyer is just flat our boring and there is way too much comic relief going on. In the first film, Conan’s love interest partner is a fellow thief, who while not as buff as Conan, is pretty bad-ass. This time around Conan’s side-kick is a wise cracking pussy who eats jewels. Sort of the template for that mousey fuck brother character in Sommer’s wretched Mummy series. The visual effects, when it is not just a man in a stupid-looking suit, are atrocious. The whole film feels as if they had 1/5th the budget of the first film.

I just really have to talk about Wilt Chamberlin… why he is in this movie is any body’s guess. It is the only feature film the man did in his life, and while he is as good an actor as Schwazenegger (as far as I can tell) the role totally sucked! How could a man like Wilt read the script and be like, “Yes. Finally, the role I’ve been waiting for.” Wilt! Now, I do have to say that the fight scene between Wilt and Arnold is pretty damn good. Best part of the film. Only because Wilt is so quick and graceful–a counter to Arnold’s thick plod–the thirty seconds of battle are really fun. You can tell what an athlete Wilt is. But then he dies. Lame.

The Wilt related part I really have to talk about is this; the evil queen entrusts Wilt to take the royal niece on a journey and MAKE SURE SHE COMES BACK A VIRGIN!!! I mean, talk about the fox guarding the henhouse… Whoever cast Wilt for this role is FUCKING BRILLIANT. Seriously, we all know about Arnold’s rep with the ladies, and fucking Wilt had sex with more women than John Holmes and Gene Simmons combined. And this queen is sending her blond, blue-eyed 16 year old daughter off with these two guys and acutally expecting her to come back a virgin??? Holy statutory DP Batman! As funny is the fact that the first we meet the niece she has just woken up from a nightmare and WILT IS IN BED WITH HER!!! And then the queen gives the whole “she better come back unsullied” speech. Man…

I didn’t write it down exactly, but the Queen gives Wilt and Arnold a 16-year-old virgin and wants the girl back in one piece.

This movie sucked, there weren’t any.

Grace Jones plays an actual bushwoman, complete with a tail and no shoes. But then again, Wilt is three times more articulate than all the other characters. Plus I fell asleep for a huge chunk of it, so I have no idea. Don’t worry, I got woken up for the Corpse Count.

Arnold kills a mirror at one point, but the best is probably the fact that in this film he not only punches out another camel, but a horse, too.

Uh… Uh… Uh… Uh… Hmmm… Uh… Oh, I got it! Computer graphics are not the worst thing in the world.