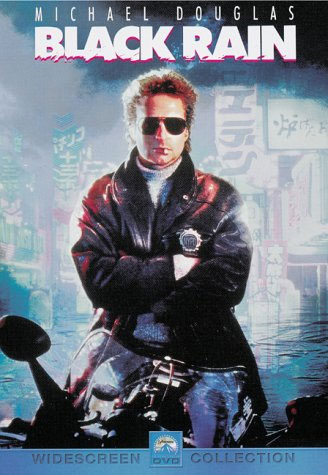 An American Cop in Japan. Their country. Their laws. Their game. His rules.

Almost nil. There’s one point where Andy Garcia (he’s so sexy) is drunk and staring at another man (Masahiro) and he loosens his tie and takes it off. But then he gives it to Masahiro and that really does seem to be more of a male bonding thing than an outright come on. Michael Douglas is the main dude, and he not only has a living wife (albeit ex), but he is very attracted to a blond woman with massive bosoms (Kate Capshaw). He even kisses her at the end, and looks happy about it. Douglas does seem upset when Garcia dies right in front of him, but hey, they are partners. I’m really reaching on this one, but Douglas does tell Misahiro, “Sometimes you got to forget your head and grab you balls.” You tell me.

A very excellent sixteen people meet horrific demises in Black Rain. I know it is low by 80s Action standards, but director Ridley Scott makes each and everyone count. The first two deaths are particularly gruesome, as one man is stabbed through the heart and the other has his neck slit. Graphically. Andy Garcia gets beheaded, and it looks fairly realistic. Everyone else who gets shot has about four extra blood packs under their shirts. Quite satisfying violence.

Not bad in the slightest. OK, fine, Douglas is woefully miscast in a role Kurt Russell was genetically engineered to play, much of the soundtrack is flat out awful and both Douglas and Capshaw sport the stupidest haircuts I have seen in a while. For her part, Capshaw looks like Glenn Close in 102 Dalmatians and Mr. Zeta-Jones has this hardcore little mullet that seems to rise up like a spoiler on a Porsche the faster he goes on his motorcycle.

In all honesty, though, this is a fine Ridley Scott film. It had the same future-Asian-noir thing going on that Scott’s masterwork Blade Runner did. Only Black Rain is set in pre-cell phone Tokyo, not near-future Los Angeles. Everything was neon and dirty. Much like John Woo’s earlier films. Much of the dialogue was over the top, but perfectly matched to the genre. Like when they get to Tokyo and Garcia is telling Douglas to, “be nice,” Douglas responds with, “I’ll be nice. I just hope they got a nip in this building that speaks fucking English.” Of course they were with Masahiro, who speaks English. What? Out and out racism is way 80s Action. Besides, Douglas and Masahiro practically suck each other off by films end. That last sentence probably should have gone above.

Also, all the cop-buddy movie clichés are present;

Still though, Black Rain was fun and the bad guy really was a psycho little fucker who much preferred knives and torture to plain gun-killing. For some reason Mike from Hobart has been riding my ass hard to do a review of this film. I’m not sure why, since it is really not all that special in terms of true 80s Action. I mean, Commando, hello?

The best One-Liner is when Michael Douglas first realizes the Japanese Chief is Stupid — “I usually get kissed before I get fucked.”

The cops pull a hundred dollar bill out of a dead Yakuza’s mouth and Andy Garcia barks, “Maybe he’s got two fives for a ten.”

Everyone dies in a pretty funny way in this film, but the best is Andy Garcia getting his head lopped off by a guy on a motorcycle. In slow motion. I mean, come on!

Besides it seeming OK to constantly assault suspects, Black Rain featured an awful lot of 80s style stereotyping of the Japanese. They are all obsessed with sword fighting, karaoke and bowing. Lots of fucking bowing. At one point Masahiro berates Douglas that all America is good for is movies and music. They (the Japanese) build the machines. They build the future. To which Douglas answers that even if a Japanese dude had a good idea, “He’d be so uptight he couldn’t pull it out of his ass!” I guess that should have gone above, too. Anyhow, we all know how flawed the above thinking is. Japan leads the world in stuffing schoolgirls’ panties into vending machines and we lead in school shootings and obesity.

No. But one of the Yakuza bosses explains to Douglas that he is counterfeiting $100 bills because of the “black rain” caused by the fire bombing of Tokyo.

Cops are right about everything. Especially good old American cops. Japanese cops, while not nearly as brave or as daring, can be taught to break every rule and police protocol. When all else fails, trust in your mullet. I really want to go to Japan.