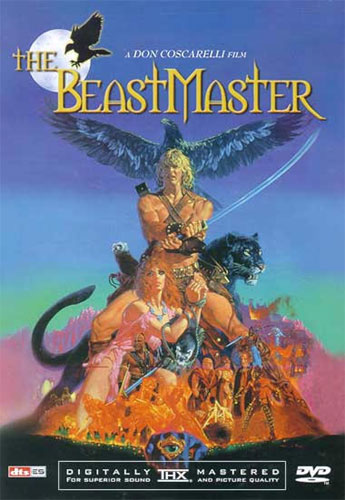 The courage of an eagle, the strength of a panther and the power of a God.

OK, so there is this 6+ minute sequence where Marc Singer is wearing nothing but his leather underoos, running around on top of rocks, flexing and swinging a big stick. What the fuck is that? Honestly, he is by his fucking self, nearly naked and, I mean… Isn’t that like gay softcore? Honestly, nothing at all happens. He’s just undressed and the camera swirls around him all dream-like. Plus he’s wearing a purse half the time and he has two pet ferrets–cause they couldn’t figure out how to train gerbils. Oh, plus he’s got a tiger (that is spray painted black for soem reason). I mean grown men running around with tigers? Siegfried, where’s Roy? And then like John Amos shows up out of the blue with an eleven year old boy. And they shake hands by grabbing each other’s bicep. And at the end Beastmaster is wearing a tiara. Although the most disturbing part is really when the Beastmaster’s stepfather and he are out alone in the woods and the old man says, “This must never be known.” 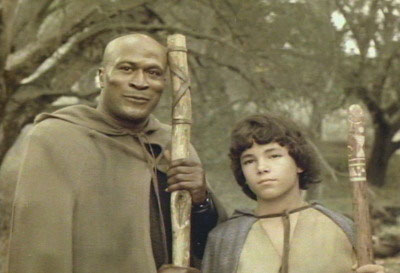 The Corpse Count is simply ridiculous. Using the Erich Schulte Method I counted 165 on screen deaths. In truth, I would say maybe 250 people died, espcially when the moat made out of tar exploded. Plus 10 animals died.

Pretty terrible. Featuring perhaps the worst makeup in movie history, The Beastmaster is just all camp. I mean, Rip Torn looks like he was going to be Spock and decided to do his own makeup. Marc Singer is so obviously just a beach bum from Zuma that you can’t take him seriously in any sort of D&D roles. I just kept waiting for him to light a joint and ask for a ahi taco. The story is standard — think Conan, which is what the team who put this thing together obviously were thinking. The acting is just above piss poor. I remember liking this movie when I was 8. Kids are stupid.

“You’re unborn child is ours, now!”

There are these weird giant bat-wing type people that somehow Beastmaster-boy gets control of. They wrap their victims up in their big wings and liquify them until nothing but a pile of bones is left.

No, but like I said the moat exploded. The moat!

Uh… Well… Maybe if… Hmmm, OK… Let me see. Oh, I got it! It is best to leave the rocks of childhood memories unturned.