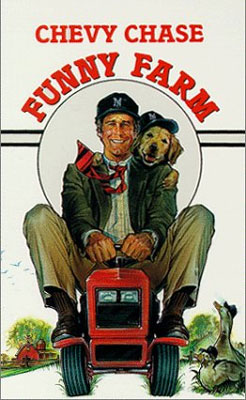 I miss the low-brow, American, comedy star vehicles of the 1980’s. I hate to sound like a codger, but why don’t they make them like this anymore? I know everyone idealizes the experiences of his youth, but I don’t think I’m being all that subjective in saying that Schneider and Sandler are not adequate replacements for Candy, Martin, Chase, Ackroyd and company. Seriously, The Wedding Singer or Trains Planes and Automobiles? The Animal or Caddy Shack? These barely constitute decisions.

Funny Farm is in many respects, a second tier film among 80’s comedies. The gags are pretty good, but sometimes a bit flubbed in the execution. For sheer number of laughs, Vacation or one of the films mentioned above is probably preferable.

What makes Funny Farm a standout is the brilliant and well executed premise. It is fun to watch that premise unfold and there might even be something of substance there, like a satire on the American idealization of small town life. A sportswriter moves his wife to rural New England, hoping to enjoy a cheery, bucolic setting in which to write a novel. It turns out that the locals are not friendly small town folk, but petty, small-minded, greedy rubes. The acting and filmmaking bring the locals to life with the perfect blend of savagery and absurdity. The best part of the film comes when Chase is swallowed up by the local culture and finally becomes crazy, but makes being crazy look like fun. He becomes preoccupied with the burial of a corpse and murdering his mail man. At one point his wife says something like, “you’ve sunken into a pit of depression and alcoholism! And you’re enjoying it!” That is just so appealing to me.