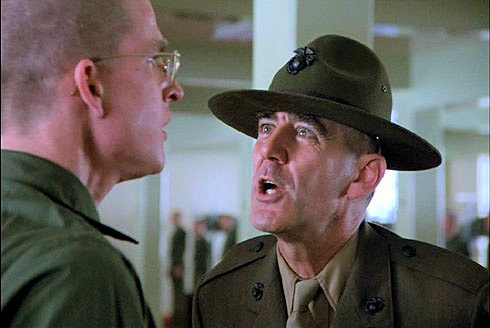 The totality of war, from the loss of self to ultimately the loss of life, has never been as thoroughly examined as in Kubrick’s much misunderstood Full Metal Jacket. Other films, of course, exist that portray the brutality (Platoon), the senselessness (Apocalypse Now) or even the joy (Patton) that is to be found in slaughtering your fellow man. But no film takes us through “the shit” from beginning to the sick, sick end like Jacket does. Our guide along the path to hell is Modine’s Joker; a young but scrappy Marine recruit with his eyes wide open. To me, one of the greatest joys in cinema is, for lack of a better term, character development. Watching a person transform from something to something else due to circumstance is, well, rewarding. Joseph Campbell termed it as “the hero’s journey.” Shorthand, think of either Luke or Han in Star Wars; they start out thinking and believing one ideal, and exit the narrative knowing and following another. For a real lesson on this journey, check out all three lead characters in LA Confidential (review forthcoming — I promise). Joker starts his journey as an arrogant but righteous little shit. In the middle of Gunnery Sgt. Hartman’s (the amazing R. Lee Ermey) initial epic tirade, Joker will not abide the playful yet ultimately sick racism thrown in his face. Hartman breaks him down with a “gut stomp” that leaves Joker broken, but largely unbowed. By the end of the film, Joker shoots a dying “gook” woman in the face. And how the hell did this happen? 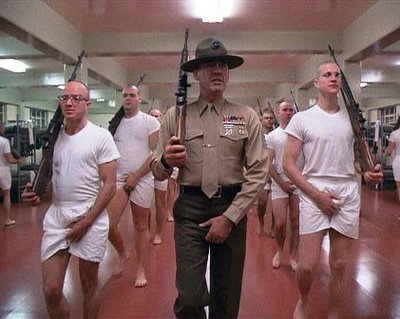 Full Metal Jacket begins with perhaps the most enjoyable forty-five minutes in the history of all film. Sgt. Hartman’s brow-beatings, even after the twenty-fifth viewing, are both colossal and hilarious. Most people I enjoy spending time with can quote them not only at length but verbatim — as they should! Ermey’s comedic timing is impeccable and really, unprecedented. A quick for instance; when Cowboy tells that he is from Texas, Hartman immediately snaps, “Holy dogshit! Texas? … Do you suck dicks?” I mean… fuck — brilliant! And I could go on and on and on because the vicious hilarity never ends (read the script for yourself, or better yet, watch the movie). And I could guffaw with you all night, but the question becomes why does Sgt. Hartman behave in the way that he does? To what purpose? What end? A few minutes before, Hartman answers my question, “If you ladies leave my island, if you survive recruit training, you will be a weapon, you will be a minister of death, praying for war.” Once you have internalized the comedy, you realize that Hartman is in fact offering the recruits a new outlook, a new philosophy if you will. One that must be implemented by utter force and that has an ugly end, but a complete system nonetheless. And, if you can past his brutal methods, you can see that he is quite, well “lovingly” is not the right word, but if these men are not trained, if they are not “born again hard,” they will in fact be in a “world of shit.” Hartman did not create the world of shit; he simply wants to give his beloved marines the best chance possible. Maybe “lovingly” is correct after all?

The turning point for Joker was the “sock party” beating of Leonard. To me it seems as if Kubrick went to great lengths in establishing the father/son dynamic between the two. Recall the “Jesus, you look like shit today, Leonard” scene where Joker is fixing Pyle’s clothing. The lost-dog look on Leonard’s face is a testament to the art of directing. One can almost imagine a dad getting his son dressed for church. And when it comes time to beat Leonard, an act that is against Joker’s very nature, he submits to the Corp and beats and beats and beats. Immediately afterwards, he is forced to cover his ears to hide Pyle’s screams. Even after nearly twenty years of viewing, that scene still chills me. Hartman and his methods have won out; the old Joker is no more. Leonard, of course, goes through the transformation but, see, he’s a non-hacker. Hartman turned him, but not into a Marine. Hartman failed, and in the cold logic of warfare, was ultimately punished for doing so.

I’m being too dry and I apologize — with a film such as this — quite similar to Dr. Strangelove — nearly every scene is not only memorable, but apparent. Obvious, even. Full Metal Jacket is near impossible to review — a challenge at any rate. OK, so we got character development, right? Keep reading: Joker becomes half hard after finishing up on Paris Island, but as soon as we get to ‘Nam,” he’s back, sort of, to his old John Wayne, wisecracking self. He is still playing the father-role, though. This time to an empty-headed yet idealistic photographer named Rafterman. Joker is now reporting for Stars & Stripes, a military paper that only runs two types of stories, “Grunts who give half their pay to buy gooks toothbrushes and deodorants–Winning of Hearts and Minds–okay? And combat action that results in a kill–Winning the War.” The echoes of today are unmistakable, which again points to the completeness and universality of Jacket. Joker mouths off to his editor one to many times and he and Rafterman are sent deep into the shit. Of note is a particularly grim scene where en route, they ask a door gunner that is shooting wildly at all types of peasants, how he can kill women and children. “Easy — you just don’t lead ’em so much.” Thus begins a descent into the worst and ugliest examples of the human experience. Comparisons to Apocalypse Now — among others — are obvious and easy. But I argue that Kubrick’s vision is much more twisted. For while Coppola’s tale is wild, boisterous and exotic, Kubrick’s does nothing but cycle between the mundane and death. For the last forty-five minutes of Jacket racism and ignorance are everywhere. More importantly, every other scene has the Marines dealing with dead bodies. Almost immediately the deaths lose their meanings. Hunkered down over a just-deceased soldier, Joker congratulates Cowboy on being named squad leader. And he means it.

It must be noted that this casualness is in fact Hartman’s doing, for its roots are back on Paris Island. Think of Hartman’s near constant marching and the chants he forces them to repeat;

This constant mixing of God and country with the absurd is drilled into the recruits. From Hartman bragging that both Whitman and Oswald learned to shoot as Marines to Joker worriedly telling Cowboy that he doesn’t think Leonard can hack it, pausing for a moment, and then continuing with, “I want to slip my tube-steak into your sister,” clarity of purpose is all but vanquished. All of it is hilarious on the outside, but ultimately a sick, sick survival method and nothing more. Remember when Animal Mother explains that he’s not going to die for “Freedom?”‘ If he’s going to die for a word, that word is “Poon-Tang.” And why the hell not? Since pin-pointable meaning has been entirely stripped from their existence, why not have poon-tang be what you die for? Makes as much sense as anything else. And why not shoot a dying woman in the face and then go marching off through a fiery war zone singing the Mickey Mouse Club theme? Hell, that seems almost sane! As Eight Ball says, “…under fire Animal Mother is one of the finest human beings in the world. He just needs someone to throw hand grenades at him for the rest of his life.” Amen.

Note:
Where does Jacket rank in the pantheon of Kubrick’s work?
Right near the very fucking top.