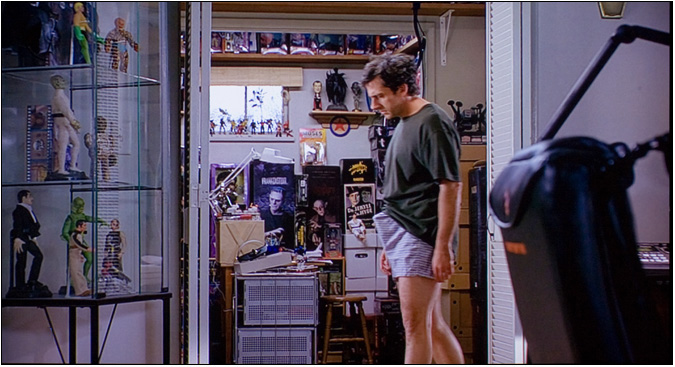 Before we begin, let me preface my remarks with an anecdote of minor humiliation that took me right back to my own days of teary-eyed virginity.  As soon as I uttered “Two for The 40 Year Old Virgin,” the teenage twits who occupied the ticket booth smirked and stifled the sort of laughter I was used to by their type, but not normally in this context. Fortunately, I was looking elsewhere at the time, but I assumed the words of my wife to be honest and true, as her own chuckles betrayed a shared delight in my oafish obliviousness. It was altogether fitting that I be mocked at that time, for what film is closer to my own pre-marital days of loneliness and grief than the story of an abnormally hairy man who couldn’t get laid in a whorehouse? Absent a fortuitous set-up by the girlfriend of a friend, I’d still be immersed in T.J. Hooker reruns and dinners with mom, and would likely have penned a similar screenplay, albeit one concluding with a messy suicide/office shooting-spree rather than an uplifting number from the musical Hair. And so begins the bitterness; there’s a review in here somewhere.

For all its moments of mirth and crotch-level jabs, The 40 Year Old Virgin is as much a fantasy as Lord of the Rings or Star Wars; a film that takes a premise with numerous possibilities for genuine comic insight and instead substitutes a plot turn so preposterous that it nearly leaves the planet Earth. Still, the concluding moments aren’t as unexpected as they might appear, given the bizarre flights of fancy that continually pop up to remind us that it’s only a movie. Such a title is surely not promising a Bergmanesque journey into the human psyche, but the obvious jokes about virginity and nerd-like obsessiveness could have been coupled with a grounded reality that would have remained true to the life of such a pathetic figure. Anyone who makes it to forty-years-old without at least one (brief) session of intercourse is surely a laughable creature, but there’s more to it than simply being intimidated by the fairer sex. And yet, the most unfortunate aspect of this film is not its one-note exploration of life as a sexless geek, but the eye-rolling inclusions of sexy, more-than-willing hotties who seem ready to take this virgin at any given time. The message seems to be; virgins are such by choice alone (lies!), and it’s simply a matter of being man enough to wade through the endless offers that await you. Say it with me, folks: bullshit. Andy Stitzer (Steve Carell) is every inch the virgin — surrounded by action figures (still in their original boxes to preserve value), content to remain in a risk-free, unfulfilling job, and clueless about anything not involving his own sad world. He’s the sort of guy that does his job, pays his bills, and remains dutifully loyal to king and country, which means he’s always the least interesting person in the room. Or is he? He might not be able to keep up with the machismo at an after-hours poker game, but his interests, while strange, are really no less so than the average man who passes for normal. After all, being fanatically devoted to 70s action stars is surely no different than following with bated breath the on-field actions of professional athletes, yet one is considered insane, while the other the surest sign that one has a big cock and is willing to use it. It’s simply a matter of taste, and yet we laugh at the former because, well, we’ve been trained to believe that cocks not being used are always connected to such devotions. Andy may not be my first choice for a dinner companion, but I would much rather have him on my speed dial than his more experienced co-workers who are, to a man, poster boys for arrested development. Yes, we tell ourselves, these juvenile pranksters are indeed the ones getting laid in these United States, but that’s less a problem with men like Andy than a testament to what now passes for sex appeal.

It seems fitting, then, to focus almost exclusively on the frightening levels of unreality, as anything else would resemble a laundry list of predictable crassness: the old man with a filthy mouth, the morning wood, the body-waxing with blood-curdling, expletive-laden screams, the scenes of drunkenness, the sight gags involving condoms, etc. None were particularly inspired, nor were they the least bit humorous. The antics of David (Paul Rudd), for example, are not at all interesting, and it says quite a bit that during his pathetic longings for an ex-girlfriend, I could only think of how quickly such behavior would get you fired in the real world. Instead, this work environment (called SmartTech, but obviously a stand-in for Circuit City) is a virtual circus of moonings, screaming matches, mid-afternoon naps, and more overt expressions of sexuality than a season of soap operas. I suppose some people work in such a place, but because everything that occurred has been done to death in every single comedy since the Farrelly Brothers first hit it big, my area of concentration was forced into a consideration of what couldn’t pass in the real world. About the time the butchy boss Paula (Jane Lynch) offered Andy her bedroom services (“I’ll haunt your dreams,” she says), I checked out and decided to wait it out on another plane.

Of course I’m taking this lowbrow shit way too seriously, but even toilet humor must be mined for its appeal. One laughs quite involuntarily, which means I can’t convince you that this wasn’t a tale of tremendous appeal, but I’m certainly going to try. Given that Andy displays no affection for religion, we are asked to believe that a man could reach near middle age and never bang some whale for the hell of it, or simply secure the services of a prostitute. I refuse to believe that someone not beholden to Jesus would ever wait that long, even if crippled by an introversion usually reserved for monks. At some point there would have been a moment of weakness. Do you remember your loins at eighteen? I would have fucked a light socket to get off, and only a truly shitty job kept me from blowing a wad on some temptress of the street corner. Yet Andy, unlike myself in those days, is far from a lost cause, which is evidenced by the incredible appeal he seems to display whenever he walks into the room. He stupidly hits on a hot chick (Elizabeth Banks) at a bookstore, and needless to say, she is so smitten that she all but strips right there by the self-help tomes. That relationship leads to even more implausibility, as she is a nympho of the highest order, which means that dirty talk and the promise of a wild run in a bathtub are but a few scenes away. Surely you know nerds who come across such women on a daily basis. Shit, even my rub-it-till-it’s-raw bouts of self-abuse weren’t that erotic. And yet this guy has to fight em off with a stick. Flesh and blood women! That don’t require a bicycle pump!

Andy also meets up with Trish (Catherine Keener), no slouch herself, and once again, the virgin is seduced by the drooling female. Remember, he is a salesman in an electronics store, and she is a customer buying a DVD player. As packed with potential as such a scenario is for, uh, nobody — it is made even more outrageous by the fact that she throws out a phone number on the basis of one of the least effective seduction sequences ever filmed. Fine, this is Hollywood and we’re supposed to be having fun, but the geek in me will not stand by and allow hope to be given to anyone more enamored with Jean-Luc Picard than Christy Canyon. By definition, virgins, nerds, geeks, and losers must never have even a remote chance of bedding a female, unless of course the event is the result of a dare, a bet, a threat, or some sort of financial transaction. If all that were required was mere effort, there wouldn’t be a virgin left on earth! Some are born to be rejected time and time again, whether in the form of a laugh-filled hang-up, a slammed door, or a call to the authorities after an accusation of sexual harassment.

And yet, despite the dismissal of the nerd’s actual daily experiences, I championed Andy’s cause because, for once, I wanted to see the outsider win on his own terms. Of course, when I say “win,” that means “lose,” which is actually a victory for those convinced life is a stacked deck. During the obligatory “fight that threatens to end the romance,” Andy does retreat to self-protection, displaying a hostility that was long overdue. Maybe he doesn’t want to sell his prized collectibles, and maybe there really is more to life than fulfilling the expectations of our consumerist, can-do culture. And who gave this woman the go-ahead to change me, anyway? Men make too many compromises when they succumb to the wiles of the whip, and I instinctively applaud the few remaining holdouts, wherever they might be found.

But change he does, and in a turn that nearly had me apoplectic with rage (fine, I sat like a stone, but I needed the proper imagery), he sells his life’s work not for a piece of property or a vacation of a lifetime, but to finance the wedding! Even a comedy nearly drowning in bodily fluids can’t resist tipping its hat to convention. What’s worse, this sap willingly signed on with a woman who already had three children! Could this virgin be any more of a pussy? But because he is the hero of the piece, we are meant to nod with approval at the abandonment of all principle for a few seconds of orgasmic delight. Trust me dude, when your entire paycheck is going for school supplies and cell phone bills, you’ll long for those days when, resting in a sparkling clean apartment, you could eat, read, and shit in monastery-like silence. Typically, the woman doesn’t sacrifice a fucking thing, and gets an additional source of income to pay for her mistakes. No, really, women are the disadvantaged class.

**UPDATE, 12/12/06 — While I agree in principle to many of the things I wrote well over a year ago, subsequent viewings on cable have proven me wrong in one respect: I love this movie. It’s funny as hell and there’s no denying it. Carry on.