Admittedly, Heart of Glass is a difficult film to review. Comprised of some of the more mesmerizing scenes ever captured on film (specifically the opening shots of the river of clouds and also the glass blowing factory going at full tilt), this bold allegory from
our man Werner Herzog is not easy viewing. And it is not supposed to
be. I guess what I find difficult about it is the loose narrative
thread and the plodding pace. Taken individually, almost every sequence
of the film is noteworthy and entertaining. I feel as if the scenes
never link up, even though upon reflection, they absolutely do. I’ve
seen Heart of Glass twice now, and yes, it is better the second
time, which to me is the hallmark of a good work of art. Set in a small
village in Bavaria circa 1800, the plot involves a master glass blower
who goes to his grave without telling anyone the secret to his
beautiful “ruby glass,” red glassware the color of blood. Quite
beautiful pieces really, in a bespoke, boutique way. The (for lack of a
better term) feudal lord of the village, a man named
Huttenbesitzer (Stefan Güttler) who owns the glass factory, is
desperate to regain the secret of the ruby glass and essentially
destroys the town attempting to re-discover it. Concurrent with this
plot, is a prognosticator named Hias (Josef Bierbichler) who lives in
the woods and makes dire predictions about the fate of the village and
its inhabitants, including the fact that the glass factory will burn to
the gournd and the earth will descend into an era of upheaval;
destroyed, so it can rise again With me?

Now, before we go any further, you must know that Herzog had
the entire cast hypnotized. Yep, every single actor was under hypnosis
for every scene. The result, while obviously “weird,” is in a way
enchanting. The characters seem to just inhabit space and then
arbitrarily begin speaking and/or acting. Odd, sure, yet, as the film
goes on the “gimmick” works–at least for me (for his part, Herzog
furiously denies the mass hypnosis was a gimmick). Initially it leads
to some rather hilarious situations. Like these two guys who are drunk
and sitting across from each other at a table. One guy smashes his beer
mug on the other man’s head. Knowing Herzog and his penchant for
“reality,” this was a real glass, literally smashed on someone’s head.
The smashie doesn’t even flinch. More remarkable is in retaliation, a
beer is poured onto the smasher’s head and he doesn’t blink! I
backed it up and watched the beer flowing down the man’s face and his
eyes are open the entire time. One can imagine that via hypnosis,
Herzog commanded the actor not to shut his eyes. Quite peculiar. Yet,
somehow, quite marvelous. There are several other parts where I assumed
that Herzog instructed the characters to act in a certain way. For
instance, one guy looks absolutely terrified while another man standing
next to him is almost giggling. Mostly though what struck me is how the
people really don’t react to each other. It is like taking bad acting
and running with it. Characters stare blankly until it is thier turn to
deliver their lines. Again, I found it to be plodding, but as the movie
went forward, it made more and more sense. 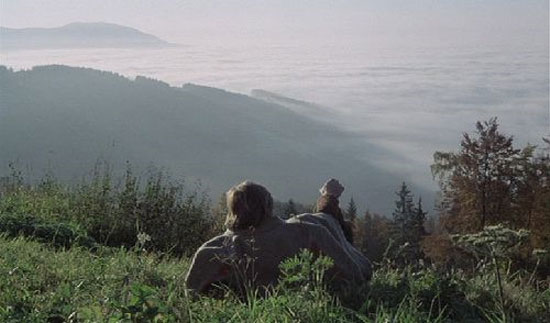 The story gets into gear when Huttenbesitzer decides that he
simply must get the formula for the ruby glass. Like many Herzogian
themes, the guy’s passion is an exercise in pointless futility and
madness. The master glassblower is dead and the secret is gone, yet
Huttenbesitzer insists that it must be found. At one point he wants to
exhume the dead man’s body and have Hias talk to it. Then he
requisitions a sofa from the man’s widow because he feels that the
secret must be inside the fabric. He rips it apart with a letter
opener, “discovering,” that yes, the formula is in the couch,
but it is out of order. In reality, he’s simply holding sofa stuffing.
The question becomes, is he simply hypnotized, or just plain mad? I
feel the answer is actually either; both. The actor’s reaction is that
he has found the secret all jumbled up, but the character is intended
to appear totally insane. The lack of commentary, disagreement and even
reaction by the four men standing around him, only adds to the quality
of his craziness. Huttenbesitzer then decides that the way to get ruby
glass is to take existing examples of the product and throw them into a
lake. The townspeople he assigns to do this abscond with the valuable
pieces and smuggle them over the border to sell. Interestingly, I was
reading in Herzog on Herzog that in the remote Bavarian town
Werner grew up in just after the War, it was common for his mother and
others to slip across the border into Austria to trade and barter.
Anyhow, Huttenbesitzer eventually goes so completely nuts that he kills
his maid because he feels that human blood is the secret to ruby glass.
Similar to Aguirre: Wrath of God
insomuch as the obviously senseless (to the viewer) pursuit of material
goods leads to quite horrific but entirely avoidable ends.

Hias spends a good deal of time making predictions which are
quite obviously about the future history of Germany, specifically World
Wars I and II. Stuff like the country will go astray and a giant from
across the sea will come and defeat it. While I appreciate what was
being expressed, I found the metaphor too obvious. Also, perhaps a bit
unnecessary since Huttenbesitzer’s mad quest is also an allegory for
Germany’s crazed pursuit of land and power that ultimately led to both
World Wars. Still, I have a hard time faulting the film because it is
so far out of the mainstream, so truly different that I may not have
“got it.” I’m not talking about some David Lynch drek either where there is no meaning
yet people jump through all sorts of hoops saying, “maybe he meant
this” and “maybe he meant that,” no. I fully understand what Heart of Glass
is about, but I know that only subsequent viewing will reveal the “why”
behind how the story was told. Take for instance the hypnosis,
ostensibly a stunt in my mind the first time I watched the film, now
seems to be quite significant to the message. How exactly, I can’t say
concretely, but my current theory is that Herzog and writer Herbert
Achternbusch are trying to show us that “normal” human behavior is
exactly as prescribed as the actions of those under the spell. We’re
all just walking automatons, reacting to phenomena in predetermined
ways. 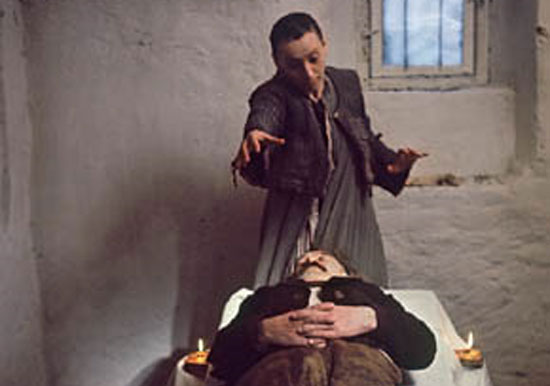 That’s my current thinking at any rate. Anyhow, Heart of Glass
is bold, challenging filmmaking that requires an active, maybe even
proactive, viewer. And I don’t want to make the film seem too academic,
for it isn’t. Be sure to check out Huttenbesitzer’s father who has not
gotten out of his chair for more than a decade and does little else but
laugh manically. Towards the end, when the town is in flames
(literally) and he does indeed stand, all he can do is wander around
his mansion looking aimlessly for his shoes. Essentially, Armageddon
has come down on his head and he is so myopic that he doesn’t even
notice. Drowning in the minutia, so to speak. Good stuff, and I’m
undoubtedly going to have to watch Heart of Glass again. Which
is fine, because this film is not only filled with gorgeous imagery and
intriguing scenes, but how often do we find films that demand analysis?
I just need to put all the pieces together and see it as a whole, not
as scattered vignettes, and I look forward to doing so. If you are a
fan of Herzog, even just a little, I recommend this movie for it is one
of the more obscure and opaque films from a director known for exactly
that. Plus, like all Herzog films, Heart of Glass is a treat for the eyes. Especailly on DVD. Oh fuck… maybe I should just listen to Herzog’s commentary?