SONGS FROM THE SECOND FLOOR 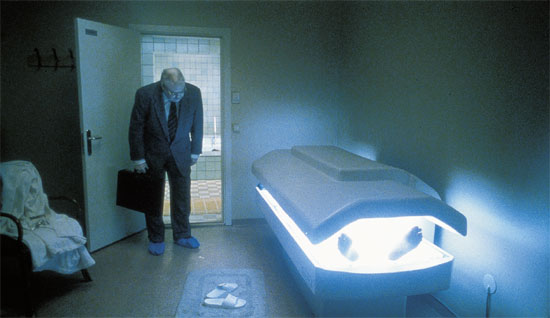 Yes, it was accurate to describe this film as a cross between Luis Bunuel and Ingmar Bergman, if by that one means “somber surrealism.” Songs from the Second Floor, a bizarre, frustrating, yet compelling collection of nonsense, social commentary, symbolism, and striking humor, will certainly alienate the vast majority of viewers, but more daring individuals should tough it out, as the best scene occurs at the very end (more on that later).

It would pointless to describe a story or even characters, as the intent of the film is not to follow any sort of coherent path. Still, there is more at work here than a series of maddening imagery; we are in a bleak, cloud-filled Sweden, but we could just as easily be in any corner of the world that experiences economic dislocation, depression, and confusion. The main thrust of these scenes is that our identities are so wrapped up in how we earn a living, a sudden disruption in that sense of identity leaves us bereft and utterly clueless. From the parade of self-flagellating workers to the “refugees” from a destroyed office building, we are witnessing a literal breakdown in the social order. One character keeps repeating something about “what one must do to put food on the table,” while another wanders around a Hopperesque diner asking others how to leave the establishment. 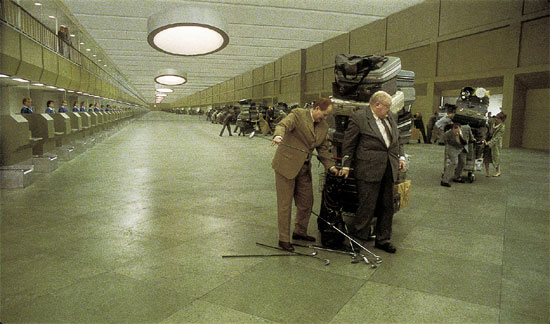 And then there’s the scene where a beleaguered gentleman volunteers to be sawed in half by a magician, only to learn that it is in fact no trick. Even better, there’s a board of corporate officers who, in concert with the clergy, ritualistically sacrifices a young girl by pushing her off a cliff. Is this killing a plea to the gods? A nod to superstition in the hopes that the economy will improve? No one is saying for certain, although it is clear that the film asks us to consider what we would tolerate from our “leaders” if the situation became truly desperate. But the best scene involves a desperate salesman, who has now turned to the religious market, peddling crucifixes of various sizes. He is enthusiastic at first, later discovering that there is no market for the values of Jesus (whom he calls a “crucified loser”) and as the film ends, he dumps his inventory in an isolated field. To watch this man fling massive crosses, spill boxes all over the ground, and run over part of the pile with his truck is to truly enter the world of Bunuel. I’m sure the old master would have applauded. But is the filmmaker arguing that our world is too sinful to accept religion as a tool for social change? Hardly. Religion, like any other self-help gimmick, is a salve for many feeling the sting of life’s disappointments, but at bottom is as valueless as a charm bracelet or a rabbit’s foot. In the end, as some hopefully (and do, in this case) realize, Jesus Christ CEO won’t feed your family or keep creditors at bay. He’s just some dude nailed to a few pieces of wood.

The characters — especially the men — of Songs from the Second Floor remind one of the blue-faced zombies in Romero’s Dawn of the Dead. They ramble incoherently, shuffle about, recite odd, disjointed poetry, and because they are unemployed, have nowhere to go. Stripped of a purpose (or at least that which our system defines as a purpose), they wander the earth glassy-eyed, dirty, and unkempt. Even when there is a scene of refugees trying to leave the country (presumably for better times elsewhere), they are locked in place as they cannot pull themselves from massive piles of junk. These possessions are also a form of identity, and even though burdensome, are inconceivable as anything but vital links to the world of meaning. We may yearn for the “simple life,” but when pushed, would never really pursue a course where we were required to make the necessary sacrifices. Scaling down, or living virtuously, then, are precious in the abstract, but simply impossible in the modern world of our own creation.

I will admit that I wasn’t always engaged in the film’s peculiar vision, but it left me uneasy and contemplative, which is more than I could hope for. My sympathies are always with filmmakers who believe we are a rotten lot on the fast track to ruin, and for once such a message lacked all self-righteousness or smug moralizing. The filmmaker doesn’t have all the answers, only the understanding that we are mad fools in search of something, anything, to put us back where we thought we were better off in the first place. In this, we are a strange mix of pragmatism and traditionalism, with a dash of the reactionary for seasoning. If all of it doesn’t make any sense, don’t shoot the messenger. Life itself is far from linear.