Home / Reviews / Movies / THE SUM OF ALL FEARS

THE SUM OF ALL FEARS 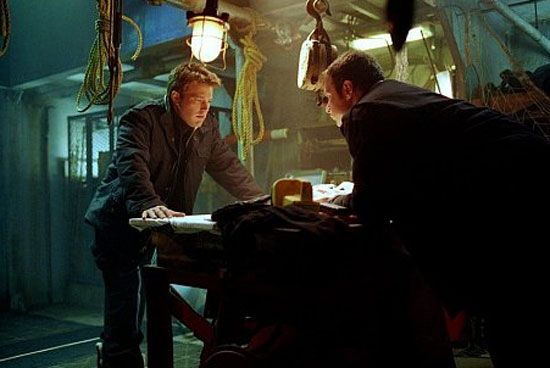 Based on the book by Tom Clancy

Jesus Fucking Christ! You watched another Ben Affleck movie? What the hell is wrong with you?

I needed to cleanse the taste of Will Ferrell from my eyes.

That’s not an excuse and you know it

I know… I was house sitting and it was the best DVD they had.

It was either The Sum of All Fears or Ice Age.

OK, the real reason I watched it was because the weekend before I judged a chili cook off and one of my fellow judges was Philip Baker Hall.

Yeah. He was funny. Anyway, he plays the hawkish Defense Secretary who keeps telling the president (James Cromwell) to nuke the Russians.

Ooh. Nukes are good. Wasn’t there a nuclear explosion?

Tell me about it. The initial blast was very well done. The president is driving away in his motorcade at a rapid rate because Affleck had gotten a hold of Cabot (Morgan Freeman) and warned him, “The bomb is in play.” All the limos are roaring away and then BOOM!–they get blown off the road by the over-pressure.

That scene was. And then Affleck’s helicopter gets hit by the blast and crashes.

Please. No, Ben Affleck can survive helicopter crashes caused by atom bombs. He is very much like a cockroach. Even worse, they show the blast hitting the hospital where his stupid, pitiful girlfriend works. Played by Bridget Moynahan (who was sex on wheels in I, Robot), Dr. Cathy Muller is the least interesting woman on the planet. The kind of woman who is more excited about her wedding registry and all the scented candles she’ll get than in her husband or the wedding. Anyhow, a fucking bomb goes off–on US soil–and we get to see her getting thrown to the ground.

She lives, too? Come on…

With only dirt on her face. Plus, if she would have died, then how could the sappiest, crappiest ending in the history of film occur?

You’re already at the end?

No worries on this end

So, somehow, Affleck single handedly prevents World War 3. Well, the somehow is that he “knows” that the new Russian President would never attack the US. Lest you think that our Commander and Chief tWit ever had an original thought in his life, Affleck’s rational for knowing that the Russkies would just not do this was the inspiration for tWit’s infamous, “I looked into [Putin’s] eyes and saw his soul.” And what of the fact that our leader not only sees souls, but is able to see the sould of the former boss of the KGB? Oh yeah, Bush Sr. was head of the fucking CIA. tWit is well versed in that kind of soul…

Uh… The Sum of All Fears?

Shit. OK, just started going. So Affleck saves the world and then Tom Clancy’s sick, military fetishism takes over. As the US President (played well by James Cromwell) and the Russian one (Ciarán Hinds) are signing some new anti-nuke treaty, a CIA assassin (Schreiber) is running around the globe gleefully slitting the throats of the people he nuked Baltimore. And while of course those men deserve death (don’t fuck around with nukes and civilians) the way in which the scenes were carried out was gratuitous and gross. Besides, if these fuckers can’t even make a nuke that can kill Ben Affleck, I mean, why waste the tax money. Hell, given them another bomb and let them try again. Anyhow, the underlaying message is that assasinations are good. Lame.

OK, I see what you are saying, but that’s why the ending was so bad?

No, it is so bad Affleck and his now fiancé are having a fucking picnic on the White House lawn. Please consider the hubris; you make a movie about an atomic bomb going off in a packed football stadium and the USA and Russia almost nuking each other and you actually expect any breathing human to give a flying fuck about Ben Affleck? Like, that’s how you want to leave your audience? True tripe, and it renders the entire film meaningless. Seriously, like you know how in True Romance every scene that Christian Slater is in fucking sucked, but every scene without was excellent? I’m talking Walker/Hopper and Gandolfini/Arquette. Same shit going on here, htough not nearly as good. Still, terrorists planning to and then nuking a big city? Cool. Ben Affleck speaking? Horseshit.

The Sum of All Fears is a complete and total disgrace when compared to the other films that comprise Clancy’s Jack Ryan franchise. Affleck even went so far as to claim that he got the blessings from Alec Baldwin and Harrison Ford to revive the character. What a couple of dumbshits Baldwin and Ford turned out to be. That said, both The Hunt for Red October and Clear and Present Danger are really good films, and even Patriot Games holds up. This one though, is a joke. A lousy, lousy joke.