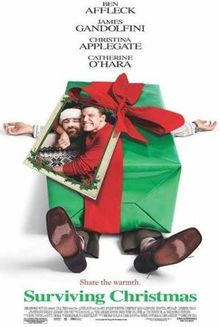 A lonely, obnoxious young millionaire pays a family to spend Christmas with him. 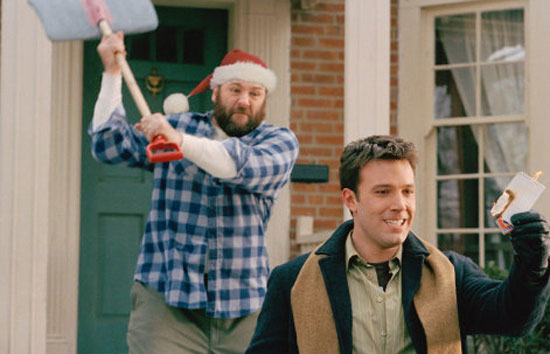 There is an iron-clad formula in the Christmas genre of cinema, which guarantees that more than any other type of film, it will be uniquely un-watchable. We first begin with a wacky premise, move on to “all hell breaking loose,” and then wrap up with forced sentiment completely out of step with the preceding madness. Such a conclusion is necessary, however, for no one is allowed to leave a holiday movie without believing firmly in the power of family. Mike Mitchell’s Surviving Christmas doesn’t disappoint in that regard, although it just might be far worse than others of its type. Let’s take the set-up, perhaps the lamest ever pitched to a major studio: Drew (Ben Affleck), trying to impress a girl and fill a void left by a lonely childhood, offers Tom (James Gandolfini) and his family $250,000 if he can spend the holidays at their house (which used to be his old house). It should surprise no one that Drew harbors a terrible secret, although we are led to believe that he is merely trying to win the affection of Missy, some rich chick who breaks up with him because he refuses to introduce her to his family. As she leaves, she states, “Christmas is the family holiday,” while also having the power to turn down a vacation getaway to Fiji. There’s no need to proceed, but I doubt Jonny would accept a lone paragraph.

From what we see, Drew is also obscenely wealthy, although it appears he’s little more than a product pitch-man (the opening credits find him plugging a “spiked” eggnog to “help people endure their families during the holidays”). One more thing about the opening credits, as it contained the one scene that made me laugh (albeit with a tremendous amount of shame and guilt). Among the bah-humbug scenes (some guy throws a gift out the window, families bicker), we watch some old woman bake cookies, set them aside, and cheerfully stick her head in the oven. Now that’s the spirit! Had the film taken this road, that the holidays are hell because families are largely embarrassing, unendurable, and offensive — hence the massive depression of the season — it might have worked. Instead, everything works out for the best because, well, no one had the balls to suggest that more people commit suicide this time of year because of large gatherings, rather than feeling “left out.”

Drew finds the Valco family after taking a $75 cab ride to the home of his birth. Taking advice from his therapist, he writes the word “grievance” on a slip and paper and burns it on the front porch. This attracts the attention of Tom, who promptly hits him in the head with a shovel. Dragged inside, Drew wakes up and makes his offer. He even brings over his lawyer to finalize the deal. Needless to say, this is precisely where the story leaves planet Earth, although we’ve come to expect an insane flight from reality regarding Ben Affleck after he tried to convince us that he could play a superhero (Daredevil, wasn’t it?) Drew’s terms are these: sing songs, go shopping, decorate a tree, allow him to refer to the Valco parents as “mom and dad,” submit to photos, fix him cocoa, go sledding, and have snowball fights. Soon, however, Alicia (Christina Applegate) shows up and, because she ruins Drew’s vision of the perfect family, must be referred to as Consuelia, the maid. Drew even hires a local actor to portray “Doo-Dah,” his ideal grandfather. I can only imagine what you’re thinking at this point. 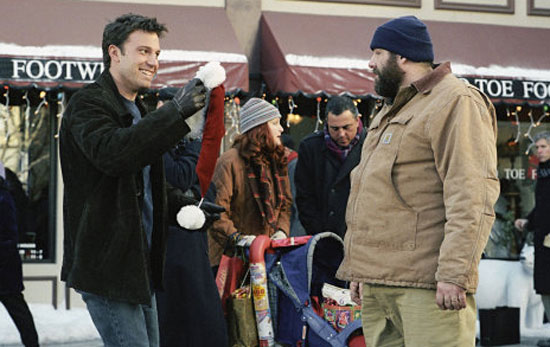 Let’s see here: Drew and Alicia hate each other at the outset, which means that they will fall in love, even though Drew is currently in love with someone else. But don’t you see, Missy is shallow and vain, while Alicia is earthy and real, so he must end up with her. And we also know that Missy and her parents will stop by the Valco home for a surprise visit, just as Drew is about to call off the whole deal, which forces him to assemble the Valcos together one last time. And wouldn’t you know it, Doo-Dah is called away to perform in A Christmas Carol, which forces his understudy to stop by. And it shouldn’t surprise you that the understudy is black, although no one seems to notice. And as mom and dad are giving Missy’s parents the grand tour, the little brother is caught on a porn site where the star picture is (drum roll) his own mother! Do I really need to explain all this? Labored, contrived, phony, and incomprehensible, I never thought I’d pine for the simplicity of Christmas With the Kranks, but at least that film declared its fascist intent from the outset. I’m not even sure there’s a message here, although it might be related to Affleck as a stand in for Jesus, for he comforts us so.

After all, Drew arrives just as the Valcos are splitting up, and because he buys Tom a car (appealing to his youthful spirit), sends mom to a photographer and makeover artist (spicing up her sex life), and plays with Alicia in the snow (helping her have fun for once in her life), he takes his own pain and saves others from making big mistakes. Despite the fact that Affleck’s Drew is nutty, obnoxious, and maniacal, he shows us that a lonely soul can be just the thing we need this time of year. His big scene occurs when he tells Alicia what happened when he was young: his dad walked out when he was four, his mom worked as a waitress, and she even had to take double shifts on Christmas, which means that poor Drew had to walk down to the coffee shop to eat an adult portion of pancakes each and every Christmas until he was eighteen. This speech is given, of course, with sad music playing on the soundtrack; the same tunes that played while Alicia told Drew about “that old oak tree” from her youth that made her feel so warm and special. Needless to say, this story passed her lips as the two cuddled under a blanket and sipped hot chocolate.

It all ends at a local coffee shop, of course, with mom and dad reconciled, Drew and Alicia laughing like school children, and even the younger brother chatting up a hottie so he won’t have to spend hours in his bedroom looking at internet porn. Missy was rightfully dispatched, as she’s apparently too sane to exist in this universe. As you can probably tell, nothing seems even remotely coherent and, despite 87 strained, overlong minutes, whole chunks of the screenplay seemed to be missing; you know, the pieces that explained character, story, and motivation. As everything is in the premise, there’s nowhere else to go on such a thin thread. Everyone acts according to the moronic demands of the script, and as such remain one-dimensional machines of sit-com behavior. People won’t ask obvious questions (like, “Why is grandpa black?”), will always fall down on cue, and if there’s a huge plate of food, we can set our watch by the moment when it will crash to the floor. And if we have to include Warrant’s “Cherry Pie” in an inexplicable photo shoot involving a “sexed-up” Catherine O’Hara, then what’s to stop us? So as Gandolfini contemplates his life after “The Sopranos,” he should take this as a painful first lesson. In fact, this might be as good as it gets.