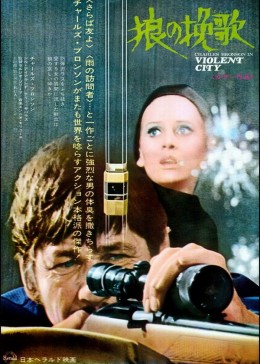 Violent City - Citta Violenta - Also known as The Family, to shamelessly cash in on The Godfather's success

A hit man is double crossed, then triple crossed. Women are to blame.

The Godfather gave you an offer you couldn’t refuse. The Family gives you no alternative. (what did I just say?)

Yes, only to find midway through that the movie takes place mostly in New Orleans with an American cast, and there is a legitimate English version (dubbed by the actual actors). Sadly, in the version I watched the Italian guy dubbing Bronson didn’t try to replicate his intricate speech rhythms.

Charles Bronson is a retired contract killer who gets set up by his young girlfriend and his last employer. He survives the attack and promptly embarks on yet another Homeric journey towards retribution.

Our god Bronson, when his hair was still black and his body was not puffy, his wife Jill Ireland when she was still hot and couldn’t afford a body double (yeah!), and Aristotelis Telly Savalas as bald as he’d always been.

None, as there are no Italian characters. Yet it should be noted that the only major character played by an Italian actor is the mob lawyer, a sleazy guy whose twisted upper lip is partially disguised by a suspicious mustache.

In order to get information from a mechanic, Bronson repeatedly closes a pickup truck door on the guy’s wrist. That’s about it.

Plenty. In their first encounter after the failed assassination attempt, Bronson takes Ireland to a dock alleyway, slaps her and tries to commit rape. He doesn’t succeed because some guys beating up a poor schmuck intrude on the scene. After they leave, Ireland talks to Bronson as if seconds before they had been holding hands and watching the clouds. Ireland betrayed Bronson at the beginning because she started dating a rich and powerful dude that wanted Bronson out of the picture; later on, it turns out that Ireland had married Savalas, who was an even more rich and powerful dude, and at the same time she was seeing the mob lawyer, who was orchestrating the takeover of Savalas’ money and crime empire… what I’m getting at is that Ireland’s character status as a whore is repeatedly and explicitly pointed out in the film. They should have used trophy wife for the sake of politeness, but ‘putana’ possesses an undeniable ring to it. And let’s not forget the scene of Bronson taking a trusting Ireland to an isolated spot in the bayous with the intention of murdering her, changing his mind at the last moment: was director Sergio Sollima thinking of Murnau? There are several other instances of Bronson pointing a gun at an unarmed Ireland. This first time was to check on her loyalty. The second time is before turning and shooting a bad guy. The third time is to put a bullet through her forehead.

Not applicable, but there’s what you might call a European comment on American law enforcement procedures. At the end of the film Bronson decides to commit suicide by cop, but the rookie that arrives to the scene doesn’t shoot him on sight. After expressing his disgust at the officer’s civility, Bronson feigns to reach for his rifle, forcing the cop to excitedly empty his six shooter on Bronson and become a man. The End. USA! USA!

Good, but should have been better. It begins with Bronson relaxing on a yacht with a bikini-clad Ireland, a cool title sequence and a suspenseful and well made car chase in the Antilles. The film follows with a slow but confident pace as it develops Bronson’s character, his conflicted relationship with Ireland and the nature of Savalas’ mob-gone-corporate. I expected it to be a buildup for Bronson to go full Point Blank/Parker on the bad guys’ asses but, instead, the plot devolves into a series of boring double-crosses and triple-crosses, a very pedestrian foot chase (sorry) and finally, thank Christ, a terse and merciless showdown.

The cast and location gave me some doubts about including it in the Italian 70s crime pantheon, but it definitely belongs here. Leaving aside the editing, music and tacked on gunshots (yes, the same sound effect featured in every Spaguetti western ever made, regardless of the weapon being fired), the virulent misogyny clinches it. The film credits six screenwriters and one of them is Lina Wertmüller. Her presence possibly accounts for the unusually sympathetic portrayal of Ireland as the femme fatale, who isn’t so much evil as she is weak-willed. It’s pretty clear that Ireland would like to keep fucking Bronson rather than any of the rich dudes (wouldn’t we all); the only reason she keeps resorting to non-lethal betrayals is because she’s forced into them and doesn’t expect Bronson to overcome his almighty enemies. She’s a victim of sorts, so it’s funny how the other male writers and the director still feel compelled to  punish her at every turn, all in order to safeguard their challenged Dago complexes. I guess Sollima wasn’t thinking about Von Sternberg or Buñuel, either.

A badass main theme by the Morricone himself.