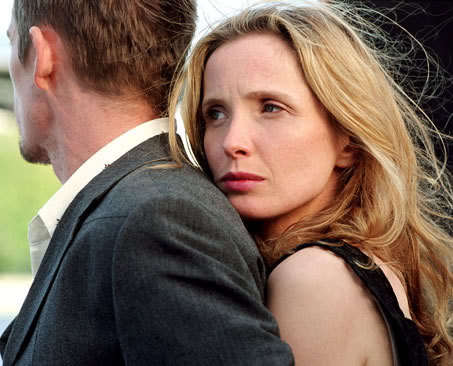 Richard Linklater’s Before Sunset is just the sort of film I needed right about now, as I thought my head would explode if I were subjected to more explosions, juvenile humor, or even the dreaded “one last heist.” The film itself is far from original — as it is a “sequel” to 1995’s Before Sunrise — but given the opportunity to spend an hour and a half just listening, I took it and am better as a result. Films composed entirely of dialogue, especially between only two characters, are ripe for cloying sentimentality, or at least obnoxious self-importance, but Linklater’s film avoids those traps because it doesn’t try to instill undue wisdom in its characters. These are intelligent, well-rounded people, but they are far from insufferably pretentious, which not only makes them accessible, but real. Their conversation, played out in the streets of Paris, is articulate and wise, but never seems scripted, which is either a tribute to the screenplay, or the performances of Ethan Hawke and Julie Delpy. I imagine it’s a bit of both.

As these are the same people we met in the earlier film — two young people who spent a blissful night together in Vienna before parting — it is essential to have seen the first installment. I suppose it’s not as important as watching, say, the first Godfather before visiting Part II, but the emotional connection will be lost without understanding what the characters themselves gave up that one day long ago. Their meeting in Before Sunset, though improbable, is not impossible, which helps to begin the film on the right foot. Jesse (Hawke) is in Paris on the last stop of a book tour to promote his novel, which is based on that meeting nine years before. As he finishes his talk, he spots Celine (Delpy), who now lives in Paris. The meeting is not accidental, however, as Celine saw an advertisement for his visit and decided to stop by. In a refreshing turn, their first words are not gushing, nor is the event pumped up by musical swells or buckets of tears. In a way, they greet each other as if they had just parted, which speaks to their connection, but also to the fact that neither has really forgotten the other. It was a quiet beginning, and had it been otherwise, I’m not sure the film could have recovered.

Jesse is about to catch a plane for home, but as he has about an hour before needing to be at the airport, he decides to join Celine for a walk through the city. They first visit a cafe, then stop for a brief ferry ride on the Seine, and along the way, catch up and get reacquainted, never seeming to miss a beat. While I have never been to Paris, seeing the streets and surrounding architecture filled me with a strong desire to visit, as the atmosphere lends itself to walking, chatting, and exchanging ideas in a way that most cities fail to inspire. I love the teeming masses of American cities, but whereas in those places one always feels rushed along by noise and speed, Paris seems to slow things down, almost as if it were possible to live in such a way forever. And yes, that’s really all they do — walk and talk — but I was never bored, never frustrated by any dead-ends in the dialogue, and in many ways, the relative calm left me ample opportunity to ponder the sad reality that far too few films respect an audience enough to not be in a hurry to get to anywhere in particular.

I’ve never really been an admirer of Hawke’s, but his Jesse is clearly a career highlight, and seeing Delpy again makes me wish I saw her in much more. She’s older now, less of a sex kitten, but just as fascinating to watch as ever. She’s rather unique looking, and although I wouldn’t say she’s gorgeous beyond reason, there’s something accessible about her beauty, as if she weren’t an actress at all. But her combination of wit, charm, cynicism, and a fading idealism, make her one of the more attractive characters I’ve seen all year. It’s clear that she romanticized that evening long ago, even to the point where she cannot move forward in matters of love, but she’s not so neurotic that she becomes difficult to endure. She now works for environmental causes and although she is passionate about her work, one wonders whether or not her work is a diversion from sadness. She presses Jesse at first to make sure he’s still “on board” ideologically, which might be her way of reinforcing her initial attraction to him. What’s more, she’s an atheist, which makes me wish even more that I could invite her up to my hotel room on the Left Bank.

Jesse is now married with a four-year-old son, but it is revealing that he fails to mention his wife until the conversation (film) is nearly half over. He loves his son (admitting that the time with him is one of his few sources of joy), but is merely “enduring” a relationship that long ago lost its shine. As the conversation went deeper into Jesse’s marriage, it becomes clear that this is not about him finding an excuse to run away or even press for an affair with Celine (as a lesser film would do), but rather to verbalize feelings — honest, raw feelings — for perhaps the first time as a married man. As he says, “Love means more than commitment,” which is one of the most insightful — and least pretentious — things ever said about love by a movie character. Thankfully he doesn’t say what love in fact is, but he understands (perhaps too late to help his situation) that if all that binds a couple is a sense of obligation, then the whole thing is beyond repair. And Celine, a woman clearly jaded after years of failed love affairs, has come to the conclusion that she needs to love and be loved, but is better as a person — more herself — when she is alone. Most people don’t acquire such wisdom until their deathbed, yet Celine has it by thirty-two. And yet she’s far from a pathetic loner; merely someone who has come to terms with her gifts, her limitations, and more importantly, the limitations of others. We can love and do so with generosity and truth, but the moment we ask another person to make life meaningful for us, we have gone too far and set in motion the course of unhappiness and unfulfilled longing.

The film ends on a note of glorious ambiguity, and as I had hoped, the traditional Hollywood resolutions were avoided. Jesse must leave for the airport, but that unavoidable reality is presented to him almost as an off-hand comment, rather than the typical goodbye that usually involves tears, tight hugs, and gnashing of the teeth. In many ways we can believe that Jesse wants to stay with Celine, but we know he will return to the duties of marriage and fatherhood. For one of the few times I can recall, Before Sunset presents unrequited love or the “chance romance” as appealing, yes, but inherently doomed as what makes it worthwhile is what causes it to end. Therefore, it’s less romantic than practical. Jesse and Celine do indeed have a connection and I’m sure the conversation would remain engaging for quite some time, but what they say to each other and how they say it is always framed by the recognition that their bond is temporary. I’m sure Jesse had such inspired moments with his wife at the outset, but then came the bills, the diaper changes, and the stress of work, and the words that were at first easy and full of life, eventually gave way to fatigue and occasional boredom. As we know, that’s why people have affairs — not only is the sex different, but it’s nothing more than a series of highs, all achieved before the lows of routine kill the excitement.

One of the most meaningful exchanges occurs when Celine remarks that when one is young, one feels that friendships and connections will fall into place with ease and striking regularity. But as the years go on, one begins to understand that the possibilities are fewer, the opportunities increasingly receding from view, and great, lasting relationships become more hoped for than realized. As they both know, conversations of genuine significance are so rare as to be non-existent, and most of the people who cross our paths will serve a purpose, perhaps make us smile, then disappear without a second thought. Why, then, have Jesse and Celine continued to remember that night together in Vienna? What made their encounter more lasting than most? The answer is the reason why, for me, these movies are so winning and wonderful. Their connection is intellectual, based on ideas, concerns, and issues, rather than superficial emotions and pure sexual desire. Emotions and sex fall into place in all great love affairs, but if the initial attraction stems from the mind, the dilemma that Jesse now faces with his wife is almost certain never to occur.