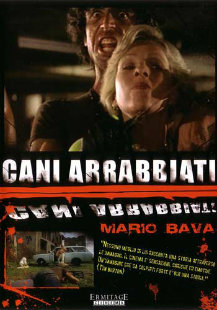 A robbery turns into a kidnapping leading to a steady tension punctuated by the odd murder.

Lock the doors, roll up the windows, and buckle up… for the ride of your life!

Three criminals steal a factory’s payroll and take a woman hostage during the bloody getaway. They hijack a car driven by Riccardo, a man in a hurry to take his sick child to a hospital. With the flimsy promise that they’ll be freed afterwards, Riccardo has to drive through the highways, avoiding the police roadblocks, while tensions grow among the criminals and his son gets steadily worse… 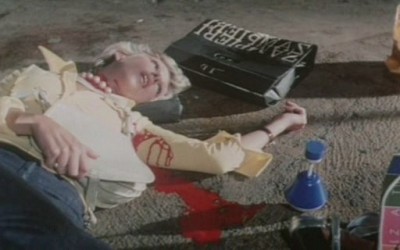 The nickname of one of the bad guys is Thirty-two, due to, we’re told, the length of his member in metric system units. He’s a borderline retarded giant with a thick beard and a sweatshirt, and drinks J&B directly from the bottle. Another of the robbers, Bistoury (named so for his love of switchblades, not for his penis), wears leather gloves, sports an almost-Afro and  three-day stubble and for a while he seems more excited by the prospect of watching Thirty-two forcing his manhood on the kidnapped lady than in scoring himself. Did I mention he wears leather gloves? After Riccardo bumps the rear of another car in a traffic jam and the lead robber, The Doctor, offers to pay for the damages, the owner shamelessly haggles for a couple of minutes over the amount of money it would cost to repair a fucking taillight. And last but not least, when Riccardo has to take a leak at a rest station and Thirty-two goes with him to the WC, none of them washes their hands before leaving. Assholes…

Ugly stabbings aside, the whole film can be seen as one single protracted aggression on the innocent characters. The threat of rape is ever present as Thirty-two slobbers from time to time over the kidnapped woman, but Bistoury prefers to discuss the delights of cutting up wee children whenever Riccardo gets a little too righteous. Even the Doctor, who is mostly concerned with giving orders and maintaining the discipline, is not above cracking a few jokes at the expense of the kid’s health or casually reminding everybody that once you’ve earned a life sentence a few more killings won’t make a difference. All that said, perhaps the cruelest torture inflicted on the hostages as well as on the audience is some Italian pop song barked a cappella by Thirty-two.

The woman foolishly tries to escape shortly after asking to go to the bathroom, so when Thirty-two and Bistoury catch her she’s forced to pee while they watch and moan and giggle. It is definitely intended to be disturbing, but it is becoming increasingly difficult in these reviews to sort the misogyny from the sadism and from, well, whatever makes Silvio Berlusconi special. At one point Thirty-two pulls down his jeans and asks the woman to check the veracity of his nickname, but the camera doesn’t follow. It does follow when Thirty-two and Riccardo run into a female acquaintance of Riccardo’s at the rest station, and we are given an abrupt, enormous close-up of the lady’s cleavage. Finally, there’s a vapid tourist in need of a lift who can’t seem to take no for an answer and pretty much forces her way into the car. She keeps inanely babbling while both the criminals and the hostages try their best poker faces, until she discovers the truth and a knife ends up protruding from her neck. I can’t say it shocked me.

Nothing to report. After Bistoury sort of unwittingly stabs a hostage, the cops sensibly decide to pull back rather than risk the safety of the other. This is not the kind of movie where they can send a badass vigilante cop who plays by his own rules and knows how to deal with the scum in the streets, man, and gets results and is not afraid of stupid chiefs or special commissioners or those bastards in internal affairs who don’t know about life on the streets, man, and is out for justice and lost a partner three days before his retirement and had to tell his widow and lives with his gruff yet lovable dog and eats cereals from the box and… (insert clichés here) 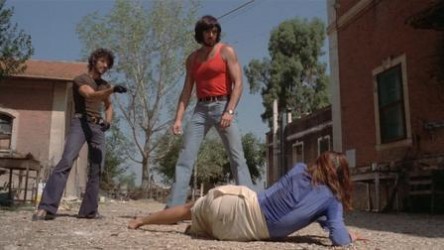 Fuck yes. Despite the ultra-low budget and a troubled post production history, this is a nasty little gem and one of Mario Bava’s crowning achievements, not to mention, one of the best poliziotteschi films ever made. Quite possibly the best, even if it is a very atypical entry and follows few of the genre conventions. Rabid Dogs wastes no time before the shit hits the fan: it starts with a fucked up situation, throws it over some unsuspecting normal characters and never eases on the tension up until the very end. The cruelty and twisted drives of the robbers are not cartoony displays of evil, but rather what you would expect from criminals too lowdown and stupid to know any better. These guys are like a cross between Clarence Boddicker’s gang and donkeys, and the sense of menace they manage to project for the entirety of the movie comes from being believable. Just think about some high school assholes from your teenage days and give them guns and knives.

To get all highbrow, you could call this film a study in hopelessness or say it is Funny Games on wheels minus the self-consciousness, but rest assured that Bava’s attitude is deeply felt and far from cynical, and his methods less exploitative than playful and pragmatic. In that respect, he is not unlike Takashi Miike, with whom he shares more than a few affinities. For example, the mentioned rack close-up would seem in bad taste and at odds with the mood of the film, but its function is to illustrate the visceral jolt Thirty-two experiences at the sight, as immediately afterwards he goes more or less out of control with the kidnapped woman. Even the plot twist at the end works: it feels like a slap in the face of the audience, and serves to further confirm Bava’s already bleak vision.

A dated, catchy, irresistible main theme by Stelvio Cipriani that gets played about a million times in the course of less than 100 minutes. At some point there’s also a barely disguised cover of Iron Butterfly’s ‘In-A-Gadda-Da-Vida’. I’m pretty sure I heard that one on Bava’s Bay Of Blood, too. And that the producers didn’t pay a cent in royalties.