Napoleon Dynamite is a film that is very easy to like, but at the same time, all too easy to hate. While I had neither reaction, I will admit to a curious level of disappointment, as I laughed early and often, only to fade into indifference and frustration. This is just that sort of film that is populated by the sort of characters who are attractive and appealing when we first meet them, but like family and annoying friends, hang around far too long, so much past the breaking point that by the end, we are scrambling for a quick and easy method of extermination. As a short film, this might have been a minor classic, but at nearly 90 minutes, the same jokes are repeated over and over and the implausible elements pile up without relief.

Like the overrated The Royal Tenenbaums, Napoleon Dynamite believes in a relentless eccentricity; creating situations and characters that are so beyond the grasp of reality that it becomes ridiculous rather than charming. Fiction has an unlimited license of invention, but as we might want to have a few dates with a flaky nutcase, we sure as hell wouldnt want to marry her. Napoleon (Jon Heder) is certainly an original (part clueless, disco-era dipshit, part retard, and an overbearing amount of arrogant asshole), but after the 35th episode of delusional incompetence, I was no longer a fan. He has an unforgivable perm/afro, zero fashion sense, and speaks with an empathic tone that immediately reveals his colossal ignorance. Hes insecure as hell (usually closing his eyes when he speaks) and is just the sort of person we can imagine possessing no inner life. Perhaps his attitude is the result of having grown up in the isolated Preston, Idaho, but rather than a satire of small town life, I think the film is nothing more than the latest effort to present smarm as fun and games. Theres no compelling reason to care about any of these people, as they are all dimwitted and selfish, but as I said, its not that theyre flawed, its that I could never imagine running into such people, small town or not. Without a bit of grounding, there is no connection.

Other characters include Pedro (Efren Ramirez), a recent immigrant from Juarez who has even less charisma than Napoleon, and is so self-absorbed that he doesnt see anything wrong with asking out the most beautiful girl in school (played by Hilary Duffs sister) and running for student council president even though hes arguably the least popular member of the student body. Then theres Uncle Rico (Jon Gries), a prick extraordinaire who, like Al Bundy, relives his high school football glory days at every opportunity (even filming himself acting like a quarterback in the front yard). His quirk is that hes always scheming and spends most of his time peddling a new and improved version of Tupperware. He is helped in his sales work by Napoleons sibling Kip (Aaron Ruell), a nerdish boob who spends hours in internet chat rooms, believes in the validity of time machines, and by the end, has turned into a gangsta rapper, thanks to his soul mate LaFawnduh (Shondrella Avery), a black woman (duh, with a name like Shondrella) who travels all the way from Michigan to meet her internet connection. The LaFawnduh/Kip hook-up has the potential for many laughs, but in many ways signified the point at which the film went off the rails. Not one second of their on-screen behavior remains believable, and in fact the whole thing made Kip less interesting, even though he was pretty repellant to begin with.

Napoleon Dynamite doesnt have any real story to speak of, which is fine, but the character sketches all run from broad to absurd. Theres a lesbian-ish grandmother who owns a pet llama and loves to ride a dune buggy, a karate instructor who dresses like Captain America, and a sign-language club that sings cheesy songs. Theres a scene where Pedro bakes a cake for his dream girl and leaves it on her doorstep, a scene where the school bully gets his comeuppance thanks to the help of Pedros La Rasa brothers, and a showdown at the student council debate where Napoleon puts his dance moves (thanks to a video he purchased from a thrift store) to work, to the unlikely applause of his classmates. Stretched out over the length of a feature film, it was simply too much to endure. Chuckles quickly turned to huffs and rolling eyes. 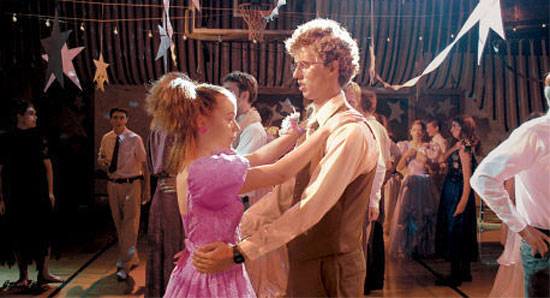 I have no doubt that this was fun to make, as well as write, and audiences seem content (my screening was a riot of good cheer and this film took home the audience prize at Sundance), but I was left wanting. People who have no core and are all behavioral tics simply cannot sustain my interest for an entire movie. Perhaps I am a bit annoyed at the obvious theft from Wes Andersons style, but the tone, one that dares you not to be amused, always puts me on the defensive. If you ask to be liked, I will respond with my own special brand of loathing. Director Jared Hess might be a filmmaker to watch once he develops a style of his own, but I have the sneaking suspicion that hell return to the Anderson well again and again. And why not? The applause has a way of stifling creativity.