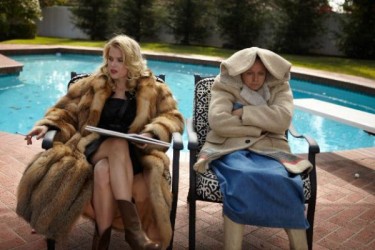 Fair Value of Decoding Annie Parker: $8.50. Samantha Morton deserves this year’s Academy Award for Best Actress. But before watching this film, ask yourself: how many slow cancer deaths do I feel like watching today? This is a heavy plate of misery for anyone to swallow.

Subtle as a masectomy and heavier than an MRI sequencer, Stephen Bernstein’s film is a grueling horror film of the banal. It’s everything that you probably didn’t want to know about the experience of breast cancer. I predict it’s going to be one of the most demographically and gender skewed films of the decade, in terms of popularity. For middle aged woman, it will be a brave triumph, a film that shows the world the ordeal of breast cancer. For men….well, if your spouse or girlfriend takes you to see this film, it means that you’ve committed the most horrible offense short of actual grounds for divorce. In the long run, this film is going to win a few awards, raise a good amount of money, and ultimately forgotten.

Body Horror for People Who Don’t Like Body Horror

Annie Parker (Samantha Morton) lives in a family accursed by cancer. Her mother dies of cancer, her aunt, her sister, and her husband (Aaron Paul). Historically, she’s important because she was one of the key case studies that led to the discovery of the BRCA1 gene, which is now used to screen women for cancer. This film follows the adversities of her life as she goes in and out of chemo, and tries to maintain her lower middle class existence in Toronto.

At the same time, in a parallel plot, Dr. Mary King (Helen Hunt) is battling against the sexism of the medical establishment to conduct her studies to try to find a genetic link to breast cancer. It’s a long, slow struggle to get funding, computer time, and to correlate the findings. While ladling on the scientific exposition and a few jumbled metaphors to explain genetics to the lowest common denominator, this sub-plot is too linear and expository, serving as a distraction to the main drama.

Decoding Annie Parker is about how cancer turns your body into your enemy. They cut and amputate more and more; your hair falls out in clumps; your flesh pales and assumes the texture of oatmeal in a plastic bag. It’s body horror lite, rather than a Cronenburg film. The suffering is contrasted against the sterility and coldness of Toronto hospitals. It’s interesting to think that this biography wouldn’t have happened in America- had Annie lived in Michigan, she’d have been broke and dead no later than 1976. 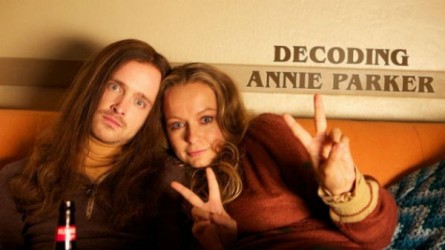 Decoding Annie Parker also works by showing how cancer traumatizes loved ones. Even though Annie survives, it ruins her marriage and her friendships. By the time she recovers from her first bout of cancer, Annie’s lost her husband, her best friend, and her son resents her; the very act of physical survival gets in the way of social survival.

Stephen Bernstein tries to leaven the trudge with black comedy, including some running gags about the people you encounter while arranging funerals. The comedy is hit or miss, but does keep the film from being too much of a downer before the final act. Likewise, the fashion gags of the film is less nostalgic and more reminiscent of the gimmickry of That 70s Show. To really convey nostalgia, you have to remember that not everybody was following every fad and every trend of the times.

Fortunately, Bernstein knows how to cast well and how to let the actors do their work. If  nott for the considerable talents of Samantha Morton, Aaron Paul, and Alice Eve, this film would have sunk beneath the many hammy lines of the script. This movie is difficult travail, one that would be too grim to watch were it not for Morton’s luminous and gripping performance. Once again, Bernstein gets the optimal performance from his main actress. If you are in the mood for misery, and if you want the awfulness of cancer to be fully conveyed to your mind, then Decoding Annie Parker is a film that serves. It’s not a film for an impulse viewer, however.