The Legend of Ron Burgundy

Jonny has so much hatred in his heart…

I’m just going to say this up front. Will Ferrell is not funny. At all. The only legitimately funny thing he has ever done was to play Alex Trebek on Saturday Night Live’s recurring “Celebrity Jeopardy” bit. And only because people were mercilously insulting him. I also must add, the only remotely funny thing SNL has done since Bill Murray left the show. And what drives me nuts is that so many people think Ferrell is funny. He’s not!! He has one fucking gag, the one where he is like 88% gay and then he takes his shirt off. That’s his whole fucking shtick. And you assholes eat it up! Anchorman: The Legend of Ron Burgundy, Ferrell’s latest vehicle of shame and horror has made over $60,000,000. One of our original ideas here at Ruthless, way back when before we got all over-worked and lazy, was this award; The Best Fascist Dictator Ruthie. The winner of the award was you. Cause see, Adam Sandler, Chris Katan, Rob Schneider and Will Farrell are allowed to continue to make movies–and what rotten movies they are–because you fucking assholes go and see them. Yes, you! You fucking asshole. Me? Only for this site man, only for Ruthless. OK, fine. I liked Duce Bigellow.

Anchorman… OK, so there are three or four funny parts that are not direct Simpsons rip-offs (there were probably a dozen or so moments where I laughed, but most of those were at Steve Carrel of The Daily Show fame because A) Carrel is inherently funny and B) Carrel was playing a grown up Ralph Wiggims). The funniest of those moments being when Ferrell called Christina Applegate a “pirate whore.” That’s just a really good phrase which I intend to use in my personal life. Another funny part was when he said to Christina Applegate, “You’re a whore and I intend to slap you in public.” And then the other funny part involved Fred Willard explaining to a nun why his son has German pornography. And then in this one part where the movie was for some reason ripping off the opening battle scene from Gangs of New York, (but with TV news people, get it?) Steve Carrel’s weapon is a hand grenade. But instead of pulling the pin, he just holds it out in front of him and screams. There, that’s it. Those are all the funny parts from Anchorman. 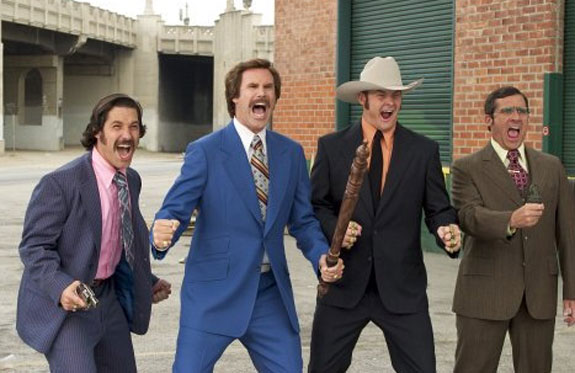 Everything else in the movie is just the same, tired crap we have seen not only Ferrell, but the entire cast of the film, do over and over and over again. Seriously, everything else sucked. The film was so base and typical there was even the old man gets punched in the balls bit. Yawn. I can imagine some of you shaking your heads and saying, “No, no, no! There were other funny parts!” I say first, fuck you, you asshole, and second, one day I have faith that Schultz will use his millions of dollars to build the comprehensive, all inclusive Simpsons database so that I will be able to accurately pinpoint exactly which Homer gags Ferrell ripped off. The most obvious one being right after Ferrell and Applegate have sex (and that part follows one of the least funny segments in modern cinema, Burgundy’s “jazz-flute” performance) she says to him, “Try to be discrete about this.” So, of course the next scene is him screaming at the top of his stupid lungs about how they had sex and then he broadcasts it on the Six O’Clock news. The Simpsons Episode from this season (uh, 2003-2004) where Skinner and Krabappel are going to get married but Skinner gets drunk and admits to Homer that he has cold feet and Homer promises not to tell anyone and then the very next scene is Homer telling Marge (though it must be pointed out that the Simpsons version of the joke was way funnier because Homer said, “Hey Marge, Skinner has cold feet,” but Homer never even so much as got up from his bar stool).

Another thing about Anchorman that fucking chaps my hide is all the assumptions it makes. For instance, it just goes ahead and assumes that the 70s were funny. This has been a tactic SNL has been using more and more as their incredibly tiny reservoir of writing talent continues to dry up. They have absolutely nothing funny at all to say or have the characters do or say, so they hit you with site gags. “Butterfly collars and moustaches equal laughs!” No, they don’t. Maybe to children or the simple minded (OK, so there were two people in the theater I saw Anchorman in that laughed at every single thing Farrell said, whether it was intended to be funny or not), but if you are setting a film in the 70s just for the laugh factor, well, go fuck yourself. There is so much more to the 70s, especially from a cinematic perspective, than funny clothes and hair that the people who wrote this should just fuck themselves with Lava Lamps then die. Ignorant assholes. And I don’t want to make it seem like I think the makers of Anchorman know anything at all about film. They don’t. You know what, I just want them dead. And fuck you if you paid money to see this movie. And fuck you twice if you have ever thought Will Ferrell is funny. And fuck you three times, baby, if you watch Saturday Night Live. 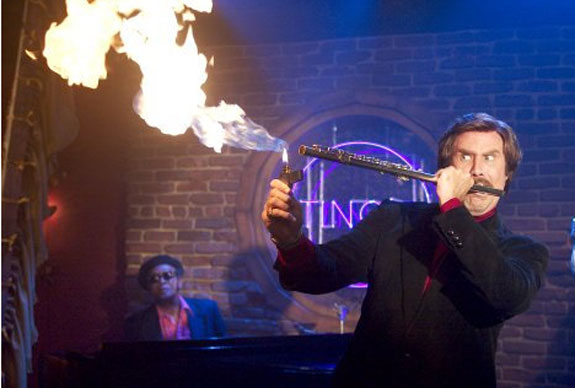 his next part I don’t really know how to phrase, but in addition to Will Ferrell, Vince Vaughn, Ben Stiller, Luke Wilson, Jack Black and Tim Robbins all made worthless cameos (Though Stiller’s, naturally was the dumbest as he played an anchorman from a Latino station giving the great over-exposed one the opportunity to trash a ninety-minute movie with thirty-seven seconds of bad acting) and well, I just hate all of them so much for appearing in this movie. I just, I mean, they all suck. Not that Stiller and Vaughn have been anything but rotten for the past half-decade, but Luke Wilson can do a good movie every now and again and same goes for Tim Robbins. OK, Jack Black, not so much, but… What the fuck is wrong with these guys? I know they are not doing it for the money, since the total budget for this extremely unnecessary time-waste was like $26 million–still a ridiculous number but nowhere near the level needed to pay all those mega-egos. So why did they do it? Because they thought it was a good script? A funny part? Jack Black gets hit in the face by a burrito. Luke Wilson gets both his arms torn off, and not in a funny way. Tim Robbins pushes Christina Applegate into a bear pit (not nearly as funny as it sounds, trust me). And the final humiliation is that a talking dog saves the day. Fuck… is something wrong with me? Am I the crazy one? Do actors have any sense of discrimination at all? The answer of course to all three of those questions is a big fat ““NO”. Anchorman sucks a big one, and for some reason all these actors are under the impression that they are doing something either funny or good or… I just have no idea. Don’t see Anchorman. It’s lousy.