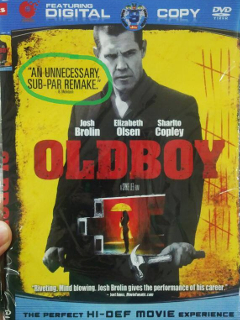 Time to remake the remake.

So they remade Oldboy. Yep.

Anyway, there’s apparently a director’s cut of this film that is at least 35 minutes longer. The producers took it away from Spike Lee and sliced it down to this mess. In protest, Spike Lee opens the movie by calling it a “Spike Lee Film”, and not a “Spike Lee Joint”. Now, I’ve never understood what a “joint” is supposed to be, exactly. I’m too white, I’m afraid. But it still speaks volumes that Spike Lee abandoned his trademark on this outing. Hasn’t he been making movies for a couple of decades? What is the matter with the producers? God fucking dammit, guys.

I’m not even a Spike Lee fan, and I’m not going to fall all over myself in an attempt to prove my cultural sensitivity by acting like I’ve seen all his movies. I think I’ve seen Do The Right Thing, Girl Six, Bamboozled, Summer of Sam, and Inside Man. It’s not that I dislike him; I haven’t viewed enough of his work to have a strong opinion one way or the other. He’s just never been a director that I’ve gotten around to, and really, I know him more from his hilarious attacks on everyone from Quentin Tarantino to Clint Eastwood. But still, I’d like to view the whole movie that he prepared for us, and not your bullshit approximation of it. Is nothing sacred anymore?

So not only is this film a remake, but it’s also a victim of Kingdom of Heaven syndrome. Maybe the eventual director’s cut will be awesome and all us film geeks will forget the theatrical cut, like with Kingdom of Heaven. Or maybe we’ll never see it, and like John Woo’s fabled 3 and a half hour cut of Mission Impossible 2, we’ll never know what could have been. But the truth is more likely that this is an Ultraviolet situation, where the full, still unreleased cut is probably much better than the theatrical version, but not necessarily an outright classic or anything. In other words, they should have just released the full cut in the first place.

As an aside, a little over a year ago I rented the Samuel L. Jackson film The Samaritan (which according to Wikipedia is also called Fury) from RedBox. I watched it without knowing anything about it, but some of the later plot twists made me realize (or so I thought) that it was the Oldboy remake. (Disclaimer: I was renting a room in a house filled with pot smoke 24/7 at the time). Afterward, I thought that it was actually an interesting remake of Oldboy, since they just took a few plot points and radically changed everything else. It was nothing fancy, but it was a nice little DTV thriller and I didn’t feel like I wasted $1.

Then I found out that it wasn’t the remake, and that the real beast was still coming. Oh God.

So now it’s a year later and the official remake has come out. Like The Samaritan, it features Samuel L. Jackson, though unlike that film, Jackson looks completely ridiculous. He’s sporting a bleached blonde mohawk thing and… I can’t even describe how his appearance made me feel. It’s been a long downhill slide ever since Mace Windu, and despite some great moments like Django Unchained, Jackson just keeps popping up in retarded movies. He’s still awesome in them for the most part, but I just don’t know what to say.

Sam, I think it’s time for a break. You know, you don’t need to be in every movie. Is your presence in Guardians of the Galaxy: Prelude to The Avengers, Part 2: Now with Emma Peel But Still No Scarlet Witch: Rise of the Whatever The Fuck really required? Will the movie fall apart without you? Come on, now.

A summary of the original Oldboy if you never saw it because you don’t know how to read: A guy is held prisoner in a hotel room for 15 years (20 in the remake). He is never told why he is there or who put him there. It turns out that people pay top dollar to have others held prisoner in this place, and that its existence is unknown to authorities. After being released, he tries to solve the mystery of why all of this happened, and the rest of the movie is about his journey towards the truth. Along the way, there’s a kick ass fight scene done in one continuous shot and a twist that I won’t spoil now (but will spoil later, because I can’t help myself).

I haven’t seen it in awhile, but the original Oldboy is fantastic, and you should go watch it (along with Sympathy for Mr. Vengeance and Sympathy for Lady Vengeance) if you haven’t already. Then you can come back and feel my pain.

The remake follows the basic outline of the plot and most of the details. At times, it’s one of those “Why did they even bother?” remakes. You know, where it’s basically a shot for shot recreation of the original film that just isn’t as interesting or entertaining. It’s kind of amusing since I haven’t seen the original movie in several years, yet this remake kept jogging my memory of scenes and situations from the original. In each instance, I remembered, “Oh yeah. This part was awesome in the original.” But watching this new one, I just had to yawn. Towards the end, as Sharlto Copley was walking Josh Brolin to the Big Reveal, I checked the running time to see how much was left.

Words only spoken when watching classic works of the cinematic arts.

By the way, it’s Teal & Orange central in this one. I tried to set up the screenshots in this review to alternate between the two schemes. It’s… it’s absolutely fascinating.

Oh, and did you see Lt. Daniels from The Wire up there? Of course not; you were too busy looking at a white girl’s ass. Shame on you. Anyway, uh… uh… what were we talking about, again?

Oh yeah, they redo the Streets of Rage fight from the original. Spike Lee decided to add in different fighting areas and waves of combatants, with the continuous tracking shot following Brolin down to each new level. You know, because it wasn’t already awesome, and we need to fuck it up. Apparently, the producers also joined in on the “fucking things up” party and introduced cuts into the sequence, thus making it not one continuous take like in the original. It’s also weaker since Brolin’s character development is (I presume) partially on the cutting room floor. The movie just isn’t paced that well, and his switch to ultraviolence (both here, as well as earlier when he trashes some high school football players) comes out of left field at times. They kind of montage over the last 15 years of his imprisonment, so we don’t get the full picture of his psychological descent. I don’t know what it is, exactly, but it’s just off. It’s not Brolin’s performance; I thought he did a great job here. I don’t know. I blame the producers, Barack Obama, and the guy from the old Showtime Rotissiere infomercials. It’s all their fault.

Just release the director’s cut, guys. I want to see it. I didn’t think this movie was amazing or anything, and it isn’t anywhere near the original, but there were enough good points in it that I’d like to see the finished product. As it is, the whole movie just feels neutered. I don’t even know why I watched it, honestly. Actually, I do: I have problems. But still, if you’re going to release something like this, just give me all you’ve got, guys. I can take it.

Anyway, it’s time for SPOILERS. I had some students complain when I stated that George Clooney died in Gravity as I started to note how the physics in his death scene defied mathematics. So yeah, stop reading if you don’t want to know about the “accidentally fucking your own daughter” twist. Oh wait.

I have to say that between Oldboy, the Oldboy remake, and The Samaritan, I’ve become an unwitting expert on the subject of daughterfucking. This is what all these years of film fandom have led me to. Sure, other films like Chinatown have featured characters that fucked their own daughters, but they knew what they were doing and liked it. Then you have characters like Mufasa in The Lion King, who fucked every girl in the pride as a matter of course, making it hard to single out his amorous advances towards Nala as having special significance. But in Oldboy, you have a guy who fucks his own daughter, likes it, then loses his mind after he finds out the truth. He can’t even hide behind the whole “I was drunk, tripped, and my erect penis landed in my daughter’s pussy” defense heard in trailer parks across this great nation. No, he has to live with himself.

From what I can recall, in the original, the guy went to a hypnotist to forget the truth in order to still be with her. The movie ended with a shot of his face as the two of them embraced, leaving it an open question as to whether or not the hypnosis worked. In the remake, they have the guy pay to have himself locked back up in the same hotel room he lived in for 20 years. He punishes himself for his sin, rather than attempt to live a lie. It’s an interesting twist that I thought worked pretty well, overall. It’s very hastily done and edited over, and probably made much more sense in the original cut, but I didn’t hate it or anything. It’s moments like that, where they twisted the original story, that worked the best in this film.

What didn’t work well were the endless “Sharlto Copley has wiretaps on everything” bits. Josh Brolin’s character starts sleeping with a girl who is really his daughter in a room somewhere. Cut to Sharlto and his ninja girlfriend watching it on his hidden cameras. At another point, Sharlto overhears Michael Imperioli’s voicemail message to Brolin in realtime and flips out over the usage of the word “whore” in reference to his sister. He’s one step ahead of everyone, has the power of the NSA in the palm of his hand, and his girlfriend likely has the ability to fire explosive benwa balls out of her vagina. Again, all of this may have made more sense in the longer cut, but as it is, there’s no indication that Sharlto’s minions have guided the two of them to that particular room or anything. It’s just presented as if he is an omniscient god made flesh. Hey, if you’re so smart, why can’t you dissolve this Teal & Orange color scheme? Riddle me that, man!

Also, in a film that features Josh Brolin’s ass, Sharlto Copley’s ass, and Elizabeth Olsen’s ass, why do we not see the ninja girlfriend’s ass? Did the producers cut that part out, Spike? Jesus Christ. These people are just out of fucking control.

I think we’re done here. So let’s close by quoting the following words of classic poetry:

To err is human, but to really fuck things up, you need Hollywood.