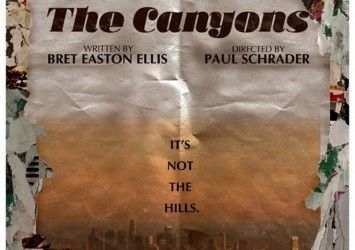 Every once in a while, a movie comes along that is so moving, so powerful, that it leaves you feeling inspired. This is not that movie. Directed by Paul Schrader (who wrote Raging Bull – seriously!), The Canyons is a movie that is so awful that I feel dumber for having watched it.

Maybe you haven’t heard of The Canyons. You’re not alone. It was released in August 2013 in a grand total of 9 theaters. It didn’t get much (positive) press during production, but was supposed to be Lindsay Lohan’s big comeback in Hollywood. To me, it seemed less like a comeback role, and more like a “You owe me a favor, Lindsay, and it’s time to pay up” role. And get this – Bret Easton Ellis wrote the script. That’s right! Legendary prick/sour grape enthusiast Bret Easton Ellis, author of Less than Zero, Rules of Attraction, and American Psycho, wrote The Canyons – a script so vapid and hacky that first-year film students probably use it as an example of what not to do.

The basic premise of The Canyons seems to be this: everyone in Hollywood is good-looking, but immoral. Intrigued? Let me stop you right there – you shouldn’t be.

A movie theater that closed rather than show The Canyons.

Lohan plays Tara, a sometimes actress who loves her phone and sounds like she gargles broken glass every morning. Tara lives with her boyfriend Christian, who is a creep/trust fund baby/movie producer. Christian is played by porn star and 2013’s “Cocksman of the Year” James Deen, appearing in his first mainstream movie. Deen is a little stiff (pardon the pun) in his delivery, but I cut him some slack because a) Bret Easton Ellis wrote a lot of terrible dialog, and b) Deen doesn’t do a whole lot of talking in his primary occupation, save for saying things like, “Did somebody order a pizza?”

As I mentioned, Christian is a creep. How so? Oh, I don’t know – maybe it’s that he invites random people from the internet over to his house to watch him bang Tara. (Side note: it took a whopping 14 minutes to see boobs AND full frontal dude-bits.) Or perhaps Christian is a creep because he cheats on Tara pretty frequently, all while freaking out at the idea that Tara could – GASP – be cheating on him! Bottom line, Christian is a dick. I know what you’re thinking: Bret Easton Ellis created yet another asshole character? Crazy, right? Christian is Rip from Less than Zero, Sean from Rules of Attraction, and Patrick Bateman from American Psycho, all rolled up into one big old douchebag. Write what you know, Bret! 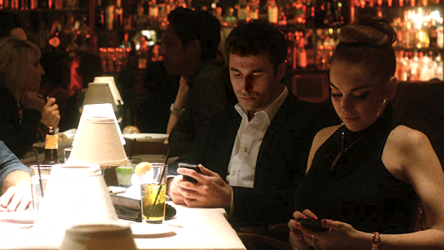 Christian is producing a movie, and has decided to cast his assistant Gina’s boyfriend, Ryan (Nolen Gerard Funk), as the lead. Gina (Amanda Brooks) and Ryan come across as two of the dullest people on Earth, except for one small detail – Ryan is sleeping with Tara! OMG! Turns out, Ryan and Tara dated previously, but it ended when Tara realized that dating a bartender/struggling actor was bad for her image. Now they’re back in the saddle and in love again. MEANWHILE – Christian is banging a yoga instructor/struggling actress named Cynthia, who happens to know Ryan from acting class! Man, small world! And what’s Gina doing during all of this? I don’t know; probably out buying cocaine for Christian. Confused? Here, I made a helpful diagram: 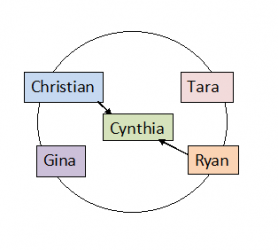 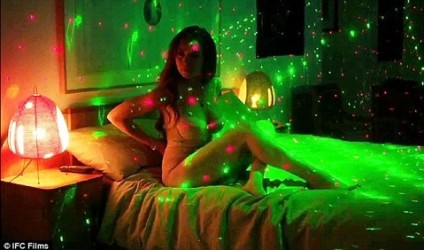 Before we start, would you mind turning on the mini-disco ball that I bought at Spencer’s?

As the movie progresses, Christian becomes increasingly jealous/crazy, and is determined to prove that Tara is cheating on him, and that Ryan is bisexual. Why? Shit, I don’t know; but Christian sets up the dumbest sting operation in history – one that involves Ryan either giving or receiving oral sex to/from another man. What will that accomplish? Search me. But Christian’s dastardly plot doesn’t end there – he ups the crazy ante by hacking Ryan’s bank account and his Facebook page. Cold-blooded.

Normally I wouldn’t spoil a movie, but I want to save you the trouble of watching this dumpster fire. So here goes: Ryan can’t stand the lies anymore, so he breaks the news to Gina that he loves Tara. Gina says ok, but vows to get him fired from the movie. (Did you forget they were making a movie? I did.) Overall, not the most painful breakup I’ve ever witnessed. Christian goes to see Cynthia, and is upset that she’s friends with Ryan, and that Ryan is sleeping with Tara, and oh no – Christian murders Cynthia. HUH? He wasn’t even really mad at Cynthia! Christian, you son of a bitch.

When Christian gets done murdering Cynthia for no good reason, he returns home to find Tara waiting in the foyer, bags packed. She is scared of Christian, you see, and she wants to leave him, but she wanted to make sure it was okay with him first. Girl, please. Take your shit and go before he gets home. Considering what a psycho Christian is, I was surprised that he was basically cool with Tara leaving. Wasn’t Tara the catalyst in this crazy murderous rampage? Ah, fuck it. Who cares! Tara can only leave on one condition, though – that she provide Christian an alibi for the time during which he took poor Cynthia on a trip to Stabby Town. Tara agrees to the terms, and is free to go. Then we fast-forward a bit and find that Tara is dating some new rich guy (surprise!) and she’s being questioned by a pretty nosy dinner guest about Christian, their break-up, and Cynthia’s murder. Mind your own business, lady! She isn’t just nosy, though; we learn that she’s trying to find out information for someone whom she calls from the ladies’ room. Is it Christian checking up to ensure that Tara hasn’t ratted him out? No, that would make too much sense. Instead, we find out that it’s Ryan! Ryan wants the info! Why would Ryan want the info? Good question – you see, oops the movie’s over. Seriously, that’s how it ends. We see Ryan on the phone, he looks directly into camera, and the credits roll.

This movie isn’t supposed to be funny, but it’s so awful that you can’t help but laugh. However, stripping away the bad acting, the atrocious dialog, and the ridiculous sex scenes left me with one lasting impression: how sorry I felt for Lindsay Lohan. The Canyons was never going to be her big comeback role; rather, it was a job she landed when very few people were interested in working with her. She can certainly act, and has been quite good in films like Mean Girls and A Prairie Home Companion, so here’s hoping that some better roles come her way. She deserves better than The Canyons. 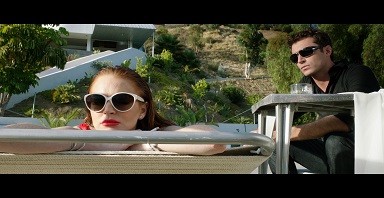