A while ago I made a pact with myself that I wouldn’t see movies that have posters on the side of buses. However, a drunken sexual misadventure at the last corporate team-building retreat meant I would have to keep a constant presence at the water-cooler to wash away the stain on my reputation. This movie seemed like an inevitable topic of conversation, so I spent some of hard-earned cash to do my homework, which I’ll now parlay into a full blown Transcendence review.

The conflict between generations has always amused me because it has a winner even before it begins. It always reduces itself to the older people trying to score as many points against the younger ones before their inevitable defeat. Kind of like a game of pinball.

Just what we need. A TED Talk asshole with unlimited power.

Just for the sake of argument, I’ll say that the hidden message of this movie is the conflict between generations. You see, “Generation Y” is establishing itself as the dominant demographic power, so this event is viewed by the older “Generation Z” and their “Boomer” masters as the end of human civilization through the irresponsible use of technology. Meanwhile, they all remain oblivious to the true face of evil: millennials.

Johnny Depp plays Will Caster, a character with a very original name. I guess the second choice was “Net Matrix” but they went with the first one. He is a fabulous, intelligent, talented You know what? He’s Johnny Depp if he was playing a computer scientist. He and his fellow AI researchers (including Morgan Freeman for narrative purposes) are on the verge of creating the first self-aware AI. Because of this an anti-technology terrorist organization emerges.

At first they were just putting smartphones into blenders and posting the clips on YouTube as a statement.  I guess the irony of this got lost on the way, or they also smashed the blenders and digital cameras with a rock or something. RIFT (as they are called) organize a synchronized attack on computer labs and AI researchers. Johnny Depp’s character is targeted by the worst terrorist in the group, who  fails to mortally wound Will with a gun at 9 feet. However, the other terrorists knew the assassin was nearsighted so they give him the “poisoned” bullets thus creating a convenient hole in the space/plot continuum, allowing Will’s wife to have enough time to put Will’s mind into a computer. 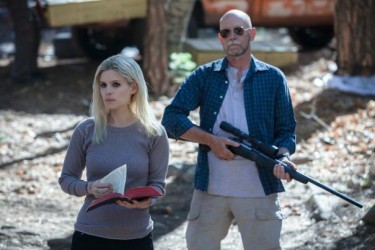 How do model hot survivalist cult members maintain their look on the go? Maybe it’s Maybelline.

Damn, I should have warned you that this review has spoilers in it so, if you haven’t seen a movie in the last 30 years, didn’t see the trailer or just have a two digit IQ, you should stop reading. After Will is shot, Evelyn casually walks into a high-security computer lab, steals a couple of hundred million worth of quantum processors by taking them from the server rack and putting them in her purse. She then takes Will to an abandoned warehouse, drills some nails into his head and attempts to copy his mind into the computer. Paul Bettany plays an older version of Millhouse from the Simpsons, a fellow nerd who is friend-zoned by both Will and his wife, and yet still helps them in their demented plan, only to realize the error of his ways after a few months of torture by the terrorists.

Maybe I’m just a party pooper, but if you copy your thoughts and memories to a computer, you wouldn’t save yourself. You would just get a digital copy of yourself. I guess it would have been really funny if computer-Will came online while organic-Will was still alive. Take it from me, if you want to live forever or you’re just scared of the cold touch of the abyss, then you need to save your neurons. What you want is to do is what Cain did in Robocop 2: have your brain removed from your frail carcass and have it transplanted into a monstrous, unstoppable machine with metallic claws, a shoulder cannon and a minigun attached to it’s right arm. It’s just common sense.

So organic-Will dies and his mind survives in the computer. The terrorists show up to stop them, but Evelyn gets computer-Will connected to the internet where he spreads like herpes at spring-break. It was my understanding that computer-Will could only exist because the huge amount of data that created his person was stored and managed by the high-end processors. However, when the baddies remove them, computer-Will is just as smart as he ever was. From this moment on the movie falls apart on every level so it starts getting good in that Battlefield Earth kind of way.

It seems that in the near future the anti-government right-wing lobby will reduce state intervention to a joke. The authorities are powerless to do anything about the situation. The terrorists appear to have more resources and are more organized than “the man,” as they show up to foil Evelyn’s plans before the Feds even get a clue. Hell, they even find computer-Will’s doom lair before the Feds do, though they are operating out of the woods.

Towards the end of the movie the two FBI agents sent to deal with this situation are discussing how to stop computer-Will in a bar, over a cold brewski. So a world-threatening almighty entity that was turning people into Borg drones is dealt with 6 jeeps full of hicks and a World War 2 field-artillery. I shit you not. The final showdown is between indestructible human drones and a couple of alcoholic, sister-banging rednecks with a field gun.

But I guess ducks will quack, dogs will bark and haters will hate. So it’s not my fault, it’s the Universe’s. What is really annoying about this movie is that it is entertaining in spite of/due to its horribleness. It’s amusing to see how people still believe that women and computers will destroy the world. What is really annoying is that this movie is aimed at the hipsters in the technology sector, the so called “techno-hipsters.” You see, the social elites of Generation X only wanted to get all the money in the world so they buy blow and snort it from a stripper’s tits. They also wanted to destroy communism but that was a way of achieving the first objective.

The social elites of Generation Y are the computer nerds, the Zuckerbergs, the guys that work for Google, Apple or the video-game industry. As elites go, they are the most opinionated of them all. And this story is their intellectual merry-go-round. 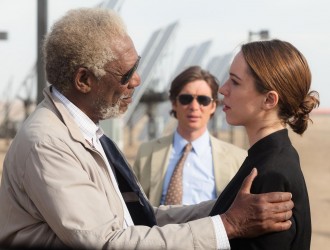 Look, this film isn’t going to be the career breakthrough you’re hoping for but keep at it. I was on The Electric Company until I was 58.

I failed to mention that this movie is a love story. However, the film’s motion of love is derived from the ascetic, hipster, romantic version of love. Where couples don’t have worldly problems, where they are only in love with the other person’s intellect and / or personality, where sexual pleasure is gross and primitive and where watching someone for 8 hours while he or she is sleeping is considered cute. All the two protagonists want is to be together, in spite of petty obstacles like society and traditional values such as mortality.

They also wanted to heal the world and atone for their primitive predecessor’s mistakes because why the fuck not? Finding projects to finish together seems the logical way to go when you don’t feel any emotions towards the person you supposedly love.

This movie also touches on the notion that people will always be scared of technology and that this fear is the biggest problem we, as a species, face. This whole notion is probably born out of frustration that the new smartphones aren’t selling as fast as techno-hipsters want them to. Hey, guys, we’re doing our best. We just don’t have enough money to buy overpriced, shiny phones, with fruit on them, because people like you keep giving our jobs to robots and collections of zeros and ones. And yes, people will fear technology. They fear atomic bombs when the launch codes are in the hands of womanizing amphetamine addicts. We’re afraid of meds when they are made by companies that are constantly on trial for seedy marketing campaigns. We are afraid of computers recording our personal lives. We are afraid of social networks that create patterns just so we are bombarded with commercials for shit we don’t need. You see, it’s not the technology that scares us, it’s the pricks that use it for their own personal gains.

As acting goes I won’t make judgments because I don’t want my shitty car to get vandalized again. However, Johnny Depp plays the hipster Jesus. He’s charming, all-mighty, all-wise and restless in his quest. He gives sight to the blind, life to the dead, legs to the legless, and also turns all of them into his puppets. He foresees his own demise and does little to stop it. He also forgives the monkeys that come to put him to rest. Any of this sounds familiar? His “seed” cleans the planet of pollution and he is eventually destroyed by Evelyn’s blood in a very weird menstrual reference that would creep out Freud.

Strangely, I was kind of rooting for him at the end of the movie. But that’s just because I hate my fellow man. And you would too, if you were a broke, fat, lazy bastard whose girlfriend looks like Arnold Schwarzenegger in drag. Remember that movie? He pretends he’s a woman so he could give birth to a child. At the end, his belly gets cut open and they lift a baby from it just 4 inches away from his Austrian cock. What a happy ending! I wonder how that person would turn out as an adult. I’m picturing him living in a house in a small town with a huge hole in the back room, where he keeps the victims and forces them to use skin cream before he makes a lady-suit out of them. But I digress.

I’m still puzzled by one aspect. If computer-Will used solar panels to generate energy during the day, where did he get his power at night? Did he stitch a couple thousand car batteries together? Isn’t that a bit primitive?