Home / Reviews / Movies / For Whom The Bell Saves: 10 Saved By The Bell Facts I Learned From the Lifetime Movie.

For Whom The Bell Saves: 10 Saved By The Bell Facts I Learned From the Lifetime Movie.

Lifetime just aired a movie called  The Unauthorized Saved By The Bell Story, and I couldn’t resist watching it. But before we eventually get to that, we have to examine the life and times of Dustin Diamond, the architect of this tell-all 90 minute masterpiece of disaster.

The seeds of nerd-abuse were sown so deeply into the fertile childhood of Dustin Diamond, it’s actually pretty surprising he didn’t eventually become a cop. On top of his genetic lottery ticket being scratched to reveal only Gilligans, he had to attend a fake high school where a brick-phoned phony and an acid washed peacock-man with a permed mullet actually thought he was the embarrassment.

Saved By The Bell was a staple of my generation’s childhood, and as a twelve year old, I analyzed it every Saturday with strained studiousness. I nervously wondered what high school would be like, so I made sure to learn everything I could about Bayside. After watching enough seasons, I thought I had a pretty good idea of what to expect at my Pubescent Institute of Cruelty. I was ready! Then, on the first day of high school, I watched two girls beat the ever-living shit out of each other while everyone cheered. There was blood, I saw tits, and one girl’s weave was ripped out. This cool guy even picked it up and swung it around like a helicopter while everyone laughed. I was terrified. Fuck, all those wasted Saturday mornings! I remembered thinking. Zack and Slater did not prepare me for this!

Later in high school, I eventually figured things out. I was nowhere near cool, but I had lots of friends, got laid regularly, and experimented with drugs and alcohol without ruining my future. That’s pretty much the best you can do during those years. I remember waking up one morning and seeing Screech on Saved By The Bell: The New Class. While the rest of the original cast moved on, sort of, Screech seemed to remain in an arrested state of nerdvana.

Every goofy flail of the arms, every misinterpreted social situation, every wacky facial expression was a brick in the nerd prison he was slowly building around himself. He couldn’t escape. He was once funny according to children, but those children had grown up, and now they were seeing him as kind of a sad sack.

I didn’t see it, but I imagine he just wrote Saved By The Bell on his dick and then just slowly milked it until the tape ran out.

Then, he fought some other famous nerd in Celebrity Boxing because we are a bunch of bored, blood-thirsty monkeys living on a polluted space rock at the edge of the galaxy.

We demand nerd on nerd violence

I think he did Celebrity Fit Club after that, which I didn’t even know was a show until doing Screech research last Saturday night (new personal low!). Anyway, he was a real jerk, but he said the thing was scripted, and I kind of believe him.

Meanwhile, the rest of the cast decided to have a reunion, and guess who they didn’t invite, the one guy still in character. I mean, one of the major flaws of Saved By The Bell was that the cool kids were hanging out with a nerd, installing cruel hope into dragon-drawing P.E dreaders everywhere. In real life, the outcast never gets invited. I guess art eventually imitates life, no matter how shitty the art. You can’t really blame the cast; there is nothing more insufferable than an angry nerd. But in Screech’s defense, nerd prison probably unleashes uncontrollable waves of spaz-rage that act as people repellent. 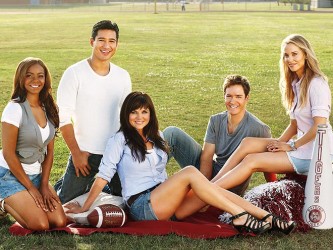 Surprisingly not pictured: The kid they made fun of during fake high school.

But I don’t want to nerd-generalize, Urkel never had all these problems; he’s got a pretty great acting career going, especially as Dr. Terry McCormick in Mega Shark Vs. Crocosaurus. 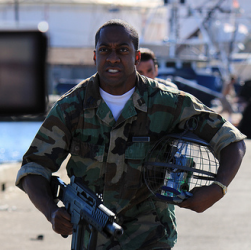 “Did I do that, MOTHERFUCKER?!”

Anyway, Screech was tired of being Screech so he wrote a book about that time he was Screech for the last two decades, and then Lifetime decided that it should be turned into a movie, and Screech became the executive producer and he cast another little kid as Screech playing Screech. Follow me down the rabbit hole of Screeches.

You know, if I had a race horse, I’d name it Saved By the Bell so when it dies, Dustin Diamond will suddenly show up and start beating the shit out of it.

Anyway, I watched this movie because SBTB still tugs at my heartstrings for reasons I cannot understand, and I wanted to find out the real story.

Without further ado, here are 10 interesting SBTB facts I learned from watching The Unauthorized Saved By The Bell Story:

1.) The show was canceled a shit ton of times, but for some reason, it just wouldn’t die. It was like a plastic zombie in a loud-colored windbreaker that just kept coming and coming until every kid in America had a Slater Trapper Keeper with a Buddy Band around it.

2.) Jesse and Kelly auditioned for the same part, but they liked the two girls so much, they decided to keep both of them, just like Lo Pan did in Big Trouble in Little China with Miao Yin and Gracie Law.

“Thanks for keeping BOTH babes!”

4.) Zack and Lisa had a real life thing going on, but she was a Jehovah Witness, so they had to be secret lovers. Zack eventually gave up on it because he got tired of sneaking around and didn’t want to spend the rest of his life knocking on doors or whatever you have to do to prove you’re worthy of a Jehovah Witness girl. Also, Lisa and Kelly had some tension because Kelly was dating Zack in the show, but Lisa and Zack were seeing each other in real life, but the writers didn’t care. They just write in parts where kids make out and stuff so that we can watch. So Hot!

5.) Critics hated this show, universally. The kids would read the strong, rock-hard takes of the TV critics and then get very bummed out because they thought they were supposed to be making The Wire or something.

Slater ripping up an article that criticized his acting abilities

6.) Zack’s dad was Dutch, his mom was part Indonesian, and he was the first member of his family to be born in America. He was only pretending to be the all-American boy that the public demanded.

7.) Jesse was old as shit. At one point, she had graduated high school in real life but was still playing a sophomore. She was really mature and smart, so she proved this by making Showgirls. Anyway, it was her idea for the show to tackle teen turmoil. She was responsible for the drunk driving and caffeine pill shows. She wouldn’t stop whining, so the comb-over dude wrote some really special episodes!

Jesse, pictured above, was so excited she got to pretend to be so excited.

8.) Screech got really angry about always being a dork,; consequently, he started drinking and learning karate. Sometimes he did both of these things at once. 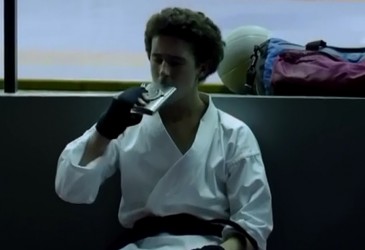 9.) Screech’s first kiss in real life was when he planted one on Tori Spelling in the Max; He also had a lot of weird fantasies that involved him wearing a blond wig being super buff.

10.) Screech also made this badass Tyler Durden-esque Asian friend who gave him alcohol and weed. But it became clear he was only his friend to try and latch on to Screech’s success. Eventually he tried to blackmail Screech into getting the part of Tori’s ex-boyfriend. Yeah, that would have surely launched his acting career.

“Drink this and you can be cool…like me!”

Screech says at the end of the movie that there is a little bit of Screech in everyone, and that’s just alright with him. I’m glad he felt the need to let us know he was finally at peace with the character that has plagued him for his entire life. We were all very worried. I guess what I learned from viewing all of this in its entirety is that no one ever truly gets over being a nerd. Getting bullied and disrespected can fuck you up, forever. Zack, at the end of the movie, apologizes to Screech for being a jerk. He says, “Sorry man, it was just dumb kid stuff.” To people like Zack, it’s an “oops my bad, sorry bro” minor fuckup on the way to personal growth, but try explaining that to Screech’s taint, which conceals the painful scars of a thousand atomic wedgies.