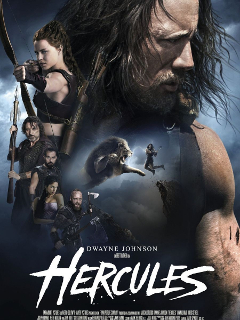 This is a movie where The Rock performs a pro-wrestling move on a horse.

Don’t believe me? Check out these screenshots!

I could just end the review right there, but I’m not sure that a series of four screenshots counts as a critique in the academic sense. Thus, I’ll be launching into a rambling 1000+ word discussion of American foreign policy after a half-assed attempt at a plot summary. No judgment, please. This is what the Internet was made for.

Hercules is a film about “the real story of Hercules”. Here, Hercules is not the son of Zeus, but a mercenary with good PR. He used to be a great military leader in Athens, but was accused of murdering his wife and children and was exiled. He already performed his 12 Labors before the start of the film, and his legend has spread across the land. In other words, he’s a heroic counterpart to Star Trek: Nemesis‘ Shinzon: he accomplished his main goals before the film even started, and now he’s just going to hang out for 90 minutes. Great storytelling here.

Hercules is also a film by Brett Ratner. Again, I could just end the review right there, but I’ll keep typing. We’re a long way from Rush Hour 2, folks. Hell, we’re a long way from After the Sunset. That may, in fact, be the first time anyone has ever typed that sentence. Anyway, it’s Brett Ratner attempting to do a light-hearted take on a Ridley Scott style historical film. Somehow, Hollywood can find the money to fund this while a sequel to Dredd can’t get off the ground. Welcome to the New American Century.

War. War never changes. Hercules tells the tale of a war based on lies waged for money and power. In other words, it tells the tale of a war. Hercules is hired by a king to protect the land from an evil warlord. After defeating the warlord two-thirds of the way through the movie, it turns out that the king manufactured the threat as a pretense to steal land and rule all of Thrace under one banner. I’m not sure why the filmmakers seem to think that this is a twist; the last decade or so of American foreign policy has cemented the idea that wars are, more often than not, based on lies firmly in the American psyche. It would be more of a twist to not feature such cynicism at this point.

Anyway, we’re back in that “realistic” version of Ancient Greece, where the gods don’t exist, centaurs and hydras only reside in legends, and the Christian conception of Heaven and Hell is referenced multiple times. This is the real story, alright. I’m sure every History teacher out there that watched this movie was 100% satisfied, just as they were with that King Arthur movie from a decade ago. Historically inaccurate “realism” pleases everybody!

You know a movie is bad when you have to take a break and play the classic NES game Battle of Olympus for awhile just to calm down. In Hercules‘ defense, it’s not mind-rapingly horrible or anything. It’s just so fucking boring. The real story is boring, guys. That’s why they came up with the legend in the first place! It’s also why the legend survives a couple of millenia later and the real story does not. Nobody fucking cares!

So Hercules and friends fall for the yellowcake gag and inadvertently get a lot of innocent people killed. The king teams up with the ruler of Athens, and together they reveal their master plan to take over all of Greece. Also, it turns out that the ruler of Athens killed Hercules’ wife and children because he felt threatened by Hercules’ fame. I guess child murder is bad and all, but that wasn’t what bothered me during this scene. Instead, I found myself wondering: why did the designers of Battle of Olympus make the first enemies you fight in the game, those little worm things, impossible to hit even when you’re ducking? Why do you have to wait for them to jump? What’s up with that? Also, are they going to make a sequel where Hercules fights ISIS?

I can’t stress enough how ridiculous the entire storyline of this movie is. Hercules is initially approached by the evil king’s daughter, and is tasked with helping them defeat the evil warlord encroaching on their lands. Later, it is revealed that the king poisoned her husband, the former king. Her son is the legitimate heir to the throne, and she is just waiting for her father to die and balance to be restored to the Force.

Hercules and friends ride to a nearby town to protect it from the warlord, but they find that everyone was massacred a week ago. This is due to bad intelligence from a duplicitous scout. A trap is sprung, and a bunch of guys in green warpaint emerge out of the ground and attack. It is implied that these gentlemen are working for the warlord, but since the warlord is later revealed to be innocent, where, exactly, do these guys’ allegiances lie?

Anyway, Hercules later faces down the warlord and subdues him with the hilarious horse-throwing maneuver featured earlier. Oh yeah, the duplicitous scout ends up having been in the employ of the warlord all along. What a twist! The warlord tells Hercules that he was fighting on the wrong side, for he was defending his people from the evil king. It is then that the king offers Hercules the chance to command his army. Hercules says no, and the king accepts that and pays him. It sounds like an amicable parting, but Hercules needs to save the kingdom, so cue the obligatory finale.

In the leadup to the finale, the ruler of Athens shows up and reveals his master plan, as I stated earlier. The ruler of Athens was apparently involved in the plot from the beginning; thus, he must have known that the evil king was thinking of hiring Hercules to clear out the resistance. This is interesting because in the midst of his monologue, he notes that he felt threatened by Hercules because Hercules couldn’t be bought.

To reiterate, the evil king hired Hercules as a mercenary under the assumption that he would look the other way upon receiving payment, even though he was working with a guy who hated and feared Hercules because of his inability to be swayed by money. Somebody made a movie out of this script without noticing this. I really don’t know what to say.

Anyway, let’s take a moment to admire The Rock’s breasts. I couldn’t take my eyes off of them for the entirety of the scene featured above. They’re magnificent. For some reason, though, they have him wearing a weird grey tunic for most of the film; this clothing article obscures their majesty for no apparent reason. What is going on with Hollywood? I mean, the female Amazonian sidekick shows more skin than The Rock during the battle scenes! Just shameful.

In conclusion, Battle of Olympus is still a great game, but those damned birds in Phthia can go take a leap.