Jingle All The Way 2 Review 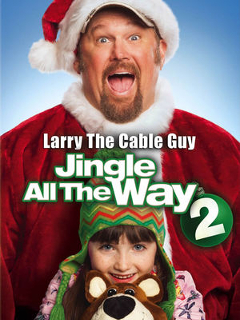 Jingle All The Way 2

No, this is real!

Is the number of times Larry the Cable Guy talks about shitting himself a positive integer?

Yes. Oh God. What has my life come to?

Jingle All The Way 2, apparently.

So they made a sequel to Jingle All The Way. That’s not so bad. At least they didn’t remake Commando!

Yeah, it’s these small victories that really make all the difference!

This film is truly amazing, though. Not only did I have to watch it five minutes at a time over the course of several days, but it may be the only movie ever made that makes the viewer long for an appearance by Sinbad. Oh, I was so lost without the comedic stylings of that 90s icon. We are weaker as a country without his wisdom to guide us.

No Sinbad. No Arnold. No Phil Hartman. In their place, we have one man. One man brave enough to support an entire DTV sequel all by himself. You know him, you love him: Larry the Cable Guy!

I’m not that familiar with Mr. the Cable Guy myself, but I presume somebody out there must know who he is. I mean, his name is the sole credit on the front cover. They wouldn’t have done that if he was a nobody. This wasn’t made by some fly-by-night outfit. No, this was made by WWE Films! If that isn’t a Seal of Quality, I don’t know what is! 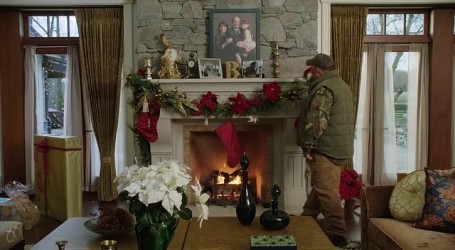 Christ. So what’s this thing about, anyway?

Larry, The Guy Who Fixes Your Wife’s Cable plays a divorced father named Larry. His wife has remarried and her husband is ultra-rich. Larry lives in a trailer and has no visible means of support. It is stated that he works “part-time” in the “trucking business”, but who knows what that entails? Still, Larry is certainly the more relatable character in that he’s a semi-employed failureman who can easily pass as a homeless person when the need arises. He spends at least half of his time at a local diner pretending to not look at the waitress’ tits while he looks at the waitress’ tits. Really, he is America. He is us. If we hate him, it is because we hate ourselves.

Larry gets the idea that his daughter wants a new Harrison Bear for Christmas and embarks on a quest to find one in the few remaining days left. His wife’s new husband, Victor, pays an underling to buy up all of the toys to prevent Larry from getting one for his daughter. Remember: it’s not enough to win. Somebody else has to lose.

It’s like when they burned down a village to save it in Vietnam. Sometimes you need to hoard the Freedom so you can give it back at the right time!

This movie is Nixon bombing Cambodia all over again. While it’s completely unnecessary and horrifying, there’s a certain demented genius to it all. It’s almost as if this film was made to prove that there really is no limit to what RedBox will carry. There is no bottom. They have no shame. And neither do I. 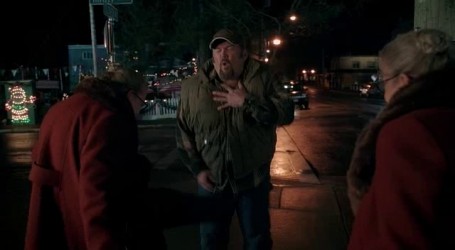 Larry gets kicked in the gonads, huh?

Yeah, it’s just that kind of movie. He also gets zapped with electricity, shows his underwear-clad ass after his Santa pants are ripped, and gets flattened by a trailerful of melted snow. It’s high-brow entertainment, in the sense of the “Hi Brow” bar on Foothill Boulevard in Pomona, CA. By the way, according to my parents, that fine establishment was featured on the television show COPS once. It’s always great when local businesses hit the big time, though I don’t know why they don’t feature places I’ve actually entered. I guess the denizens of Trader Joe’s avoid mixing alcohol with methamphetamine.

They also avoid getting kicked in the genitals by old women. Unless they’re into that. WE CANNOT JUDGE.

Bizarrely enough, this movie actually works better without the Jingle All The Way plot. They don’t even get to the “mad dash for the toy of the season” bit until 25 minutes in. From there, the search is spread over several days, as Larry lacks the motivation for one single crazy day. I’m not sure why they even called this Jingle All The Way 2. Turboman is nowhere to be found. Does Jingle All The Way really have that much name recognition outside of Arnold fans? I’m sure they’ll be showing their work shortly. They’ll demonstrate that the profit function is maximized with the inclusion of the name while forgetting to distribute a minus sign at some point. All I want to know is: how do you create a mathematical model that includes Larry’s Ass?

As Simon Gruber once said, “That was… unpleasant.”

I don’t get why his character’s wife divorced him, really. I mean, he’s overweight, underemployed, and confused by un-American food. The film concludes with Larry and Victor having a post-reconciliation discussion about where to go for Christmas Dinner. Victor rattles off fancy things like Persian and Mediterranean, while Larry sticks to all-American classics like Chinese food. What wife wouldn’t love a guy who suggests sloppy joes for Christmas Dinner? And he shits himself, too! If he’s not a catch, then who is?

Modern America is defined by unreasonable demands. Going through life without shitting your pants is this generation’s version of the trenches of World War I. Perhaps Jingle All The Way 2 is really an adaptation of the Book of Job? 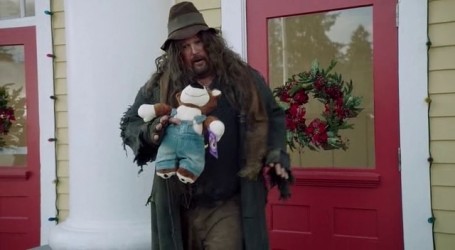 Larry certainly endures much in his journey. For instance, a toy salesman wishes him a Merry Christmas, a Happy Hanukkah, a Happy Kwanzaa, and a Happy Winter Solstice. How can one man have this much happiness? If any one of these holidays is less than stellar, he’ll feel like a failure.

Larry dresses up as a homeless person in order to get a Harrison Bear from the local shelter. On the way in, he runs into an ex-girlfriend who thinks he really is homeless. She forces him to accept 20 dollars for help. Larry exclaims afterward, “20 bucks? I’m in the wrong business!” It’s official, America: panhandling is more lucrative than part-time employment these days. Don’t worry, though: Larry promptly puts the 20 dollars into the donation box at the shelter. He’s a good guy at heart. He doesn’t even mention putting the money in the donation box. He doesn’t need to tell people about his good deeds to get a warm feeling. He probably gets enough warm feelings whenever he pees his pants. 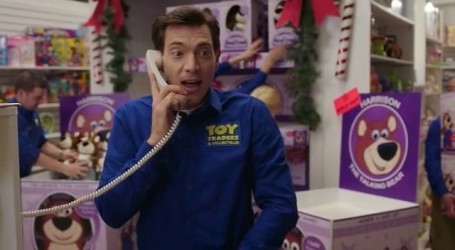 This review is really getting me into the Christmas spirit!

Really, though, I’m glad I finally finished this movie. Now I can finally watch Asteroid vs. Earth starring Tia Carrere and Robert Davi! I’m watching the shit out of that in celebration. Our long national nightmare is over.

But did this movie teach you any important life lessons?

Well, I learned that if you have your friend paint glue on your ass so that you can ride a mechanical bull longer than usual, your pants will rip when you are inevitably thrown off of it. I also learned that rich guys aren’t real men, because they are disgusted by the sight of a freshly-caught trout. Finally, I learned that plugging a two-prong plug without a ground into a hastily-constructed Christmas light display powered by used car parts will cause you to be launched 30 feet backwards amid a shower of sparks. No math education could have prepared me for that revelation! 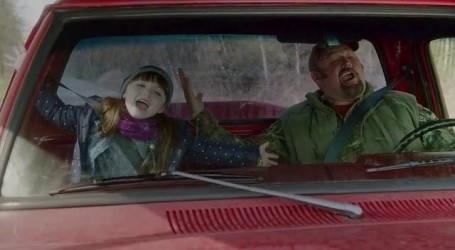 It’s America, alright. Fat white men living in trailers decry government handouts while driving on public roads. Purchases of consumer goods are conflated with love. The rich harass the poor because they can. Grown men shit their pants with impunity. What can I say? It’s a madhouse out there, and Jingle All The Way 2 captures the mood perfectly.

Oh yeah, Larry the Cable Guy gets bukkaked by a Christmas tree flocking machine at one point. Happy Holidays!