Is this film worth my time? Unless youre a Johnny Depp fan, theres nothing Black Mass does that wasn’t covered with more life and color by The Departed and The Town. Black Mass is a grim, gray gangster film lacking in any glamour.

Who is this film perfect for? Enthusiasts of Southie crime films looking for a filler film, people who want to see Johnny Depp trying to act. 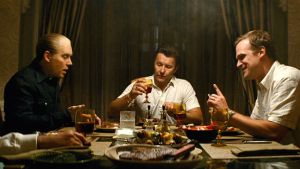 Plot Summary: For Southie mob lord Whitey Bulger, snitching is just another tactic for taking control of crime in Boston. And the agents of the FBI are just one more gang of mooks to be manipulated.

Gangster films are a pageant of the state, an affirmation of the police order which governs America. Consider the formula of the gangster film: an alternate government is presented (the gang, the mafia)- a capitalist hierarchy which governs a layer of society according to certain narratives of honor and profit. The alternative state is initially presented within that ersatz-states narrative: glamorous, wealthy, looking out for the neighborhood/ethnicity. Then, that myth is systematically deconstructed by showing how the organization is full of psychopaths and snitches. The audience is taught why they should fear and revile the alternate state. Finally, the alternate state is dismantled by stern lawmen, the leaders of the alternate state are killed or jailed, and somehow everything is put right in the social order.

Breaking that formula is one of the things that made the ending of The Sopranos so brilliant. In reality, regardless of arrests or killings, crime keeps going along to match the demand for drugs, sex, and violence. It may be a new gang or syndicate, but the vacuum fills.

Black Mass is closer to the reality of crime in North America: that federal law enforcement agencies dont fight crime so much as they manage the distribution and shape of organized crime. From the 1940s war time collaboration with Luciano’s mafia to today’s Operation Fast and Furious (or yesterdays training of the Zetas cartel), organized crime has always developed according to the preferences of the elite. Whitey Bulger was not doing anything different from the business practices of Nucky Johnson or Lucky Luciano. But Black Mass confirms to the telling as the FBI would have it: it was just one crooked agent who became corrupted, nothing more. If you believe that, I have a Jai Alai court to sell you.

So Is This Johnny Depps Comeback?

Its a reminder that Johnny Depp is able to act, and act with much nuance, but its not an Oscar worthy performance. As portrayed by Depp with the help of ample prosthetics, Bulger is a raspy, reptilian creature, full of icy rage. Its hard to imagine such a calculating being ever being a leader, or anybody would trust. Mostly he just gets his way by scaring the beejeezus out of everybody around him. Hes also propped up by the bonds of the Boston Irish- his brother Billy (Ubiquitous Cumberbatch) and FBI agent John Connolly. There’s some attempt to humanize him by showing the gradual unraveling of Whiteys social anchors- losing his son, his mother- but it doesnt carry over, due to the coldness of Depp’s performance. It does work to build some wonderfully suspenseful scenes, along the lines of Joe Pesci’s performance in Goodfellas. But that tension is not sustained, and the film doesn’t climax so much as it merely concludes.

Sailing and sinking on a Ship of Rats

Black Mass fails because it adheres to the general conventions and tropes of the genre without either delivering on the conventional appeals of the genre or making any effective subversion or divergence from the formula. We get the standard beats: the recruitment of the young gangster character, the portrayal of the bar scene, even the trip down to the Caribbean (Colombia or Florida or Cuba, all mobster end up trying for side action in the tropics). But we dont get any excitement, any privilege. There’s nothing appealing about the lives of the Irish mob. And theres no relationships or bonds that we are made to care about. And unlike Gomorrah, to name one that counters the genre, or The Departed, which uses the genre to speak about the broader nature of society, Black Mass doesn’t go off of the standard formula. Black Mass comes close when it portrays the psychic losses of Bulger loyalists, as friends and family meet unmarked graves. But there’s really not enough here to either covet or revile for this to be anything more than a middling mobster movie.