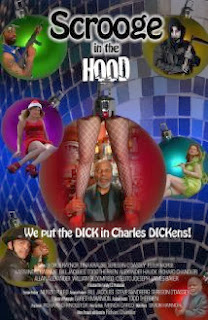 The Jewish Mafia tries to move in on Scrooge’s ‘Ho business.

The only thing wrong with this Christmas film, other than the acting, production, direction, sets, editing, cinematography and writing, was that it was an incredible 1hr. 23 minutes long. Scrooge In The Hood, a.k.a Silent Night, Dead Night is yet another obscure rendition of the Dickens classic

Tagline: We Put The Dick In Charles Dickens

With a tagline like that, its got to be good, right? Scrooge In The Hood follows the Dickens book, only this time it is the Jewish Mafia trying to move in on Scrooge’s Whore Business. Scrooge is still visited by the 4 Ghosts who try to convince him to change his greedy and impersonal ways, but that is where any resemblance to the classic Scrooge story ends.

In many ways, this Indie Film was the perfect Christmas movie. Like The Holy Bible, this movie was filled to the brim with sex, horrible violence, slavery (women) and the mistreatment, torture and mutilation of your fellow humans, especially women.

Scrooge In The Hood was laced with gangsta-grade profanity, prostitutes, violence, drug and alcohol abuse, and bodily mutilation. There was even a meshuganah Jewish Mother who was yammering Yiddish while she was beating her Jewish Mafia son over the head with a wooden spoon.

There were no sets, all of the scenes obviously were filmed at the actors houses, basements or cheap hotel rooms. There was no pretense of actual acting, the characters just woodenly read their lines off the cue cards. There were a couple of funny lines: Boy, shut your mouth before I pimp-slap your ass back into your mama’s womb, but for the most part this movie was drudgery to watch. Seregon O’Dassey was pretty hilarious as the drunken, Irish Ghost of Christmas Past, but the other ghosts were dreadful.

There is no way I can recommended investing an hour and a half of your life on this one.

1.5/10.0 With the Goatesians A Christmas Carol rating of Avoid.