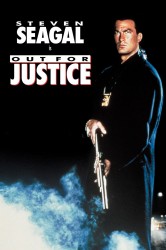 He’s a cop. It’s a dirty job… but somebody’s got to take out the garbage.

Unlike, say, Hard to Kill, where Seagal seeks revenge for the murder of his wife, Out for Justice adopts the traditional 80s action premise where men fight and die for other men. After all, Gino Felino (Seagal) seems far more concerned with finding the man who killed his buddy than he is with saving his crumbling marriage. He also has a proclivity for punching mens testicles. Generally speaking, its not above Seagal to attack the groin of another man in an effort to subdue him; this is a reoccurring theme in all of his films, like bar fights and tight jeans. In Out for Justice, however, we see Ginos hands and feet dive into so many crotches that one cant help but wonder if perhaps hes doing it for other reasons. If youre not convinced, his sleeveless, button-up v-neck vest will surely have you swinging both ways within the first fifteen minutes, particularly when its coupled with an impeccably stiff beret. At one point a prostitute asks Gino if he wants to fuck and he responds with an embarrassed, blushful chuckle. Also, the only boobies we get to see belong to a woman in the sprawl of rigor mortis.

Ultimately its the fight between Gino and Richie Madano (William Forsythe) that presents undeniable proof that this is indeed Seagals gayest film. In fact, they dont even attempt to disguise the kinky role-play thats about to unfold. Prior to the showdown, Richie emerges from a bathroom holding a gun to his own head.

Richie: What are you gonna do? You gonna arrest me? Huh? Im out of bullets!

Gino (dropping his own gun, which may as well have been his pants): Thats a shame, because those bullets couldve saved you a lot of pain.

What happens next should surely be considered among the most homoerotic fight scenes in 80s action history. Were treated to a raunchy, five minute man-on-man S&M game that achieves a level of bloody perversion that would leave even Van Damme cringing. An array of toys are used throughout the session, including a butcher knife, a frying pan, a giant pepper grinder, and a corkscrew, all of which are applied to various parts of Richies body. Holy shit, you simply have to see it to believe it.

I notched off 22 gratifying corpses, which puts the movie on par with the three that came before it in terms of murder. What really makes Out for Justice shine above the others is the sheer number of savage ass-thrashings that Seagal distributes to various guinea slime. Clavicles are snapped like twigs, wrists are contorted, heads are bludgeoned, arms are reduced to puzzles of bone, and Seagal kicks a man so hard into a brick wall that he very well couldve died. Wait, of course he died, so lets put the final tally at 23.

If by bad you mean badass, then its pretty bad. Next to Under Siege, this has to be considered the best Seagal flick in the catalogue. The action is top-notch and the beatdowns are of the highest caliber, especially the butcher shop brawl. My main problem is that while the film is only 91 minutes long, Seagals frightfully unbelievable Italian accent and cadaverous acting make it seem well over two hours. It doesnt help that much of the violence is saved for the last half so were forced to listen to Ginos long tirades about da neighbwahood and how hes fookin oopset becwause his bess frund Bobby Lupo diedah. Its fucking dreadful funny for ten minutes, yes, but dont insult me. Most of the dialogue is understandably atrocious, the deliveries are shocking throughout, and every possible Guido cliché is thoroughly exhausted. While it provides several unintentionally hilarious moments, the whole Brooklyn wiseguy sentiment shifts from amusing to unbearable so quickly because Seagal and director, John Flynn, somehow thought they were remaking The Godfather rather than a mindless action romp. As a result, Seagal is forced to act for long periods without hurting anyone. Not a good idea.

Its not possible to convey how bad Out for Justice is without mentioning William Forsythe, who is so greasy his mustache looks like a giant, glistening leech. While Seagal probes us with the wooden end of the acting stick, Forsythe rants and raves to the point where they probably shouldve just gone ahead and cast Jack Palance for the role. At the center of the movie is Forsythes character, Richie, a mid-level mobster who drives around in a humongous white Lincoln smoking crack and yelling at his posse. After murdering Bobby Lupo (Ginos buddy), Richie hits the road to settle various scores, buy deli meat, shoot John Leguizamo, and find more crack. Gino sets out for revenge by asking the Captain for an unmarked car and a shotgun, then proceeds to drive around looking for Richie. The mob, realizing that Richie has become somewhat of a loose cannon, sends out their own goons to drive around and join the hunt. Literally the first fucking half of the movie is spent showing people driving around!! Theres so much driving, in fact, that not one, but two montages are employed to speed things up. In the end, though, any grievances should rightfully be cast to the wind when Gino pins a mans arm to the wall with a meat cleaver.

Gino: Me? I cant believe you can still eat with that mouth.

This might be the most left-wing of the pre-On Deadly Ground Seagal films. He shows his animal rights activist side in a scene where a man driving in front of him suddenly throws a puppy from the window. Gino locks the brakes, picks up the puppy, and names it Coraggio. I know, right? Despite his alleged real life bigamy, Seagal also shows a soft spot for the womenfolk when he clobbers the shit out of the films only black guy an abusive pimp. But make no mistake, our beloved Gino is no racist, he speaks three languages and cares about his multicultural community. On that note, theres plenty of predictable and stereotypical neighborhood mob politics to go around. Gino always wanted to be a gangster but because his father was a hard-working Italian immigrant, he wound up on the force, etc. His fellow cops cant be trusted because theyre obviously in cahoots with the mob, etc. Other than that its pretty standard 80s action-style rogue cop gets bad guy because the Captain is old and stupid.

Gino plunges a corkscrew into Richies forehead, killing him instantly. Then he shoots Richies corpse three times, killing it instantly. Also worth noting is the final shootout where he shotguns a mans leg in half and it looks fairly realistic.

No, but Gino confronts the puppy-dumper, grabs him, turns him around, bends him over, and kicks him in the nuts from behind.

To hell with your family just be nice to animals, hookers, and the Bobby Lupos of the world.