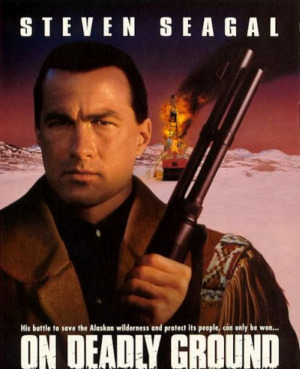 His battle to save the Alaskan wilderness and protect its people can only be won… On Deadly Ground.

It takes a genuine moment of scrutiny to unravel Seagals latent and complicated homosexuality. Erich and I have been at slight odds over the years on the subject, yet I think we can both agree that On Deadly Ground is Steven’s directorial tribute to 80s action. The film was released in 1994 but make no mistake, despite its renegade reformist agenda, this is 80s action through and through, the final languid gasp of an all but dead genre. Seagals obsession with testicles has never been more fervid; he kicks, punches, prods, and shoots no less than five pair throughout the movie. After the requisite bar fight, Seagal challenges a mouthy oil worker to a depraved game of hand-slap during which he belittles the poor guy, questions the legitimacy of his big balls, and then sadistically punches them. Lets face it, the dude prefers to be physical with other men rather than shoot them outright. Furthermore, not once does he show any interest in the Eskimo chiefs daughter who is more than fuckable.

The gayest scene, possibly the gayest of Seagals career, occurs when he is sent on a sacred journey courtesy of the Eskimo elders. After wrestling a grizzly bear, he finds himself in some kind of candlelit caribou skin enclosure. On one side is a bejeweled and beautiful native woman writhing naked on a bed, heaving her sweaty breasts in his direction. On the other side is a leathery shaman hag holding a rawhide shaker. Seagal takes a long look at the exotic seductress beckoning him to join her, then turns back to the pruned old woman. He shoots a final glance at the come-hither vixen and then we witness something remarkable. We see Seagal put his hands together and literally begin to pray. Not to pray the gay away, mind you, but to pray that the bewitching little harlot disappear and leave him alone forever. And so she does!! He opts to speak with the ancient broad to complete his spiritual transformation and be reborn. That, my friends, is fucking gay.

27 bodies stack up pretty quickly in the latter half of the movie, putting it right up there with Marked for Death as one of the bloodiest Seagal flicks in the archive. We see people shot, tortured, stabbed, burned alive, and one unfortunate bodyguard is cudgeled with a whale bone. Moreover, there are plenty of trademark ass-drubbings to be found amid the carnage. Arms are snapped, wrists are reconfigured, and fingers are shaped into various letters of the alphabet.

With Michael Caine, John C. McGinley, and R. Lee Ermey on board, it cant exactly be bad, can it? Its absolutely ludicrous, yeah, but not bad. Kill Switch is bad. This is actually one of my favorite early Seagal films because the preposterousness is taken to unexplored dimensions. During the first half of the movie you have Seagal shoveling his anti-corporate, anti-oil, pro-environment propaganda down your throat and in the second half you have twenty or so murders, several of them novelty deaths, accompanied by a half-dozen large explosions. Its all very confusing. The directing and acting arent completely unbearable but there are several sluggish and unnecessary scenes that drag the running time to an hour and forty minutes. The dialogue is typically heinous, even laughably self-righteous at times, and Seagals acting is, well, rheumatic at best. Sadly, a majority of the action takes place toward the end of the movie so we must first listen to Seagals theories about manhood and all the fucking Eskimo platitudes concerning eagles and bears that amount to nothing more than slant-eyed sorcery.

The hilarity revolves around Jennings (Michael Caine), an unscrupulous oil baron who is set to launch Aegis-1, the biggest refinery in the world that happens to look like the control tower of an Imperial Star Destroyer. The problem is that he is using faulty preventers because he is shady and because the land rights will revert back to the Eskimos if he cant get the refinery running on time. Forrest Taft (Seagal) works for Jennings as some kind of supervisor but when he discovers the truth about the preventers, Jennings has him killed. Or so he thinks. Forrest is saved by the Eskimos who nurse him back to health, teach him to be one with the animals, send him on a mystical pilgrimage, and give him a snowmobile. After collecting all the irrefutable evidence he needs to topple the oil company, Forrest ruthlessly and efficiently butchers Jennings and all of his cohorts before blowing up the refinery. Why take it to court, right?

Forrest lassos, yes, lassos Jennings at the end and strings him up for a final face-to-face.

Jennings: Shoot me, you son of a bitch!

Forrest: I wouldnt dirty my bullets.

Forrest: I just gotta reach out and touch someone.

Christ, where to begin? Its almost too asinine to contextualize. Were bombarded with the tired notion of the noble savage at every turn. The harmonious, peace-loving Eskimos are at the sinister whim of a diabolical oil company with no concern for the environment. Realizing the error of his ways, Forrest is taken into their tranquil world and reinvented as the man-bear, a spirit warrior, he who will bring peace to the natives. Seagal not only plays the hero but also the role of philosopher, a sort of logician of the last frontier. Hes constantly asking profound questions like, what does one say to a man with no conscience? and, what does it take to change the essence of a man? These are questions with which I still grapple. Oddly enough, after returning from his enlightening journey to the spirit world, he promptly denounces all the hocus pocus Eskimo wizardry in favor of a calculated, murderous rampage.

Theres loads of anti-oil petitioning to be found. The natives suffer because the land is being raped and the water steadily polluted. The wildlife of Alaska is being driven from its natural habitat and Eskimo babies are arriving to mother earth with strange anomalies. Various cancers have stricken the tribe. Hell, even the chief himself is gunned down by one of Jennings goons in a supposed act of self-defense when obviously the chief is the oldest living human being on the planet. Steven just completely hurdled off the deep end with this one, which brings us full circle to the preeminent speech. Originally eleven(!!!) minutes in length, the studio demanded that it be condensed to just under four presumably because members of the screening audience had burst into insuppressible laughter, then clawed their own eyes out. We see a clichéd montage of oil-slathered birds, crop dusters, gasses spewing from corroded pipes, decomposed animals all while Seagal speaks to us wearing a breathtaking fringe jacket flecked with turquoise beads and other hallowed trinkets. How many oil spills can we endure? he asks. The plankton is dying! On and on we go before Seagal finally breaks down into a meandering tirade about how our children are being genetically damaged. Did I mention Billy Bob Thornton is in this movie?

There are several worthy candidates but Im going with the death of Hugh (Richard Hamilton) for two reasons: first, the absolute hilariousness of the whole ordeal and second, its stupid political content. So John C. McGinley and Thorgrim from Conan break into Hughs house to retrieve some EPA files for Jennings. Hugh wont budge so they flatten his fingers with a whale bone and sever his leg with an industrial pipe cutter. He moans and rolls his eyes in what is possibly the most unintentionally funny bit of acting Ive ever seen. As this is all happening were treated to a slow pan away from Hughs face, up and out of his cabin window toward the pristine snow-capped mountains in the distance. This is what courageous people will endure to protect the environment.

No, but there were a fuckton of big explosions, the biggest of which occurred in my pants.

Never pass up an opportunity to bang the chiefs daughter. Spotted Eagle, the earth is our grandma.