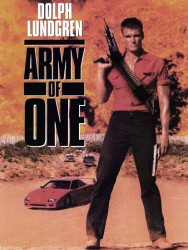 Ive seen two taglines for this film, the first being Willpower. Horsepower. Firepower. At 180 miles an hour, which I believe was attached to the original title, Joshua Tree. However, I like the U.S.A. version that comes with the working title for obvious reasons: Sometimes one man is all it takes.

Entire Story In Fewer Words Than Are in This Sentence:

A classic tale of retribution in the name of thy fellow man. Dolph seeks revenge for his slain buddy proving once again that men, not women, inspire the greatest gun battles.  Although we aren’t rewarded with a frame of his exquisite buttocks, we do see Dolph parade around in a pair of tight black Dockers through most of the film. We also see him shirtless in several scenes, abs rippling. Yet the movie doesn’t contain as much homoerotic, puffy-chested bliss as it does sheer anti-womanism. The lead female in the movie (Kristian Alfonso) is bitch-slapped, beaten, shot at, handcuffed, called a cunt, and told to shut up more times than I could count. Every man in the movie save Alfonsos boyfriend (who she is of course breaking up with) is portrayed as a gun-toting chauvinist. All in all, the most overtly gay scene occurs when Alfonso and Dolph check into a motel, but not just any motel, a themed fuck-motel! Dolph handcuffs a fresh-out-of-the-shower Alfonso to him, forces her into bed, then says, I just need an hour of sleep, then well go. I also vaguely remember Dolph handling another mans pre-mortem testicles at one point but it could’ve been a dream I had.

I tallied an applaudable 46 corpses, mostly belonging to nameless Korean car thieves who get shot-gunned to death in one ten-minute bloodfest (and I mean gallons of it) that easily trumps the final shootout in Raw Deal.

At nearly two hours in length, the movie sags like Matt Cales belly– its boring, flaccid, and filled with content youre better off not looking at. Still, Ive seen much worse from the gargantuan Swede. Dolph plays Anthony Santee, an ex-con who is out for justice, not pussy. Simply put, he takes Alfonso hostage, doesnt have sex with her, and tries to find the bad guys, namely the crooked cop (George Segal) who killed his friend and framed him for the murder of a police officer. The plot is pretty thin and the acting even thinner, but we do get to see Alfonso naked. The scene is of course nonsexual in context because in Santees world, a nice set of tits resemble nothing more than the sloping eyes of Korean gangsters.

There are some noteworthy car chases, one of which includes a black Lamborghini Countach and a super-gay red Ferrari. I think we all know who drives the Ferrari. In the end, next to Alfonsos gorgeous ass, the only saving grace of the movie is the shootout. Its odd, actually, that a shootout of such 80s action magnitude would make it so far into the 90s. While Schwarzenegger managed to successfully transcend the 90s action threshold, the pool of appropriate stars for Army of One was clearly pretty shallow at the time. The only logical explanation for such a bloodbath is the presence of Mr. Lundgren, who mostly likely demanded the extreme violence to feel more comfortable around Kristian Alfonso.

No politics, but there sure is a lot of abstinence and murder. Im reaching here but I suppose a case could be made for attention being drawn to the longstanding LAPD tradition of murdering innocent people. Since that discussion is as old as Los Angeles itself, why this yawn-a-thon to address something so widely known? Yeah, I got nothin.

There arent any post-mortem one-liners in the true 80s action sense, but there was a scene where Alfonso and Dolph are hiding out under a bridge eating cactus:

Dolph (shirt unbuttoned, chest glistening): I never said I was running for Pope.

Although it doesnt initially kill the poor bastard, Dolph plunges a rusty shard of metal into the neck of a bulky Korean, gutting him downward. The fact that Dolph slays 40+ human beings in less than ten minutes in the year 1993 with a shotgun that never runs out of shells is pretty god damn astonishing.

That hot women need to shut the fuck up. Stupid cunts.