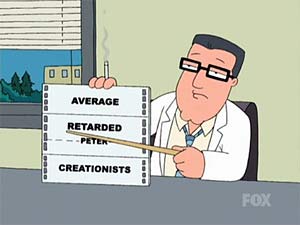 Even with the departure of George Bush, there is no doubt that the insane assault on teaching evolutionary theory in public schools will be stepped up. One only has to look at the “great” state of Texas , which has replaced one religious nut with yet another religious nut, Gail Lowe. As Steven Schafersman of Texas Citizens for Science points out, “Lowe will do what the radical religious right powers want her to do. She will not stop the continuing politicization of public education in Texas by the Fundamentalist Christians who still have positions of power and influence. It will be business as usual, as as usual, public education and the students and teachers of the state will suffer.”

Fortunately, due to the efforts of people like The National Center for Science Education, these efforts have been thwarted in every case, but the Creationists keep trying, sticking their religious noses where they do not belong. I, for one, am getting rather tired of the ignorant ramblings of Creationists who are hell-bent or replacing solid, established science with religious superstition. Why don’t Creationists just read a couple of relevant books that attempt to explain the undeniable presence of evolution in our natural world? But no, they have to insist that their ridiculous creation story deserves equal time in a thinly veiled attempt to dress up Genesis to go to school as science. The main thrust of Creationist efforts stem from their nauseating bleat that “Evolution is only a theory”. From that point they try to take it further down the slippery slope, insinuating that if it is only a theory then it must be little more than a guess and should not be considered as a viable explanation of the wide variety of life that we observe on earth today.

Well, evolution is a theory and it is also a fact. Evolution is defined as a change in allele frequency in a population over time. Evolution has been observed in nature. Evolutionary Theory, explains the mechanisms of evolution (the fact). Scientific Theories are not merely guesses as the ignorant Creationists try to portray them. Scientific Theories describe a large set of observations with as few arbitrary elements as possible. Good theories make predictions about future events and are always falsifiable. This means that there must be some way to render the theory false, if indeed it is false. A good theory also shows a mechanism, and in the case of evolutionary theory, the mechanism of natural selection has been widely observed and demonstrated. Evolutionary theory is the cornerstone of the biological sciences and without it nothing makes any sense at all. Evolutionary Theory has become stronger and stronger throughout the years despite many attempts to falsify it. Sure, scientists have disagreed about the specific mechanism of evolution, but to try to use this as a wedge to discredit evolutionary theory and sneak their god in the back door of the Science classroom is dishonest and laughable. Creationism is not a theory or a fact and I challenge any creationist to show me just one tenet of creationism that is scientific, just one. In fact, Creationism is the opposite of science. In a nutshell, science observes, then explains. Creationism starts with a rigid conclusion and then looks around for natural phenomena that might support this conclusion. This is the same thing as shooting an arrow into a wall and then painting a bull’s eye around it. Science is self-correcting and ever changing. If a theory is falsified, science picks itself up and starts looking for another explanation, for science has no other agenda. Creationism cannot be falsified, it is inflexible, never changing. Creationism is religious dogma and nothing else. 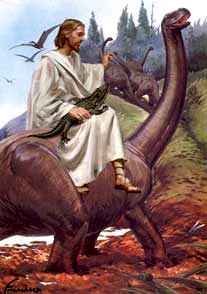 I have a few questions for Creationists:

Come on, big mouths, put up or shut up. Lets see this creationism of yours start explaining things. No one needs to defend evolution any more. That hasn’t needed to be been done for over 100 years. If you can’t get with the program, get out of the game and relegate Creationism to where it belongs, in classes on Religion, not Science. Only the irrational, the intellectually impaired and the incredibly stupid can’t see that evolution theories such as theory of change by decent through modification are the only demonstrable means of explaining the wide diversity of life that we observe on this planet. This issue makes the U.S.A. a laughingstock to the rest of the world and should have been dead and buried decades ago. It makes me sick to have to continue to fight this flood of ignorance in this day and time, but hopefully truth and science will prevail and mankind will one day throw off this yoke of myth and superstition.