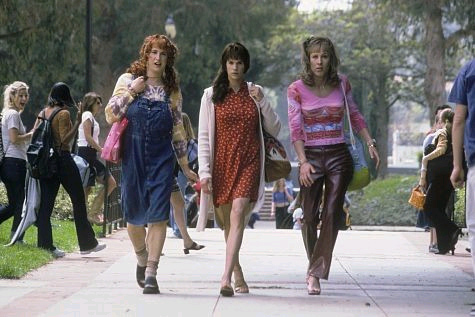 I was going to spend my Friday night watching Johnny English at the theater, but better heads prevailed and I went instead to the local video store to rent Sorority Boys, a film during which I sat as glassy-eyed and stupified as I ever have while something that was claiming to be a motion picture spun in my DVD player. I have seen worse, of course, and I know my credibility would be shot if I continued to throw around the label “worst film ever” every other week. Still, Sorority Boys is a film that must and will stand as one of the most pointless films ever made, as not one second hasn’t occurred in a dozen other similar atrocities. The stars, director, and screenwriters are unimportant (and I can’t even remember their names, thankfully) and only their complete absence from future projects will begin to make up for 88 of the longest minutes I have endured in quite some time. I can’t even be sure that I was mentally present during the movie, and as soon as this review is written I will erase every horrendous image from my scarred brain.

If you don’t remember Tootsie (or, more likely, if you are watching a film like this, you have never heard of it to begin with), Sorority Boys might seem fresh and original, although it would also be necessary that you have seen no more than three films in your entire life, all made during that brief period in the early 1970s when it was practically a criminal act to reinforce cinematic cliches. Three piggish frat dudes, members of Kappa Omicron Kappa (K.O.K., get it?), get expelled when they are accused of stealing money that was to be spent on the frat’s annual vacation/party (called the “KOK-tail Cruise”). One of the guys knows that there is a tape of the real thief, but he is unable to get it unless he dresses up as a woman and sneaks in. I am sure there are at least a dozen other ways to secure the tape, but it seems fitting that they chose the most ridiculous and one most able to be drawn out into a feature-length movie. The guys — all horribly unconvincing as women, which of course means that no one notices — attend a party and end up captured in what the frat guys call “the dogcatcher.” The three guys (as girls) are then dumped off in front of the hated sorority Delta Omicron Gamma (D.O.G., get it? huh?) The girls of that sorority are all stereotypically shy and mannish, so the nasty newcomers will fit right in. The leader of the sorority is the only one even remotely attractive, so we know within seconds that one the guys (as a girl) will fall in love with her, only to wrestle with the problem of being a guy who is dressed like a girl, which of course means that a “revelation scene” must come at the end and……..but we’ll get to that later. The sorority girls include a giant, a chick with facial hair (and what appears to be William Shatner’s toupee under each arm), the resident neurotic, and a loud gimp. As a feminist sorority, of course, the women must all be hateful, humorless, and violently opposed to the penis. So it’s accurate.

It would be silly to attack a film like this with any adult analysis, of course, because it is meant to be a juvenile diversion for teenagers and like-minded adults who would argue for bowling as the pinnacle of high culture. So I’ll try not to be predictable in my opposition. Still, even in an intentionally stupid comedy, I expect the filmmakers to at least try. Give a little fucking effort. The whole stinking lot of ’em are merely picking up paychecks, but even in such a project they can throw an orginal scene or character into the mix to keep it interesting. Sorority Boys is of a class that is a genre unto itself (the teen sex comedy, I suppose), so one would think that those involved would aspire to be in the major leagues of such a sub-group. I mean really — do we need the 37-year-old actors playing college students? Didn’t we learn our lesson with Porky’s? Do we really need the guys-who-dress-as-girls who suddenly get into their scam and actually start to care about clothes and make-up and other chick stuff? Is it necessary that the most sexist of the bunch starts to see women “as they really are” and fall in love with the most strident of the bunch, who herself wouldn’t give the guy the time of day unless he was dressed as a woman and therefore willing to open up as a woman? Huh? And why oh why must we endure yet another scene of a guy who dresses as a girl, who is then hit on by some pipsqueak, and have both end up in bed after a drunken fight? And the shower scene where the girl who wears glasses (and who is conveniently not wearing any corrective lenses for the only time in the film) gets a rubdown from the girl/guy who secretly loves her? And Christ-fucking-hell, where was a voice of reason when the screenwriters were adding the scenes where the guys-as-girls trip on their heels, fall on their faces, and endure insults from the type of guy they used to be? We’re in trouble when the most original scene (almost two full minutes by my clock) is a swordfight with multi-colored dildos. I have no doubt this is what the Founders had in mind when they crafted the First Amendment.

Needless to say, all of this ends with a Powder Puff football game, where the D.O.G. sorority must compete against the Tri-Pi group for the right to go aboard the Kok-tail Cruise, where of course the tape containing the theft is now located. Even in a film as hopelessly derivative as this one, we cannot be spared the big Knute Rockne speech and the redemption of the most insecure girl (the Giant, who hears an insult and, with her rage, breaks free for the winning touchdown). After the victory, the D.O.G.’s go aboard ship where the three guys finally reveal their true idenities before a shocked crowd, if not a surprised home audience. The guys claim to have proof of the theft, and are disbelieved and about to be thrown overboard, when suddenly a tape is produced as well as a VCR/television (which I don’t think was present five minues earlier). The boys are redeemed and all is forgiven. One of the guys is even installed as leader of the fraternity. The guys have become more sensitive to women’s issues, goodness triumphs over evil, and true loves wins out as the girl who was in love with one the girls/guys, overlooks the deception and pledges her devotion. I’ll be damned if it wasn’t heartwarming. They truly are better men for the experience. 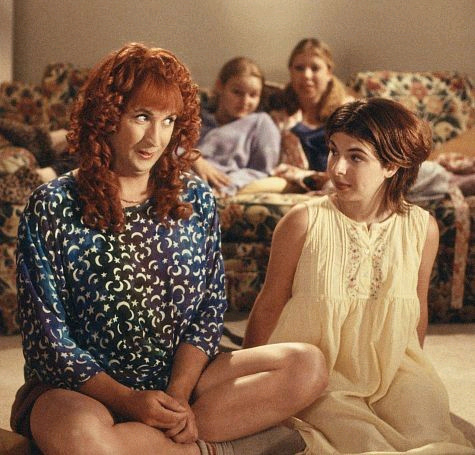 Now that I’ve wasted your time describing a film that deserves to be forgotten by the entire moviegoing world, go out and see something worthwhile. Consider yourself warned and never, ever spend and evening with this unmitigated disaster. It isn’t funny, it moves at a snail’s pace, the acting is painfully strained, and even the tits are a disappointment as they are attached to heads that contain the least advanced brains this side of a convention of Special Olympians. As the film nears its end, one of the characters says, “You all should be ashamed of yourselves.” Truer words were never spoken.